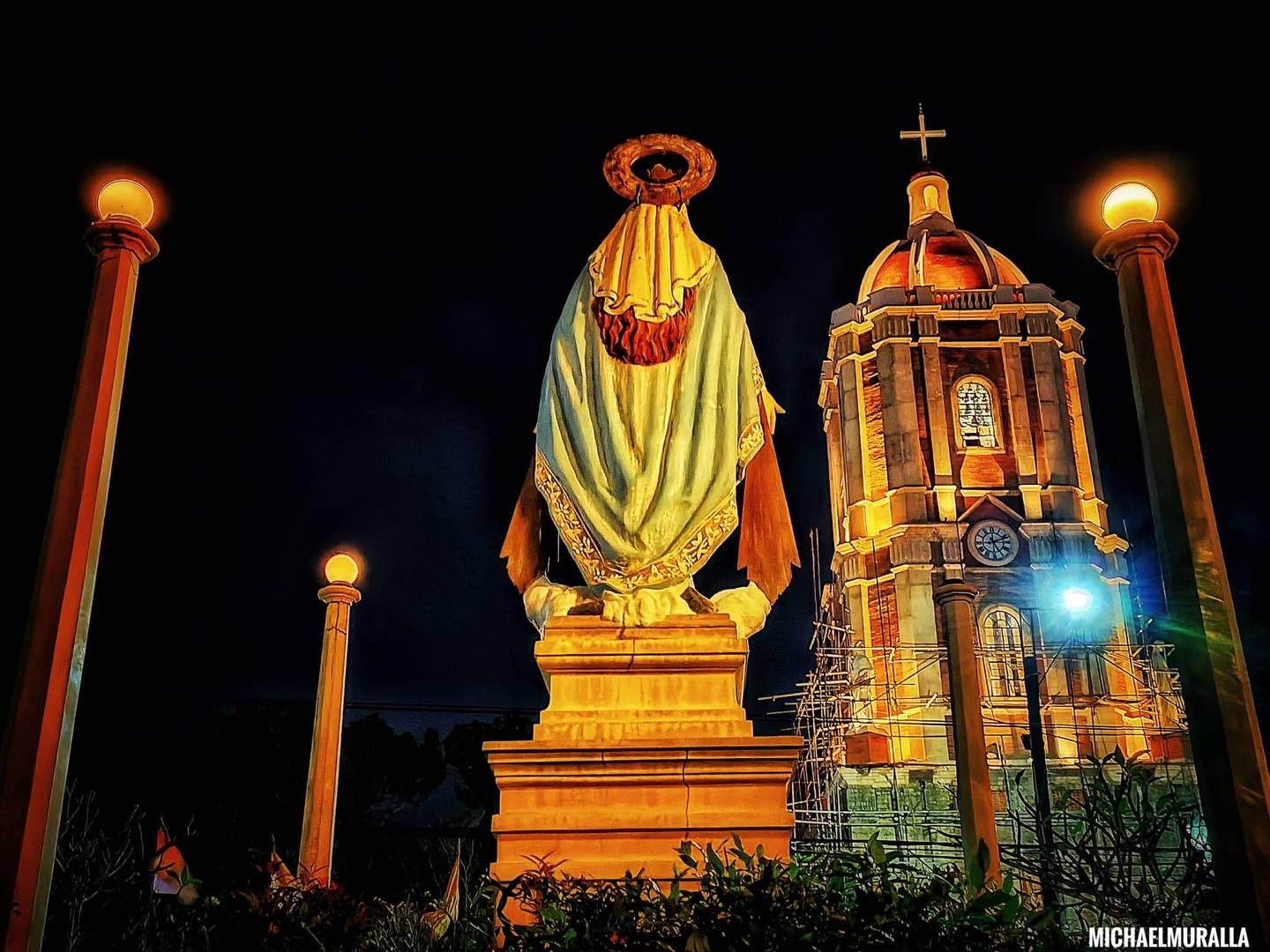 CITY'S PRIDE. The rehabilitated Jaro Belfry stands proud in the Graciano Lopez Jaena plaza, across the street from the Jaro Cathedral where a statue of the Virgin Mary watches over it.

Facebook Twitter Copy URL
Copied
Aside from the Jaro belfry and park, public plazas in the Molo and Arevalo districts, and the historic Calle Real in the middle of the city have all lit up to celebrate the long Philippine Christmas season

The  National Historical Commission of the Philippines (NHC) will turn over to the Iloilo City government the newly rehabilitated Jaro Belfry on Sunday, November 27, Mayor Jerry Treñas announced on Thursday, November 24.

Treñas, who authored Republic Act 10066 or the National Heritage Act of  2009 when he served in Congress, said the rehabilitation of the historic belfry or campanario, built in 1744, boosts local pride in the city’s history.

The belfry is also an emblem of resilience in the face of disaster, he added.

The Jaro belfry, one of a few that stand alone, as well as the Jaro Metropolitan Cathedral across the street, and the park surrounding it provide greater excitement to residents and visitors traversing Iloilo’s 11-kilometer bike network that links to historical and cultural treasures.

Aside from the Jaro belfry and park, public plazas in the Molo and Arevalo districts, and the historic Calle Real in the middle of the city have all lit up to celebrate the long Philippine Christmas season, Treñas said.

Iloilo City enters Christmas 2022 with its sixth consecutive award for its I-Bike program, and several other awards for disaster resilience, and for laying out a competitive business climate. It is also in the thick of preparations for the first full-blown Dinagyang after a forced two-year break due to the COVID-19 pandemic.

The latest rehabilitation of the Jaro belfry started in February 2022, the mayor said.

“It includes the restoration of its original design with four cardinal virtue statues on the four corners of the belfry, which had been missing for years,” the mayor said.

Before this, the National Historical Institute, predecessor of the NHC, started the reconstruction of the belfry in the late 1990s. The goal of turning the belfry into a viewing deck and tourist center, however, was scuttled because of resistance from the  Archdiocese of Jaro.

The brick and limestone belfry rises 29 meters from the ground. During the Spanish colonial period, it served as a religious structure and a military watchtower against invaders and pirates.

“Through the heritage law we passed, it can continue to stand and tell its story while witnessing ours,” said Treñas, who credited former senator Franklin Drilon, an Ilonggo for ensuring national support for the belfry’s rehabilitation.

The mayor’s remark on resilience refers to the series of major earthquakes that have struck Iloilo City.

After the belfry was heavily damaged by a strong earthquake on July 17, 1787, it took decades before Augustinian friar, Fr. Jesse Alvarez started reconstruction in 1833.

Another strong tremor damaged the belfry in the mid 1800s but by 1881, Jaro’s first bishop, Monsignor Mariano Cuartero had completed its restoration.

The belfry’s third major destruction happened during the January 25, 1948 earthquake that affected the entire Panay island.

The belfry is surrounded by a plaza. Across it is the main Jaro Cathedral, which was completed in 1874, displaying a Romanesque Revivalist design.

The plaza’s formal name is Graciano Lopez Jaena Park, for the Jaro-born journalist, orator, and reformist.

Lopez Jaena, who founded La Solidaridad, is considered among the triumvirate of propagandists against the abuses of Spanish colonial rule, with national hero Jose Rizal and Marcelo del Pilar. The NHC also rehabilitated Lopez Jaena’s monument in the park.

Less than five kilometers from Jaro plaza is the Molo plaza, whose rehabilitation was completed in June 2022.

At the center of a district originally known as Iloilo’s Parian (Chinese district), Molo birthed generations of intellectuals and political leaders. Its more secular character once earned it the label, “Athens of the Philippines”.

Across the street is the Parish of St. Anne, built in the Gothic-Renaissance style in 1860. Historical records show a 1886 visit by Rizal.

The breath-taking Molo Plaza, now with a fountain, is considered the city’s most beautiful plaza and keeps faith with the Iloilo’s iconoclastic trailblazers with Greek goddesses providing dramatic contrast to the monument of Maria Clara.

Molo’s artisan background is also featured in the thousands of stars from local textiles hanging from the plaza’s trees.

The NHCP considers Iloilo City “one of the places if not the place in the country ” with the most preserved plazas that are open for the public to visit.

“I have to admit that as I visit the other sides of the country, I would say that Iloilo was really able to preserve its open spaces, unlike in other places. Here in Iloilo most of the plazas remain open,” NHCP chairperson Dr. Rene Escalante said when he attended the turnover of the Molo plaza rehabilitation.

Then-senator Drilon, who grew up in Molo, also facilitated the creation of a P20-million restoration fund for Molo Plaza.

The Arevalo plaza and nearby church may look more humble than the centers of Jaro and Molo districts but it is just as rich in history.

Governor Gonzalo Ronquillo de Peñalosa established the former capital of Iloilo and seat of the Spanish government in Panay in 1588 and named it to honor his hometown, Avila.

The lush plaza is full of ornamental plants as the district is known as the city’s “flower garden.”

It also features a Rizal monument and markers for the late Chief Justice Ramon Avanceña and educator-feminist Sofia Reyes de Veyra. Just a few meters from the plaza are the Iloilo Sinamay Dealer center with its displays of the local history of loom weaving, and the development of the piña, and jusi textile sectors, and the Camiña Balay na Bato, a heritage house and museum. [New School] Becoming a Mayari rather than an Artemis