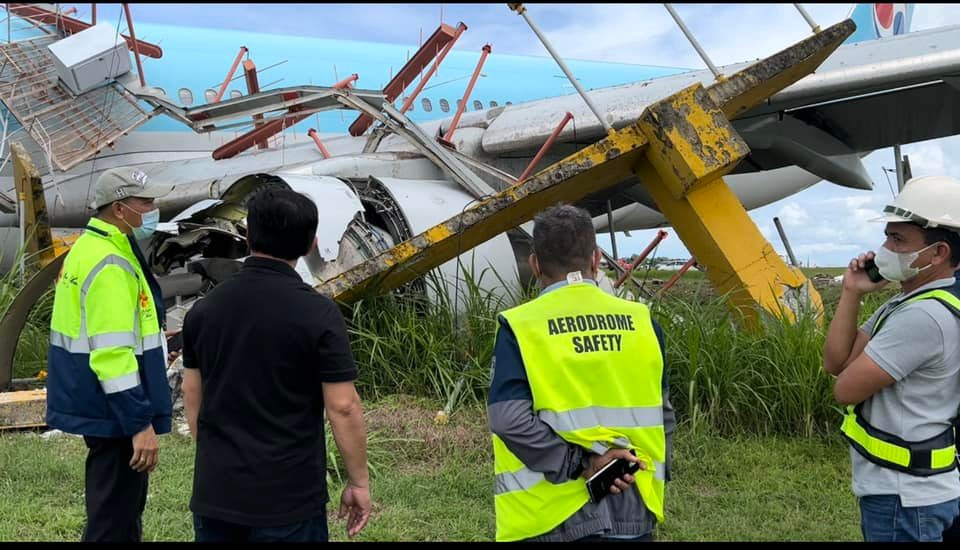 Facebook Twitter Copy URL
Copied
The crash-landing site is only 100 meters away from a residential area in Barangay Bankal, which hosts the airport

CEBU, Philippines – Mactan Cebu International Airport (MCIA) on Tuesday, October 25, resumed select flights to and from this Visayas gateway where a Korean Air A330-300 aircraft overshot the runway on Sunday evening, October 23.

Nagiel Banacia, chief of the Lapu-Lapu City Risk Reduction and Management Office (CDRRMO), said only A320 & smaller aircraft will be able to operate at the airport for now.

The Civil Aviation Authority of the Philippines (CAAP) and the Mactan-Cebu International Airport Authority (MCIAA) also limited flights between the hours of 5 am to 5pm.

On Monday, October 24, the airport temporarily resumed runway operations from 4 pm to 6 pm only for departing flights.

The Sunday plane crash occurred near runway 4 of the MCIA. Airline company Korean Air said in a statement that it was an “abnormal landing due to worsening weather conditions”.

Lapu-Lapu City Mayor Junard Ahong Chan said the accident site was only 100 meters away from a residential area near Barangay Bankal, which hosts the airport.

All 162 passengers on the aircraft and 11 crew members were rescued with no injuries reported.

The heads of Korean Air and the Korean Office of Civil Aviation were at the Mactan airport on October 25 to join Philippines officials in investigating the accident. –Rappler.com