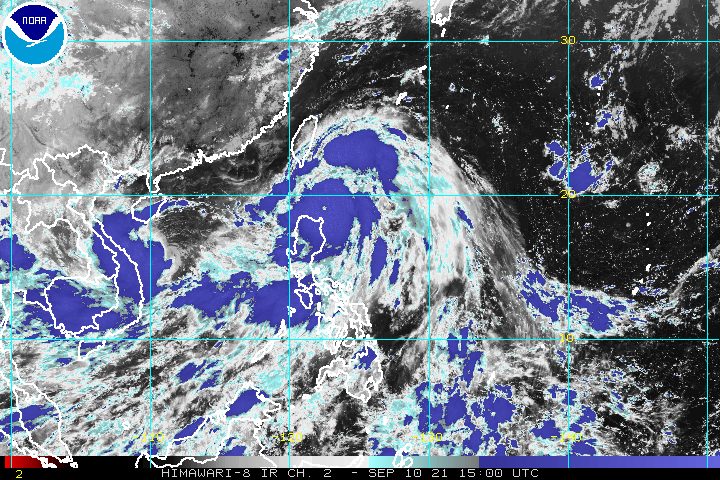 Facebook Twitter Copy URL
Copied
Typhoon Kiko (Chanthu) is 'highly likely' to make landfall in any of the islands of the Batanes-Babuyan archipelago. But landfall or not, 'catastrophic conditions will be felt' during Kiko's passage.

Typhoon Kiko (Chanthu) maintained its strength late Friday evening, September 10, while heading toward Babuyan Island, which is under Signal No. 4.

The Philippine Atmospheric, Geophysical, and Astronomical Services Administration (PAGASA) said in a briefing past 11 pm on Friday that Kiko was already 135 kilometers east southeast of Calayan, Cagayan.

The typhoon was moving northwest at a slightly faster 20 kilometers per hour from the previous 15 km/h.

Between Friday evening and Saturday evening, September 11, Kiko will move over the coastal waters of northeastern mainland Cagayan, Babuyan Islands, and Batanes, according to PAGASA.

“The possibility of landfall over any of the islands of the Batanes-Babuyan archipelago is highly likely as the typhoon moves over these areas,” the state weather bureau warned.

“Nevertheless, catastrophic conditions will be felt over these areas during the passage whether a landfall occurs or not.”

At the moment, Kiko continues to have maximum sustained winds of 215 km/h and gustiness of up to 265 km/h.

PAGASA said the typhoon is likely to maintain its strength while crossing the Babuyan-Batanes area in the first half of Saturday, but may start to weaken within the day as it undergoes another eyewall replacement cycle.

“It must be noted, however, that the possibility of reaching super typhoon category is not yet ruled out within the next 12 hours,” the state weather bureau said.

The entire province of Batanes is already under Signal No. 4. This is the list of areas where tropical cyclone wind signals are raised as of 11 pm on Friday:

If Kiko strengthens into a super typhoon, Signal No. 5 could be raised in some municipalities of Batanes and Babuyan Islands.

Rain from Kiko will persist until Saturday evening, possibly causing scattered to widespread floods and landslides.

PAGASA’s storm surge warning as of 11 pm on Friday shows there is now a moderate to high risk of life-threatening storm surges 2 to 3 meters high occurring on Saturday.

“Rising seawater along with the high waves from the shoreline moving inland may cause flooding in the low-lying coastal localities of Batanes, Cagayan including Babuyan Islands, and northern Isabela,” the state weather bureau also said.

Travel risky for all vessels, mariners advised to remain in port

After passing through the vicinity of extreme Northern Luzon, Kiko may move north or north northeast starting Sunday, September 12, and pass close to Taiwan’s east coast. Landfall in Taiwan, which is still within the Philippine Area of Responsibility (PAR), is not ruled out.

Finally, Kiko might leave PAR on Sunday evening or early Monday morning, September 13. Once outside, it will move north or north northeast over the East China Sea for the rest of Monday.

PAGASA also issued a separate advisory for the southwest monsoon or hanging habagat, which is still being enhanced by Kiko.

On Saturday, the enhanced southwest monsoon will trigger moderate to heavy rain in these areas:

“Moreover, occasional gusty winds will be experienced over these areas, especially in the coastal and upland localities,” PAGASA said.

Flash floods and landslides could occur in areas affected by the southwest monsoon.