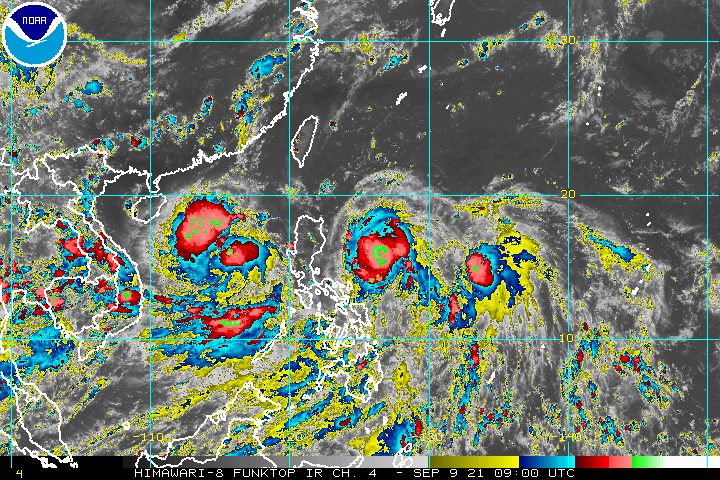 Though Typhoon Kiko (Chanthu) appeared to be shifting northward or away from the Philippines on Thursday afternoon, September 9, the state weather bureau urged Northern Luzon to prepare since the possibility of landfall in Cagayan is not yet ruled out.

The Philippine Atmospheric, Geophysical, and Astronomical Services Administration (PAGASA) said in a briefing past 5 pm on Thursday that Kiko was located 550 kilometers east of Baler, Aurora.

The typhoon is now moving west northwest at 20 kilometers per hour (km/h).

It maintained its strength, with maximum sustained winds of 195 km/h and gustiness of up to 240 km/h.

Batanes was added to the list of areas under Signal No. 1 as of 5 pm on Thursday. These are the areas where strong winds with occasional gusts are expected.

The typhoon could also start bringing rain on Friday afternoon, September 10. The provinces below should watch out for possible floods and landslides.

PAGASA added that Kiko may trigger high waves near the coast and storm surges up to 2 meters high, which may affect several coastal municipalities in Northern Luzon.

For the rest of Thursday until Friday, the typhoon will continue to affect certain seaboards of Luzon.

PAGASA said Kiko will maintain its west northwest direction in the next 12 hours, before turning northwest until Saturday morning, September 11. There may be “periods of short-term wobbling in its movement.”

The typhoon is expected to pass very close to the northeastern part of Cagayan and cross the vicinity of Babuyan Islands and Batanes between Friday afternoon and Saturday afternoon.

But PAGASA advised the public to continue monitoring updates since there is a chance of Kiko making landfall in the northeastern part of Cagayan.

After crossing Babuyan Islands and the Luzon Strait, Kiko is projected to turn north northwest and make landfall in the southeastern part of Taiwan by Saturday evening or early Sunday morning, September 12. Taiwan is still within the Philippine Area of Responsibility (PAR).

Kiko is expected to leave PAR and head for the East China Sea on Sunday afternoon.

In terms of intensity, PAGASA now sees Kiko maintaining its strength until Friday while passing close to mainland Northern Luzon. It previously said the typhoon’s peak intensity could be between 185 km/h and 205 km/h.

Jolina accelerated, moving west over the West Philippine Sea at 30 km/h from the previous 10 km/h.

It continues to have maximum sustained winds of 85 km/h, while its gustiness decreased from 115 km/h to 105 km/h.

While Jolina is moving away, it continues to enhance the southwest monsoon or hanging habagat, which is affecting the western parts of Southern Luzon, the Visayas, and Mindanao.

The enhanced southwest monsoon will continue to trigger light to heavy rain in the areas below.

PAGASA said isolated to widely scattered floods and landslides are still possible in areas affected by the enhanced southwest monsoon.

Strong winds due to the monsoon are expected in Palawan, too.

Jolina will keep moving west over the West Philippine Sea and leave PAR by Thursday evening.

It is also likely to re-intensify into a severe tropical storm on Thursday evening, and afterwards into a typhoon.

Jolina had made landfall in the Philippines nine times.