Typhoon Neneng maintains strength ahead of exit from PAR 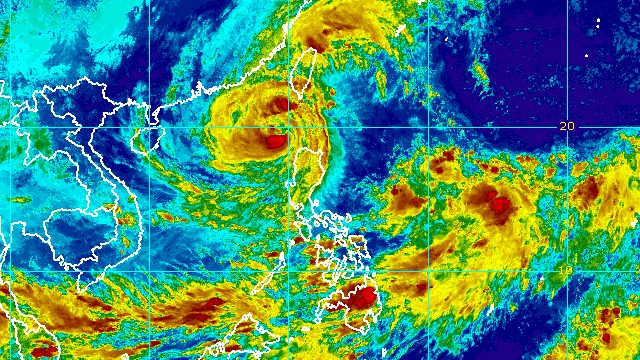 MANILA, Philippines – Typhoon Neneng (Nesat) maintained its strength over the West Philippine Sea while making its way out of the Philippine Area of Responsibility (PAR) late Sunday afternoon, October 16.

Neneng was already 210 kilometers west northwest of Calayan, Cagayan, said the Philippine Atmospheric, Geophysical, and Astronomical Services Administration (PAGASA) in a briefing past 5 pm on Sunday.

The typhoon slowed down further, moving west northwest at 15 kilometers per hour from the previous 20 km/h. It is still expected to leave PAR by Sunday evening.

Neneng continues to have maximum sustained winds of 120 km/h and gustiness of up to 150 km/h. Earlier, it underwent “extreme rapid intensification,” according to PAGASA.

The typhoon is still bringing rain on Sunday evening even as it is about to exit PAR.

PAGASA also said Neneng’s trough or extension “and the convergence of its circulation with the southwesterly winds induced by the typhoon” could bring occasional rain to the following areas:

Neneng earlier dumped torrential rain, triggering floods and landslides. It made landfall in Calayan Island as a severe tropical storm at 3:50 am on Sunday.

Meanwhile, there are no more areas under Signal No. 3, which was the highest raised due to Neneng. Here are the areas left under tropical cyclone wind signals as of 5 pm on Sunday:

PAGASA added that there may be occasional gusts in most of Southern Luzon and the Visayas, as well as the eastern parts of Central Luzon, due to the induced southwesterly winds.

The weather bureau also issued a new gale warning at 5 pm on Sunday. Neneng is causing rough to very rough seas, with waves 3.7 to 5 meters high, in the following seaboards:

The surge of the northeasterly surface windflow and Neneng may also trigger moderate to rough seas in the western seaboard of Central Luzon and the eastern seaboard of Northern Luzon. Waves could be 2 to 3.5 meters high, making conditions risky for small vessels.