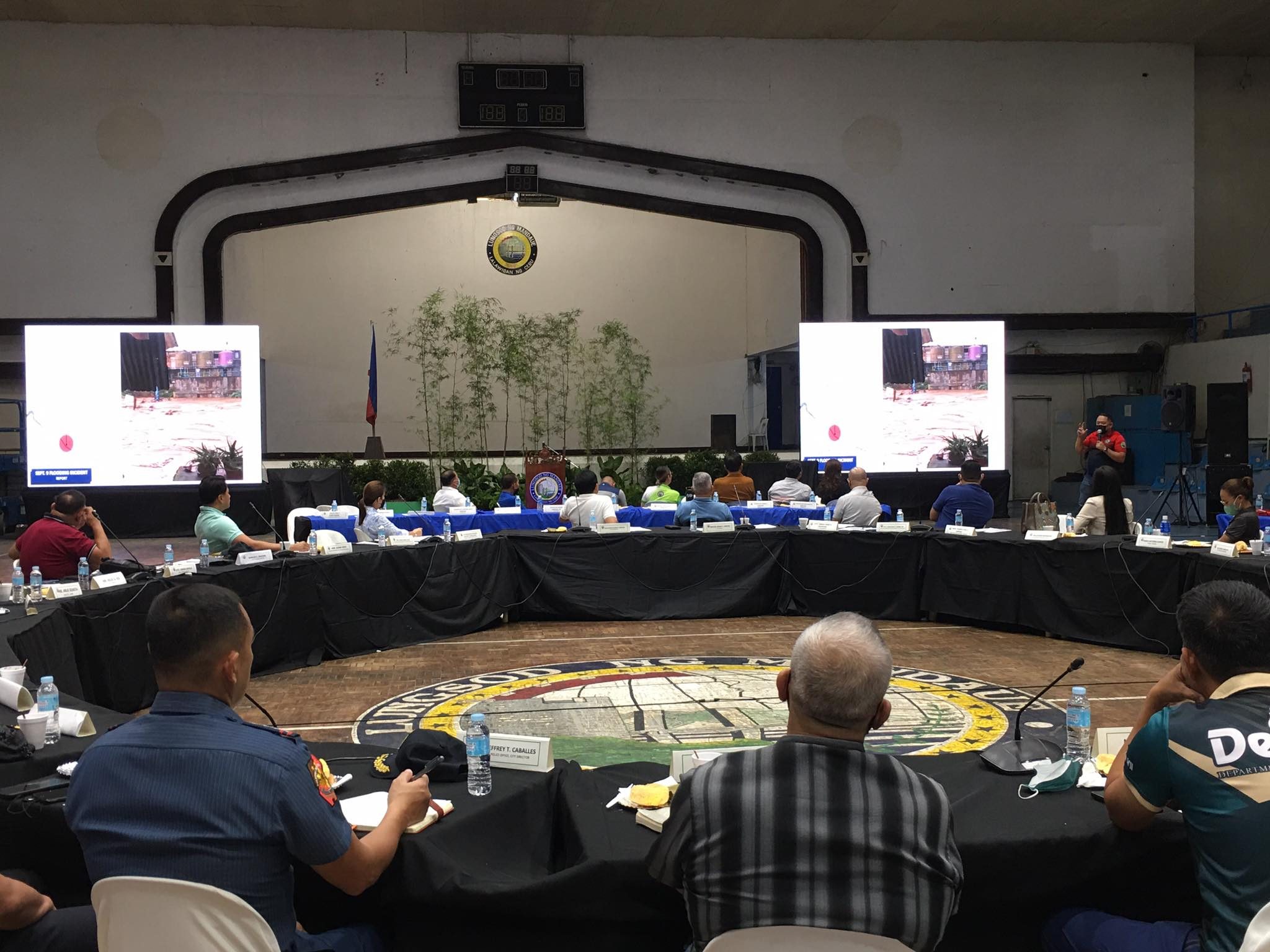 ROUNDTABLE. The Mandaue City government holds a roundtable discussion with representatives of the Cebu City government, DPWH, DENR, Police, and other agencies on Wednesday, September 14.

CEBU, Philippines – The Butuanon River overflowed due to heavy rainfall on Friday, September 9, sweeping away at least 20 barangays in Metro Cebu.

According to the Mandaue City Disaster Risk Reduction Management Office (MCDRRMO), this was the highest water level recorded by the city government in recent years.

At least 1,800 residents and 450 families were evacuated during the incident. The city government placed Mandaue City under a state of calamity on September 12.

Mandaue City Mayor Jonas Cortes met representatives of national agencies and members of the Cebu City Council on September 14 to find solutions for flooding from the Butuanon River.

Floods are not the only problems in Butuanon River, which was declared dead in 1992. A dead river is one so contaminated that it cannot support flora and fauna.

Then in February 2020, the Mandaue local government unit (LGU) declared the river off-limits to the public after tests found the presence of the polio virus.

The city faces a P5-billion funding gap so Cortes wants to pool resources and manpower.

Rappler takes a closer look at the issues and projects concerning the Butuanon River.

The city government recorded 88-millimeters rainfall within 1.5 hours on September 9.

For perspective, it usually takes 24 hours of continuous rain to catch 200 millimeters of rainwater.

Experts at the MCDRRMO said water in the Butuanon River’s watershed rose to a level that could cover more than two persons.

In 2017, the Mandaue City government created a comprehensive drainage master plan (CDMP) in coordination with the Department of Public Works and Highways (DPWH). The CDMP was intended to be the city’s guide for long-term flood control projects.

“We identified what the mitigation measures were like channel cleaning, provisions of a diversion channel, and things like that,” Ocleasa said in a mix of English and Cebuano.

But implementation of the flood control projects faced multiple delays due to lack of funding and issues involving communities of informal settler families (ISF), Ocleasa said.

“Unfortunately, the budget coming from the national government was not enough. That’s why, if you noticed, the impact of the projects was not as significant because they were done bit by bit,” he added.

“The city still needs around P5 billion-P6 billion to complete the CDMP. Right now, what we have already implemented was only (worth) P1.5 billion,” he pointed out.

Of the P1.5 billion, only P212 million was used for drainage systems and additional flood control measures at the Butuanon River.

According to Mandaue City’s Housing and Urban Development Office (HUDO), more than 650 ISFs live near the Butuanon River.

Mandaue City Research & Planning Section chief Karlo Cabahug said in a media forum on Tuesday, September 13, that with the city under a state of calamity, financial distributions can be immediately provided to affected families.

“Families affected by the flood will receive a P20,000 financial assistance,” Cortes told Rappler in an interview.

The problem is that the city still has a backlog of 8,000 informal settler households that need to be accommodated by the city government, said Lawyer Jamaal James Calipayan, the mayor’s executive secretary.

The medium-rise housing structure is currently being developed in Barangay Tipolo, near the Cebu International Convention Center (CICC).

“There are areas on the Mandaue side that we have already cleared. To address the housing of the informal settlers, we’re partnering with the Department of Human Settlement and Urban Development for our housing project,” Ocleasa told Rappler.

What is the local gov’t planning now?

Cortes told Rappler that the city and other concerned government agencies need to pool their resources and ask for monetary support from the national government.

So far, the city government and concerned organizations are looking into river clearing operations, the creation of a diversion channel, riprap (low rock walls that protect shorelines and stream beds), and gabion check dams (small barriers that slow down water flow in drainage areas or runoff channels).

“We saw that it wasn’t just the infrastructure component; there are a lot of issues, like with solid waste,” Cortes said in a mix of English and Cebuano.

Cebu City councilor Joel Garganera, head of the committee on environment and natural resources, said that the Cebu City government is willing to cooperate with Mandaue City for upcoming projects.

“It was identified that Butuanon River is shared by the city; Cebu City is upstream while Mandaue is downstream area,” Garganera said in a Facebook post.

As of this writing, the Cebu City government is conducting clearing operations along the three-meter easement of major waterways.

Cortes said that there will be more consultative meetings with national agencies to improve the city’s flood control and prevention measures. – Rappler.com