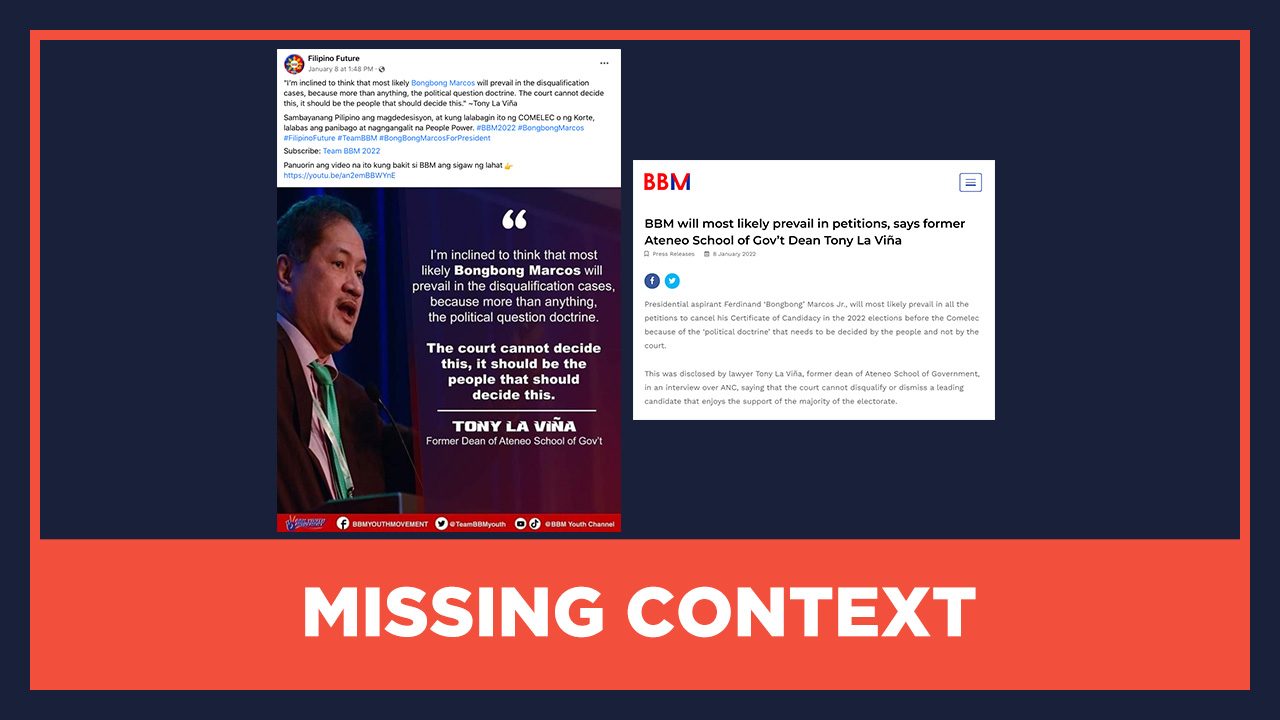 Facebook Twitter Copy URL
Copied
While it is true that La Viña shared the possible outcome that Marcos may not be disqualified from the 2022 race by virtue of the political question doctrine, this was only one of the multiple perspectives he shared on the ANC interview

A post uploaded on Facebook on January 8 by Facebook page “Filipino Future” shows a social media graphic that features former Ateneo School of Government dean Tony La Viña saying he is inclined to think that presidential aspirant Ferdinand Marcos Jr. will prevail in the disqualification cases against him on the basis of the “political question doctrine.”

In the landmark case of Tañada vs Cuenco (G.R. No. L-10520, 28 February 1957), the Supreme Court defined political questions as those that lie outside the scope of judicial questions, and are thus “to be decided by the people in their sovereign capacity, or in regard to which full discretionary authority has been delegated to the legislative or executive branch of the government.”

La Viña’s quote was from an interview aired by ANC on December 31, 2021, where he discussed multiple potential outcomes to the Marcos disqualification cases. The Comelec has consolidated two disqualification petitions against Marcos thus far, both of which cite the candidate’s tax conviction in 1995 as basis to disqualify him from the 2022 race under Philippine laws.

The issue up for debate, already branded by some as a political question, is whether Marcos’ 1995 conviction for failure to file his income tax returns from 1982 to 1985 is considered a crime involving moral turpitude, which is punishable by perpetual disqualification from holding any public office.

In the post by “Filipino Future,” the authors honed in on one of the many perspectives provided in La Viña’s interview – that the Filipino people, rather than the Comelec or the judiciary, should be the ones to decide Marcos’ disqualification case, as it supposedly involves a political question.

A press release by the Marcos campaign team likewise suggested that La Viña advocated for the Comelec or the Supreme Court to rule in favor of Marcos.

While it is true that La Viña shared the possible outcome that Marcos may not be disqualified from the 2022 race by virtue of the political question doctrine, this was only one of the multiple perspectives he shared on the ANC interview.

La Viña later addressed the press release from the Marcos camp as well as circulating memes, saying that one part of his views on the Marcos disqualification cases was “misused and taken out of context.”

La Viña provided two possible scenarios for the case: one, that the Comelec and Supreme Court would retain their authority to decide on the petitions; or, two, that they would decline to make a decision and instead give the authority to the people. Although he stressed that he is impartial to the case, he recognized that either scenario could occur.

“I certainly did not advocate that the Comelec or the Supreme Court should rule in favor of Marcos – nor did I advocate that he be disqualified. That is in fact up to the two bodies to decide that and as long as they do it with independence and not influenced or coerced by outside actors, I can support whatever outcome they decide,” La Viña said in a Facebook post.

In his post, La Viña also said that the best-case outcome of the case is for the Comelec and Supreme Court to decide on the petitions as soon as possible, so Filipinos would know who their choices are well ahead of the May 2022 elections. Should a decision be finalized on the eve of Election Day or after the elections, this would nullify the will of the people which “goes against the essence of democracy.” – Niña Diño/Rappler.com

Niña Diño is a Rappler Mover. This fact check was reviewed by a member of Rappler’s research team and a senior editor.

MANIPULATED VIDEO: Pfizer CEO plans to reduce the world’s population by half