Mar 3, 2019 6:11 PM PHT
Lian Buan
Facebook Twitter Copy URL
Copied
EXCLUSIVE: The Philippine Coast Guard has to answer for billions worth of allotments without contracts, while some projects remain unliquidated 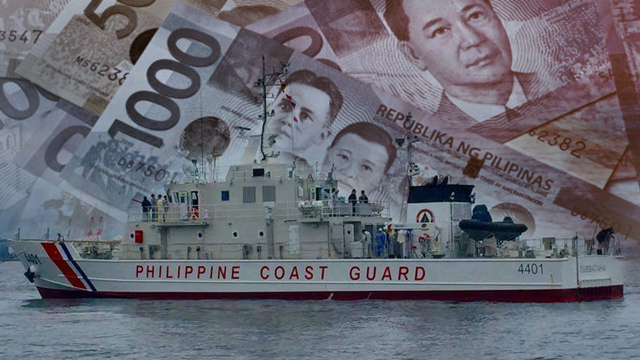 MANILA, Philippines – Auditors have flagged P3.6 billion worth of transactions in the Philippine Coast Guard (PCG), adding to the list of financial irregularities that the agency has to answer for.

AOMs are issued internally. These memoranda will give concerned agencies time to respond and address flagged issues with the Commission on Audit (COA). Flagged transactions like these are often included in the COA annual audit report (AAR), which will be publicly released starting April.

The PCG should have responded within 5 days of receipt of the AOM to explain why it issued and charged allotments even though there were still no contracts or even biddings, and, for the second issue, why almost two billion worth of programs were not liquidated.

Past anomalies have subjected top level officials of PCG to graft charges; some of them were even suspended by the Office of the Ombudsman last year. (READ: Duterte again promotes PH Coast Guard officers facing graft raps)

The AOMs highlight the need to scrutinize more how the PCG has been spending public funds.

PCG spokesperson Captain Armand Balilo did not respond to our requests for comment.

A second source privy to the issue confirmed both the existence of the AOMs and the findings of the resident auditors.

In the AOM dated February 18, 2019, auditors found that a total of P1.91 billion was fund transferred to the Philippine International Trading Corporation (PITC). The programs under this remain unliquidated as of December 31, 2018.

“Thus, the timely completion of the intended projects/programs were not assured,” said the AOM.

Funds were transferred to PITC for the “procurement activities for infrastructure, goods and services” covered by a contract dated May 10, 2017.

According to the AOM, the P1.91-billion fund transfer covered supply and delivery for 41 unliquidated projects. Purchases include guns, machinery, equipment, dogs, computers, body gears, body camera, construction and repairs, and others.

Auditors said the funds are money which were not obligated by the end of 2017 and 2018 because of failed biddings and failed awarding of contracts.

“Thus, the PCG resorted to outsourcing by commissioning PITC to conduct procurement activities in its behalf for a fee, and accordingly transfer the funds to the latter,” said the AOM. 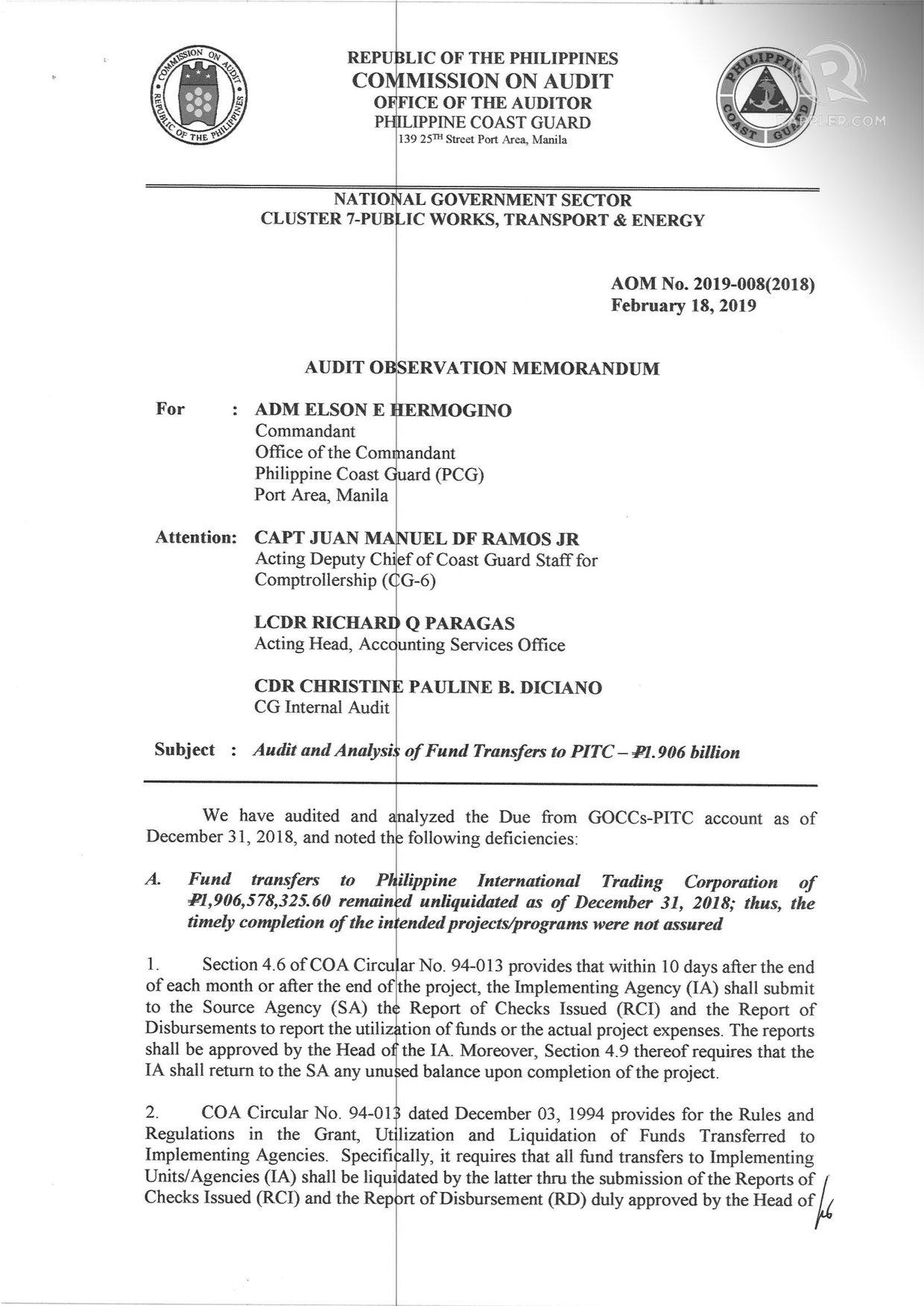 Auditors also observed that the agreement between the PCG and PITC did not indicate a delivery period, “resulting in an open-ended or indefinite period of delivery, which is detrimental to the achievement of the projects of PCG which are supposed to be scheduled and completed within the year.”

“The timely completion of the intended projects/programs was not assured. Further, the unspent amount could have been used by the government for other public purpose,” said the AOM.

Auditors also said that because the procurement was “not highly technical in nature,” the PCG could have internally handled the procurement. “As such there’s no reason to outsource by commissioning PITC to handle the job for a fee,” said the AOM.

The AOM said the PCG could have saved P69.2 million if it handled the procurement itself rather than tap PITC.

The PCG was given 5 days within receipt of the memorandum to reply. The auditors asked that the PCG submit the lacking documents and status reports, as well as to “stop issuing additional fund transfers unless the previous projects are completed and delivered.”

No contracts, no bidding

Auditors flagged 5 obligation requests, or the reservation of money, for the supply and delivery of a twin engine helicopter, weapons, weapon stations, body gears, and the construction of 7 lighthouses in Mindanao.

For the equipment, the obligation requests either did not have bidding or no contract was awarded. For the lighthouse construction, the contract has yet to be signed.

“It appears that the above-mentioned projects were only obligated at the end of CY 2018, just so to avoid reversion/lapsing of the allotment/funds. Worse, some of the above projects were not yet bidded out by PCG as of date,” the AOM said.

Auditors said that while heads of requesting offices claimed that the allotments were lawful, the documents lacked the pertinent details, such as dates of issuances of the Obligation Request and Status (ORS) and certifications of availability of allotments.

“This practice may constitute circumventing the mentioned law and regulation which may result to nullity of the obligation and payments,” the AOM said.

Auditors said that incurring obligations without valid claims violate several financial control rules such as Presidential Decree No. 1177 and the Government Accounting Manual.

Resident auditors gave the PCG 5 days within receipt to comment on the memorandum. They recommended the agency to “stop the practice of issuing obligations charged to allotments without the benefit of the approved contract or valid claims documents.” 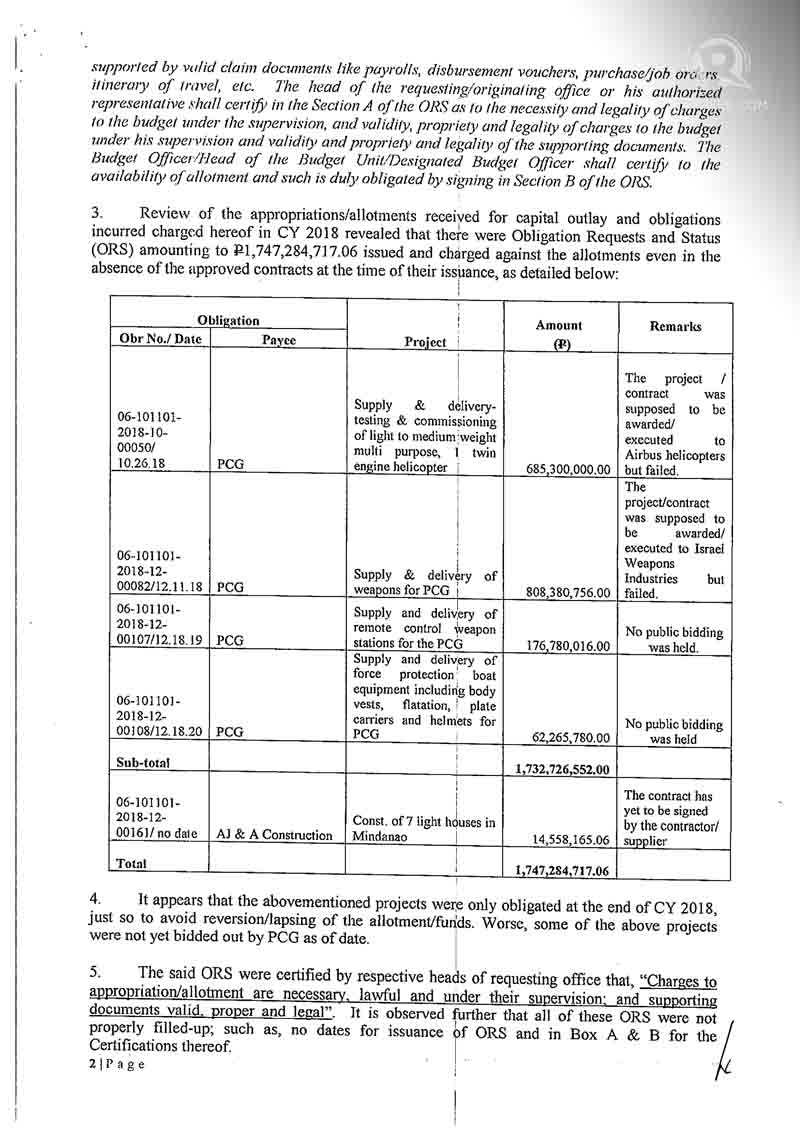