CYBER LIBEL. Rappler CEO Maria Ressa arrives at the Makati City Hall on December 15, 2020, for a hearing on a 2nd cyber libel case filed by businessman Wilfredo Keng over a tweet. 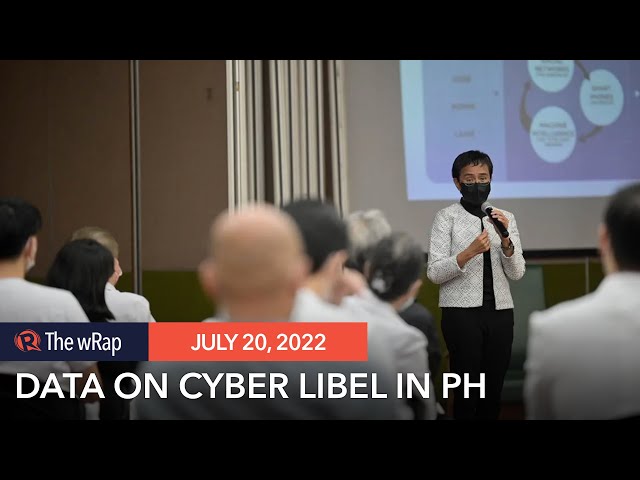 Data obtained by Rappler from the Department of Justice Office of Cybercrime (DOJ-OOC) through a Freedom of Information (FOI) request show that as of May 2022, there have been 12 convictions for cyber libel, while there have been four acquittals.

About 30% of cyber libel cases filed, equivalent to 1,131 cases, have been dismissed. There are 1,317 pending in court and 1,240 pending before prosecutors. According to the data, 44 cases were withdrawn and 22 were resolved at the level of the prosecutor. All in all, a total of 3,770 cases have been filed as of May 2022 (see table below).

The numbers “strongly imply that Philippine law on cyber libel should be decriminalized,” said lawyer Gilbert Andres of the Center for International Law (CenterLaw) which advocates for the decriminalization of libel.

Latest data from the Philippine National Police (PNP) show that cyber libel makes up 20% of the cybercrimes they investigate.

From a practical standpoint, this shows that the government might be wasting precious resources on cyber libel cases that end up in the trash bin, according to Andres.

“Decriminalizing libel and cyber libel will free our public prosecutors to allocate their precious time and energy to prosecuting criminal cases that affect the national interest and our territorial integrity,” said Andres.

The movement to decriminalize libel has an ally in the Philippine Supreme Court – Senior Associate Justice Marvic Leonen voted in 2012 to declare cyber libel unconstitutional, fearing that the 1930s definition of libel in the revised penal code is outdated and will no longer apply to the internet era.

In the case of Rappler CEO and Nobel laureate Maria Ressa, although the article in question was published months before the law’s enactment, a correction made in 2014 of a typographical error was considered a separate offense and reset the clock of the prescription period, which was one year once upon a time.

The republication doctrine was considered dangerous by free speech advocates because it could mean digitized old articles can be vulnerable to fresh libel suits.

In affirming the conviction of Ressa, the Court of Appeals further extended cyber libel’s prescription from the trial court’s 12 years to now 15 years – meaning, one can still be sued within 15 years of publication. Top Philippine lawyers have called the extended prescription period unconstitutional.

In a ruling penned by Leonen in 2021, the Supreme Court said civil libel is “more consistent with our democratic values.”

“The proper economic burden on complainants of civil actions also reduces the possibility of using libel as a tool to harass or silence critics and dissenters,” said the Leonen ruling.

United Nations Special Rapporteur on free expression Irene Khan told the UN Human Rights Council in a session this July that all over the world, criminal libel laws “are frequently used against journalists who criticize government officials or members of royal families.”

Of the 12 convicted of cyber libel in the Philippines, three are journalists, the DOJ earlier said. These include Ressa. It is unclear whether the numbers are counted one per person or one per case, as Ressa was convicted in the same case alongside former Rappler researcher Reynaldo Santos Jr.

Data from the National Union of Journalists of the Philippines (NUJP) show that of the 56 journalists sued for libel, 10 were cases for cyber libel, and the rest, under ordinary libel. 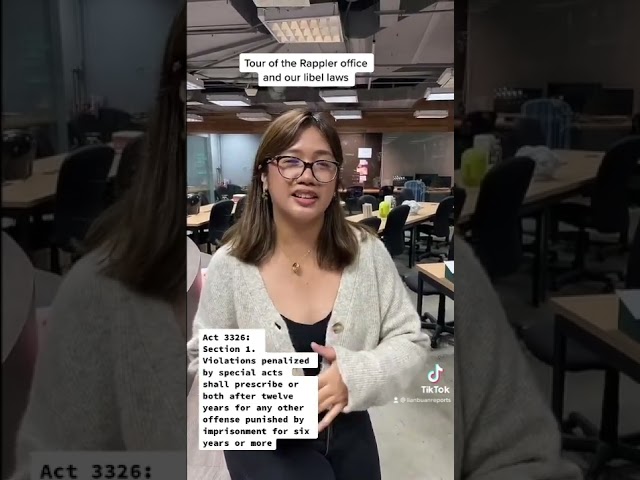 Khan has repeated her call to ban criminal libel all over the world. To date, there are still 160 countries that criminalize libel.

Ressa’s lawyers said they welcome the opportunity to challenge the constitutionality of cyber libel one more time in the Supreme Court, in the hopes of decriminalizing it.

The NTF-ELCAC, whose former officials have been sued for red-tagging, said decriminalization of libel “should be outrightly rejected.”

“Decriminalization of libel will grant Filipinos unbridled license that gives immunity for every possible use of language and prevents punishment for those who abuse freedom of expression,” said the NTF-ELCAC.

One of CenterLaw’s founders, former president Rodrigo Duterte’s former spokesperson Harry Roque, actually brought on the case before the United Nations Human Rights Committee and got it to declare that libel must be decriminalized. Roque also fought to make cyber libel unconstitutional in the Supreme Court.

Now, his CenterLaw colleagues rely on that case to continue pushing to decriminalize libel.

“Based on government data from the Office of Cybercrime and in line with the Philippines’ treaty obligations under the International Covenant on Civil and Political Rights and as expounded in Adonis [Roque’s case], it is high time that the Philippine Congress decriminalizes libel and cyber libel,” said Andres. – Rappler.com