Duterte’s loans for coronavirus and why PH might need more 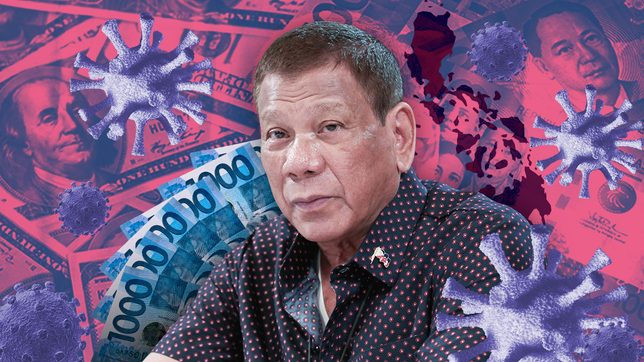 The Duterte administration is aiming for a V-shaped economic recovery from the havoc caused by the coronavirus pandemic.

From a sharp plunge to an impressive comeback, and to recover the billions of pesos and millions of jobs wiped out by the global crisis, Duterte has to spend. Specifically, Duterte has to take out billions’ worth of loans.

The economic managers expect lower tax collections or at least P90 billion in revenue shortfall, as businesses posted losses during the pandemic. The budget deficit would have to be covered by borrowings.

This is raising eyebrows. After all, the country has had a history of debt, particularly during the Marcos years, which isn’t easy to brush off. (READ: What we know so far: Funding the fight vs coronavirus)

But after prudent fiscal spending of several presidents after the Marcos dictatorship, the Philippines has earned the trust of creditors.

The question now lies in whether or not the loan proceeds will indeed reach the sectors that need them most, and not get funneled to the pockets of corrupt political elites.

Moreover, it’s all eyes on Duterte’s economic team in balancing spending and borrowings.

Borrow too much and risk the economy falling into a debt trap. Borrow too little and the economic interventions might not be enough to jolt the economy back to life.

Most importantly, the health crisis must be put under control. Otherwise, talks about spending big to shore up the Philippines’ consumer-driven economy will continue to be hounded by the virus.

According to data from the Department of Finance (DOF), loans from multilateral lenders, bonds, and grants have so far reached over $7.76 billion or around P388 billion.

The biggest lender is the Asian Development Bank (ADB), which has provided over $2.6 billion or around P130 billion.

A closer look at ADB data shows that the Philippines got the most financing compared to other member-countries.

The Philippines also secured a total of $26.36 million in grants and raised $2.35 billion in global bonds.

For this year, the government is aiming to raise $8.7 billion or P436 billion from foreign sources, according to Finance Assistant Secretary Antonio Lambino in a GMA News interview.

“We are getting the lowest interest rates that we have experienced in a long time and we are also experiencing longer maturities,” Dominguez said in a virtual briefing on July 8.

The Philippines was able to secure loans amid the global recession due to its high credit rating earned prior to the pandemic. A higher credit rating means that the government, as well as the private sector, were able to prove they can pay off debts, and in turn, borrow at lower interest for a longer period of time.

So far, the government has released P374.9 billion, the bulk of which, or over P200 billion, were for the Department of Social Welfare and Development’s Emergency Subsidy Program. (READ: 3 months after lockdown, poor Filipinos still hungry waiting for cash aid)

I think if there was ever a time to borrow for the next generation, now is a good time to do that

The funds were sourced from loans and bond sales, borrowings from the BSP, 2019 and 2020 budgets, as well as savings from the fiscal plans.

Experts like economics professor Alfredo Paloyo of the University of Wollongong in Australia believe that the country needs to negotiate for more loans to lift the economy from the pandemic.

“Now is not the time for austerity. I think if there was ever a time to borrow for the next generation, now is a good time to do that… We need to borrow for future generations today so that we can manage the economic crisis we are facing today,” Paloyo said.

“I’m much more optimistic and open to the idea that we can borrow much more than they have now only because the world multilateral agencies that typically loan out funds have a clear understanding of the situation, you know it’s quite dire, it’s once in a hundred years.”

Economists from the University of the Philippines, who include Paloyo, earlier proposed that Duterte spend at least P1 trillion to address the health crisis and the economic impact.

But there are also experts who oppose the idea of borrowing more.

Our future is being mortgaged.

Think tank IBON Foundation emphasized the country’s growing debt, which is projected to breach P9 trillion by the end of 2020 – amid the recession, job losses, and expected lower remittances from Filipinos overseas.

“Our future is being mortgaged. It doesn’t help to cure apprehensions when government says that the debt is manageable. Government has to end its anti-people neoliberal economic policies, and only then shall we be well,” IBON Foundation said.

IBON Foundation argued that instead of borrowing, the government has to refocus its resources to other projects, instead of pouring more for infrastructure projects.

Can the Philippines afford it?

On paper, the figures show the country can pay up, borrow more, and spend more.

The country’s debt relative to the size of the economy, reflected by the debt-to-gross domestic product (GDP) is at 41.5% as of end-2019, the lowest in recent history.

The government’s economic team projects debt-to-GDP to hit 50% in 2020, which is still low compared to other neighboring countries. Meanwhile, the budget deficit is projected to hit 8.1% due to revenue shortfall and more expenses.

Dominguez argued that this “conservative” level is the prudent limit for “fiscal discipline.”

The GIR or reserve cover are foreign assets that are readily available in the Bangko Sentral ng Pilipinas (BSP) for direct financing of payments imbalances. It consists of gold, foreign currencies, and investments.

Paloyo said the current fiscal space allows the Philippines to borrow and spend more money to put the country “in a position where when we come out of the health crisis we can rev up the engines of the economy again.”

With fiscal space providing sufficient breathing room, the House of Representatives has already approved a P1.3-trillion economic stimulus program through House Bill (HB) No. 6815 or the Accelerated Recovery and Investments Stimulus for the Economy of the Philippines (ARISE Philippines).

However, Acting Socioeconomic Planing Secretary Karl Chua said that the proposal was simply “not fundable,” adding that there are other ways to help out businesses and people.

The ADB has a comprehensive database on how countries are financing the pandemic fight.

While it has listed the spending per member country, it, too, has enumerated the other tools such as monetary policies that countries have utilized.

“Not all forms of macroeconomic stabilization or stimulus are created equal. Economists have long recognized, for instance, that different types of government spending or tax cuts will have different macroeconomic impacts (or multiplier effects),” the ADB said.

To illustrate this concept, the ADB likened the interventions to a workers’ salary and perks.

Aside from salary, a typical worker gets other non-monetary benefits like a credit line, housing perks, rice subsidies, as well as bonuses from an employer.

Applying the same concept to the wider economy, the government may deploy “other perks” to make full use of cash.

For instance, the BSP aggressively lowering interest rates this year encourages businesses to borrow for capital. Moreover, the additional liquidity as a result of the lowering of the reserve requirement ratio or the amount banks need to hold in their reserves injects some P200 billion in the financial system.

[Benjamin] Diokno is waiting on his dance partner as the fiscal side of the fence readies the recovery plan.

“With BSP delivering the goods early on and providing a fertile environment for a quick economic recovery, it appears that Diokno is waiting on his dance partner as the fiscal side of the fence readies the recovery plan,” ING Bank Manila Nicholas Mapa said in a policy note last May.

“Lending measures cannot alone take the place of spending measures and this is the area where help is needed: to get the vaunted Filipino consumer spending again. Thus super-sized spending efforts to address the short term need or income and the medium term goal of capacity building will need to be rolled out to complement the bevy of lending measures rolled out by the BSP,” Mapa added.

Meanwhile, Chua has insisted that cash can be multiplied when coursed through banks.

Chua, who was a former finance undersecretary, illustrated how P10 billion could multiply up to P85 billion when coursed through the Land Bank of the Philippines.

Chua said Landbank can leverage the P10 billion up to 8.5 times, providing lending support to farmers and small businesses at zero interest.

“We prefer it that way because if we give the money directly, as a subsidy or loan, it will just be P10 billion because the government is not a bank. If we course it through the banking system, that can be leveraged 8.5 times,” he said.

Regardless of the amount or how wide the fiscal space is, the pandemic is a health issue first.

Paloyo said the government must make the economy’s “hibernation” count by testing and ensuring that the spread of the virus would be contained.

Meanwhile, Mendoza posed a question on whether or not institutions can efficiently make use of the billions to be poured in for projects.

“In a crisis, fiscal space is only as good as what you do with it – how we strategically and effectively spend and invest both to protect our nation and also to build back better,” Mendoza told Rappler.

“It looks good on paper, but can our institutions efficiently disburse assistance to poor households, credit to farmers, wage subsidies to firms and workers, targeted support to key industries? History and the presently emerging evidence suggests that our agencies and institutions are strained, showing weak state capacity to execute.”

Is Duterte spending for health?

Based on proposals by the economic team, as well as those filed by legislators, it seems that the administration is determined to build its way out of the pandemic. (READ: Test, Trace, Treat (not Build, Build, Build))

(To be concluded) – Rappler.com