Celine Pialago, out of 2022 race, seeks to run past substitution deadline Former MMDA spokesperson Celine Pialago speaks to the media after filing the list of nominees of party-list group Malasakit Movement for the May 2022 elections at the in Pasay on October 6, 2021.

Former Metropolitan Manila Development Authority spokesperson Celine Pialago is not giving up on her dreams of becoming a congresswoman – that is, even if the group she wanted to represent in the party list, Malasakit Movement, has been barred from joining the 2022 elections.

Pialago is seeking to jump ship and be the nominee of another party-list group named Frontliners ang Bida.

Here’s the thing, though: the deadline for substitution of party-list nominees due to withdrawal has already passed.

Pialago first made the announcement on Facebook on Wednesday, February 9, saying the “fight continues,” and used the hashtag #From96to111.

She was referring to the number originally assigned to Malasakit Movement on the ballot, before the Comelec denied their application on January 11 and kept them out of the final list of party-list groups allowed to join the May 9 vote.

The Comelec said Malasakit Movement missed the cut because “it failed to meet the requirements for a sectoral party-list organization.” 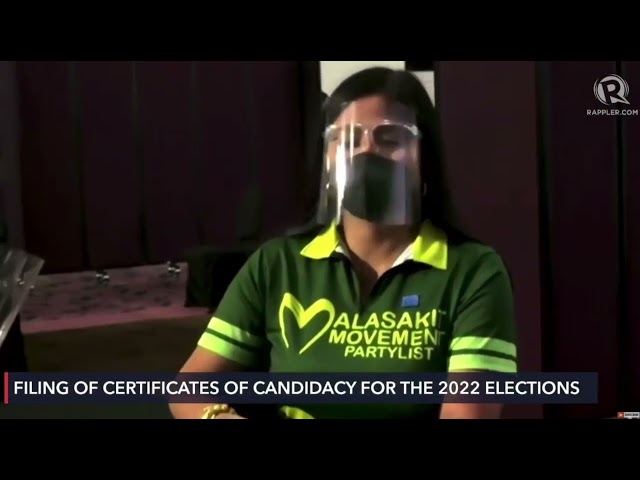 In an interview with One News on Thursday, February 10, Pialago said officers of Frontliners ang Bida – number 111 on the ballot – were in the process of deciding whether she would be the first, second, or third nominee.

“As per the advice of our lawyers, the existing nominees should resign,” she noted.

Comelec Resolution No. 10717, promulgated in August 2021, is clear about the deadline for substitution of party-list nominees who withdrew from the race: “Withdrawal of nominations and substitution of nominees due to the withdrawal of the acceptance to the nomination shall be in writing and under oath, and filed with the Law Department not later than November 15 2021.”

It continued: “No substitution shall be valid if filed beyond November 15, 2021, unless the list of nominees originally submitted has been exhausted due to death and/or incapacity of the nominees.”

Comelec spokesman James Jimenez said on Friday, February 11, that Comelec Resolution No. 10717 covers Pialago, but he would have to check the details of Pialago’s supposed substitution efforts.

“I have yet to verify that she is in fact a nominee of that party list. I would like to see the paperwork on that to see when the substitution petition was filed. Give me time to clarify that,” Jimenez said.

In the One News interview, host Ed Lingao even asked Pialago whether she could actually still run given the substitution deadline.

Pialago replied that their lawyer told her there was a “process” to be able to secure a nomination.

“I don’t want to be misquoted on what the legal remedies would be like, but we were told there’s a way. Worst case scenario, I will be supporting Frontliners ang Bida,” she replied in Filipino.

After news of Malasakit Movement’s exclusion from the ballot came out in January, netizens were quick to point out that Pialago’s chances of becoming a lawmaker have “passed away” – a reference to her infamous grammatical slip when she was a beauty pageant contestant years ago. It remains to be seen what legal processes her lawyers would take to revive Pialago’s dreams. – Rappler.com