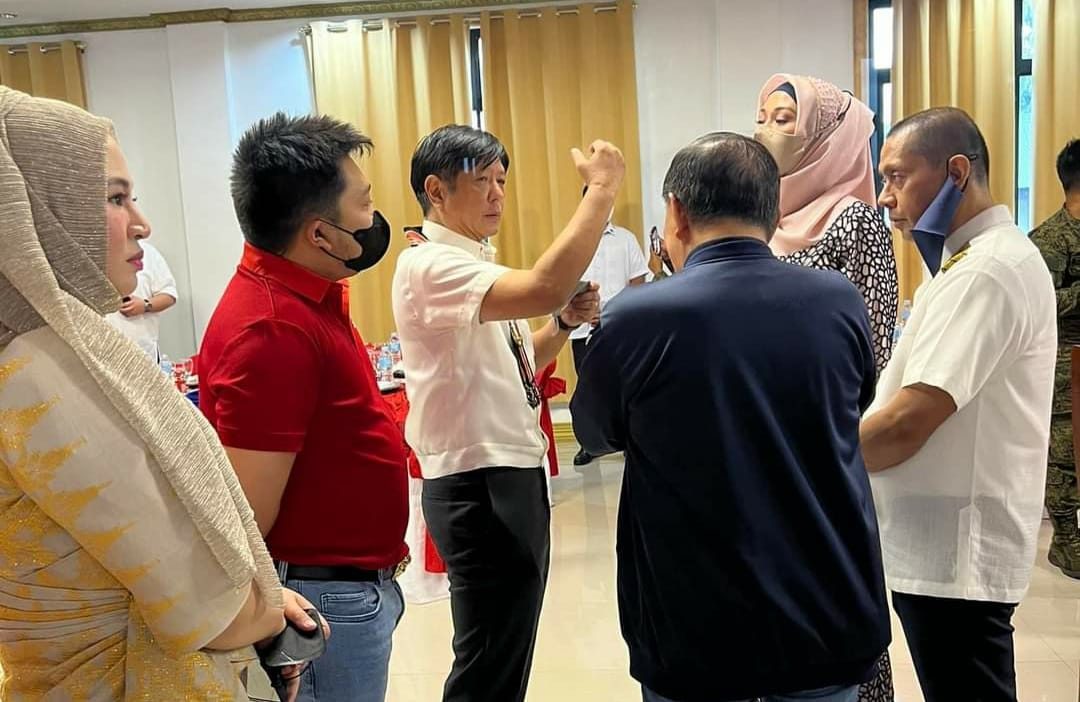 Facebook Twitter Copy URL
Copied
Days before the plebiscite, Marcos orders his staff to schedule the oath-taking of Maguindanao officials in Malacañang, as confidence in the likelihood of a ratification is boosted by the absence of opposition

Did President Ferdinand Marcos Jr. and local officials already see the ratification of the 2021 law that created two Maguindanao provinces in the bag, so much so that they already agreed on an oath-taking in Malacañang even days before the actual plebiscite on Saturday, September 17?

On Thursday, September 15, Marcos met with local officials and then instructed his staff to make arrangements for Maguindanao Vice Governor Ainee Sinsuat and her group’s Malacañang oath-taking.

Sinsuat would automatically become governor if the results of the just-concluded Maguindanao plebiscite favor the ratification of Republic Act No. 11550, the 2021 law that split the approximately 15,000-square-kilometer province into two. (LIVE UPDATES AND RESULTS: Maguindanao plebiscite)

Commission on Elections Chairperson George Garcia said the plebiscite results would be known on Sunday, September 18.

The officials’ confidence in the likelihood of a ratification was due to the absence of opposition – even Maguindanao’s warring political families had campaigned for yes votes.

Maguindanao provincial administrator Cyrus Torreña earlier said no group campaigned against the ratification of the 2021 law.

“We have not heard any opposition,” said Sinsuat after she cast her ballot on Saturday.

The vice governor’s husband, Lester, the mayor of Datu Odin Sinsuat town, said it was Marcos who called them for a meeting over lunch in Cotabato on Thursday – the same day the President keynoted a gathering of Bangsamoro officials in the city.

Lester, who had served as Maguindanao’s vice governor, said the President directed his staff to schedule the Malacañang oath-taking after being asked if a new set of local officials could take their oath of office before him.

A Maguindanao split has been a long-settled matter. It was just a matter of time. In 2006, its voters ratified a law of the now-defunct Autonomous Region in Muslim Mindanao (ARMM) that carved out 10 of their towns to form the province of Shariff Kabunsuan.

Two years later, the Supreme Court trashed the ARMM law for being unconstitutional, and killed the two-year-old Shariff Kabunsuan in the process.

Interestingly, the Thursday meeting did not include Mangudadatu or any member of her political family. The Mangudadatus are known supporters of Marcos in Maguindanao, and in Sultan Kudarat province, where the family’s members have taken turns in serving as governor.

Talk has it that Marcos’ decision to extend the term of office of Bangsamoro interim Chief Minister Ahod “Murad” Ebrahim did not sit well with the Mangudadatus. The governor’s husband, former Sultan Kudarat governor Suharto Mangudadatu, had set his eyes on the leadership of the Bangsamoro region after Marcos’ successful presidential campaign.

Vice Governor Sinsuat said she and other officials who met with Marcos were “overjoyed,” and the President was “happy” with the anticipated Maguindanao split.

This early, Sinsuat said her plans include establishing Datu Odin Sinsuat town as the seat of a new provincial government based on RA 11550, and building a capitol.

She told Cotabato-based broadcaster Bandera TV and Radio that the present Maguindanao provincial government has no property in the town where a new provincial capitol can be constructed.

Sinsuat said she would also set up provincial satellite offices in at least two towns included in the territory of Maguindanao del Norte. She and her husband were confident that the voters favored the ratification of the law during the just-held plebiscite.

Sinsuat also said the plebiscite was “very smooth,” and she hoped that the results would show overwhelming yes votes.

Her husband Lester said they monitored the turnout of voters in several towns and noted that the voting trend favored the creation of the two Maguindanao provinces.

He said he was looking forward to seeing his town become a provincial center because that would mean “more investments and more progress” for Datu Odin Sinsuat town.

“Lahat mabubuhay (Everyone will improve their lot),” the mayor said. – Rappler.com