BOXING ICON IN THE SENATE. A file photo of Senator Manny Pacquiao

There are rumblings in the birthplace of the Partido Demokratiko Pilipino (PDP), the forerunner of the current ruling party, as efforts by a faction to oust Senator Manny Pacquiao as party president allegedly goes into full swing.

An official of PDP-Lakas ng Bayan (PDP-Laban) in Cagayan de Oro City told Rappler that Pacquiao’s supporters, at least in Northern Mindanao, are getting ready to rumble.

PDP-Laban holds its national assembly on July 17, and “the special operations [to remove Pacquiao] have started,” said Marlo Tabac, the president of the PDP-Laban Council in Cagayan de Oro.

Some party officials and members, he said, were already pressuring or influencing fellow members in time for the assembly.

The plan is reportedly being hatched by a faction associated with the PDP-Laban vice chairman, Energy Secretary Alfonso Cusi.

Rappler has reached out to Cusi regarding the allegation, but he has yet to respond as of posting. We will update this story as soon as he does.

Tabac said that cracks in the PDP-Laban became more pronounced, and lines were drawn after Cusi convened a national council meeting in May, which were “against party rules.”

Tabac claimed that Presidential Spokesman Harry Roque’s subsequent pronouncement that it was party chairman President Rodrigo Duterte who ordered Cusi to call for that assembly was “just an afterthought.”

The factions first came to blows when Cusi convened the party’s national council in Cebu on May 31. Pacquiao, the party president, questioned the meeting.

Tabac said the PDP-Laban had been sharply divided in Mindanao at the very least. One group, he said, was fully behind Pacquiao’s leadership – and presidential aspirations – while the other is closely associated with the “Run Sara Run” movement that was drumming up support for the likely presidential bid of the president’s daughter, Davao City Mayor Sara Duterte.

He said Pacquiao’s supporters were recently asked by a ranking PDP-Laban official, “Are you ready to rumble?” And their response was “Yes. And that’s what we’re doing now – preparing to rumble.”

Tabac claimed that the pro-Sara Duterte faction would move for the ouster of Pacquiao from the PDP-Laban.

“If that’s the case, then the party members in Cagayan de Oro will move to have Senator Koko Pimentel replace Pacquiao as president,” he said.

Senator Aquilino “Koko” Pimentel III was the PDP-Laban president until he stepped down to become its executive vice chairman, allowing Pacquiao to assume the party presidency in time for the 2019 mid-term elections. Pacquiao was said to have financed the senatorial slate of PDP-Laban at the time.

Dr. Manuel Jaudian, PDP-Laban vice chairman for Northern Mindanao, said, “Many of the issues, including the party leadership, will be threshed out during the assembly.”

Tabac also revealed the growing resentment among the PDP-Laban “originals” who felt that newcomers had elbowed them to the sidelines.

“Where were they all these years?” Tabac said, referring to the years before 2016, or before PDP-Laban became the dominant political party in the country.

“His (Duterte’s) being in the PDP-Laban is merely for convenience,” Tabac said.

Duterte ran for president in 2016 as a subsitute candidate for Martin Diño, a PDP-Laban stalwart who was subsequently appointed as underscretary of the Department of the Interior and Local Government (DILG). – with a report from Herbie Gomez/Rappler.com 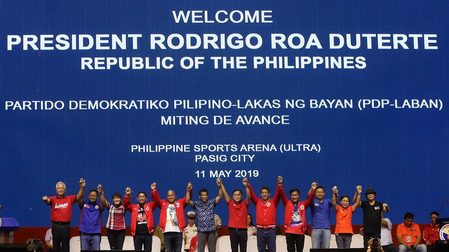