(When it comes to gender stereotyping, men usually have short hair while women have long hair. Sometimes, you’ll see me with short hair and that’s because I want to express myself as a man. When I don’t want to express myself that way anymore, I grow out my hair. That’s true. I asked our human resources person because they identify as LGBTQ+. I said, “Why do I sometimes want to be a man, but sometimes I want to be a woman? But usually I want to do what men do but I’m not attracted to women.”)

Duterte, who typically refrains from speaking about her personal life, earlier told the audience at the Quezon City hotel that she “loves the LGBT” because she identifies as a member of the LGBT community as well.

It’s not entirely clear if Duterte meant to say that she’s non-binary, gender non-conforming, or neither. The Davao mayor’s official campaign profile, which is read out loud before her daily web show Sara All 4 U, uses the pronouns “she and her” when referring to President Rodrigo Duterte’s eldest daughter.

Sexual orientation, according to the United Nations Human Rights Office’s UN Free & Equal, refers to “a person’s physical, romantic and/or emotional attraction towards other people.” It is not related to a person’s gender identity or sex characteristics.

Gender identity, meanwhile, is the “deeply felt and experienced sense of one’s own gender.” Transgender people, for instance, identify as either women or men but are classified under a different gender upon birth. Gender identity is also different from one’s sexual orientation and sex characteristics.

Gender expression, meanwhile, is how persons “express [their] gender through actions and appearance.” A person can express his or her self as combinations of masculine, feminine, neither, or both. According to UN Free & Equal, “people whose gender expression does not fit into society’s norms and expectations…often face harsh sanctions, including physical, sexual and psychological violence and bullying.” 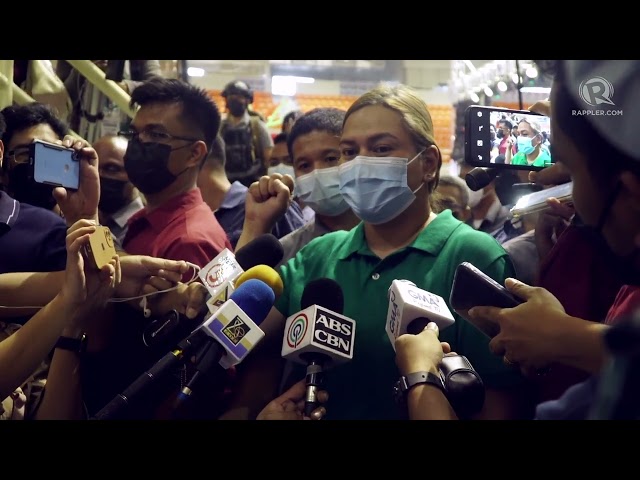 Their stand on LGBTQ+ issues?

LGBT Pilipinas describes itself as “the only alliance of LGBT+ organizations, networks and allied groups that is registered with the Securities and Exchange Commission (SEC).” In December 2019, President Duterte hosted the organization in Malacañang.

The group endorses not just Sara but her running mate, presidential candidate Bongbong Marcos Jr. According to a release from Lakas-CMD, the party Sara co-chairs, LGBT Pilipinas threw its support behind Marcos Jr. and Duterte because “they are the ones who could move the country forward and further advance the rights of the third sex.”

Neither Marcos Jr. nor Duterte, however, have actually made a clear stand on issues such as marriage equality or the SOGIE Equality Bill, at least as 2022 candidates. Sara previously voiced support for a SOGIE Equality Bill but said transgender women should first go through “sexual reassignment” before they can use women’s comfort rooms.

“This is to protect women from men pretending to be GBTQ just to access the women’s CR,” Duterte had said in 2019.

It’s a view that you wouldn’t expect from someone who claims to champion LGBTQ+ rights. Transgender women are women and transgender men and men, regardless of whether they undergo “sexual reassignment” or not. It is also generally considered inappropriate, whether you’re transgender or cisgender, to check one’s sex characteristics before entry into a bathroom.

Even as she’s made this stand in the past, vice presidential candidate Duterte urged the crowd to “not allow people to define you because of your beliefs, gender, age.”

The 43-year-old said in her work, she usually speaks to “old men.” But, she said, “I never allow them to define me as a young woman. Always, you only allow people to define you kung ano kaalaman ‘nyo at kung ano laman ng puso ‘nyo (based on what’s in your mind and your heart).”

While the Uniteam tandem has LGBT Pilipinas’ support, progressive LGBTQ+ organizations led by Bahaghari don’t back their 2022 bids. Reacting to LGBT Pilipinas’ call for Sara to run for president back in September 2021, Bahaghari issued a statement to remind LGBT Pilipinas that President Duterte does not value the LGBTQ+ community’s welfare.

As recently as 2019, President Duterte implied that being gay was a disease and used queerness as a punchline. Duterte also did not certify the SOGIE Equality Bill as urgent. LGBTQ+ rights advocates, such as reelectionist Risa Hontiveros, have said that a SOGIE Equality Bill is still the “best policy tool to protect members of the LGBT community from discrimination, harassment, and even violence.”