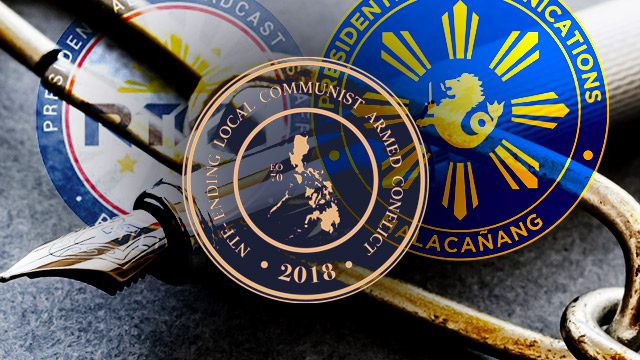 Facebook Twitter Copy URL
Copied
Supposedly at the helm of the Presidential Task Force on Media Security, the PCOO reposts misleading content against media from an anti-communist government page

MANILA, Philippines – Official Facebook pages of the Duterte government shared content that targeted local media just a week after the celebration of 2020 World Press Freedom Day. But this is not the first time verified government pages have done this.

On May 8, the Facebook page of National Task Force to End Local Communist Armed Conflict (NTF-ELCAC) posted a series of infographics that incorrectly said media giant ABS-CBN’s franchise was not renewed because “they have issues with the law.” (READ: EXPLAINER: FICTAP Issues vs ABS-CBN’s franchise renewal)

A few hours later, it shared another post that accused Rappler CEO Maria Ressa of spreading “fake news” in her interview with ABC News where she mistakenly said that ABS-CBN has 11 million workers instead of 11,000. Ressa explained that it was a slip of the tongue: “my mind raced ahead to the market cap … which was in hundreds of millions of dollars.” She apologized for the error. (READ: NTF-ELCAC ‘black propaganda’ vs Maria Ressa, ABS-CBN sparks outrage)

NTF-ELCAC’s posts were shared by the verified pages of the Presidential Communications Operations Office (PCOO) and Radio Television Malacañang (RTVM) just hours after they were posted.

Journalists, academics, and media groups condemned this behavior and called it “black propaganda offensive.” They said it’s an abuse of authority on the part of NTF-ELCAC that willfully endangers ABS-CBN’s workforce and Ressa. (READ: Media, academics condemn NTF-ELCAC’s attacks vs ABS-CBN and Maria Ressa)

This also shows how government is using its platforms, massive resources, and public funds to hit back at critics and perceived enemies.

By sharing NTF-ELCAC’s posts against ABS-CBN and Ressa, PCOO and RTVM amplified its reach from thousands to millions. More importantly, it linked legitimate concerns regarding press freedom in the Philippines with the government’s war against communist rebels.

Though the posts against ABS-CBN and Ressa have since been taken down by the 3 pages, the government has yet to apologize for the incident. The attacks by these government pages have already spread and done damage difficult to rectify.

On May 9, both Presidential Spokesperson Harry Roque and PCOO Secretary Martin Andanar disowned NTF-ELCAC’s posts and said that it was not the official position of their offices.

Like the Office of Presidential Spokesperson (OPS) and PCOO, the NTF-ELCAC is under the Office of the President. It also has a member from the PCOO: Undersecretary Lorraine Badoy, who serves as its spokesperson.

Outspoken against Duterte critics, Badoy previously called research outfit Ibon Foundation a communist front and tagged a number of activists as ranking members of the CPP-NPA-NDFP. She had been previously called out for posting inaccurate claims on her social media accounts.

On May 11, following a backlash, Andanar released Department Order No. 20-009 which limits crossposting, or sharing other pages’ content, on the PCOO Facebook page.

The department order said that only the livestreams of news events and briefings of President Rodrigo Duterte, Chief Legal Counsel Salvador Panelo, Roque, and its attached media agencies shall be crossposted on the PCOO page.

Andanar also said they have identified the individual who crossposted NTF-ELCAC’s content on PCOO’s page but did not name who was responsible. He vowed proper action will be taken and that the office will “uphold accountability on matters like this in order to minimize such unfortunate instances from happening again in the future.”

In the past, the official pages of PCOO, RTVM, and NTF-ELCAC had repeatedly amplified each other’s posts. When sharing each other’s content, these 3 pages always crossposted within the same day they were originally posted.

From July 2018 up to April 2020, these 3 pages shared each other’s content at least 35 times – not including the posts that have been taken down. RTVM posts were shared the most by the two pages.

The first one called out Inquirer.net for allegedly publishing a story that “misleads the public,” while the other post shared photos of online news magazine Pinoy Weekly and tagged it as “propaganda materials.” NTF-ELCAC shared on April 20 both posts about the arrest of Anakpawis volunteers while they were on the way to a relief operation in Norzagaray, Bulacan.

The table does not include the posts against ABS-CBN and Ressa because they were already taken down as of writing. However, based on screenshots, it was also evident that both PCOO and RTVM shared NTF-ELCAC’s posts within 24 hours. NTF-ELCAC was established through Duterte’s Executive Order (EO) No. 70. The task force “aims to implement an efficient mechanism and structure for the whole-of-nation approach to realize the aspiration of the Filipino people to attain inclusive and sustainable peace.”

The Facebook page of NTF-ELCAC was created on November 4, 2019. Its posts vary – from government advisories, anti-communist advisories, and Duterte administration accomplishments, to warnings against the spreading of false information on social media.

In May 2020, however, it started posting content against the renewal of the ABS-CBN franchise. When asked why an anti-communist task force was posting content about ABS-CBN, it claimed that the issue is being used by the Left “to sow chaos and agitate and divide the Filipino people,” PCOO Undersecretary Badoy said.

The Supreme Court defined red-tagging as “the act of labeling, branding, naming and accusing individuals and/or organizations of being left-leaning, subversives, communists or terrorists (used as) a strategy…by State agents, particularly law enforcement agencies and the military, against those perceived to be ‘threats’ or ‘enemies of the State.’” (READ: Lives in danger as red-tagging campaign intensifies)

Using data captured by Sharktank, Rappler’s own social media monitoring tool, we found that the posts of NTF-ELCAC were also often amplified by pages known to post content that red-tags progressive groups and individuals.

The visualization below shows how NTF-ELCAC is connected to the Facebook pages and groups that systematically share each other’s content. (NTF-ELCAC is the red node at the lower right side.)

If an arrow from node A points to node B, it means node B shared content posted by node A. The bigger the node and the circle, the more engagements it received within the network.

These pages are connected to an even larger network of accounts that systematically propagate each other’s content. Click on the circles to see each channel’s name, URL, and how they are connected to other channels.

Rappler fact checked a post originally published by PNP.TagapagUgnay, a page officially operated by the Philippine National Police (PNP), which falsely claimed that Kabataan Partylist representative Sarah Elago called for people power in relation to the enhanced community quarantine in late April 2020. The page has since deleted the post. The PNP said it will investigate the matter but has yet to give an update on the investigation. Other pages within this network also published this false claim.

The latest State of Media Freedom in PH report from the Freedom for Media, Freedom for All (FMFA) Network said red-tagging is one of the tactics used by the Duterte administration to stifle the media.

FMFA’s report explained that on the ground, the National Intelligence Coordinating Agency has been holding forums for members of the community media in regions where journalists were “compelled” to sign off to a “Manifesto of Commitment” to declare their support for the implementation of Duterte’s EO No. 70.

If they declined, the report said, it would have been seen as an act of defiance. (READ: Press freedom takes a hit in PH during coronavirus pandemic)

There had been incidents, too, where members of the media were publicly linked to the Communist Party of the Philippines (CPP), the New People’s Army (NPA), or the National Democratic Front (NDF). (READ: Altermidya correspondent, 4 human rights leaders arrested in Tacloban)

On January 25, NTF-ELCAC posted a quote card of Badoy linking columnist Tonyo Cruz to the CPP-NPA-NDF. The quote was lifted from an article she wrote for PNA that was published the same day.

A history of attacks against media

The PCOO is supposed to be at the helm of the Presidential Task Force on Media Security, a task force mandated to ensure the safety of journalists in the country. But NTF-ELCAC’s posts were not the first time a government agency used its official platforms to target members of the media.

In 2017, the official Facebook page of the Office of the Presidential Spokesperson (OPS) posted a negative comment targeting journalists during a livestream of a briefing attended by media. 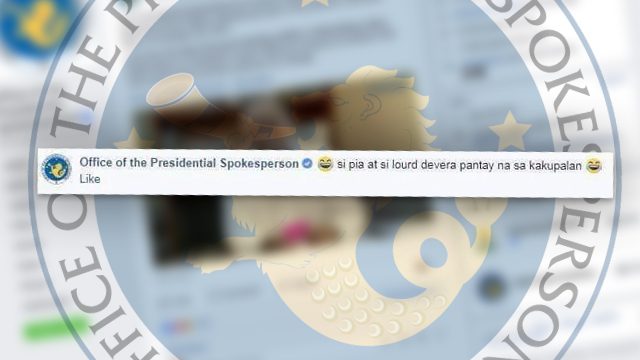 The comment, which insulted a certain Pia (not clear whether Rappler’s Pia Rañada or ABS-CBN’s Pia Gutierrez) and Lourd Devera (Lourd de Veyra) was later taken down. Malacañang said the comment was posted by someone no longer connected with the OPS, but it did not apologize for the incident. (READ: Presidential Spokesman Facebook account posts troll-like comment)

In 2019, blogger Mark Lopez went on Radio Pilipinas, a radio station owned by the Philippine Broadcasting Service under the Presidential Communications Group, to call for a protest against Rappler.

Mocha Uson, who has been appointed twice by Duterte – as PCOO assistant secretary in 2017 and again as deputy executive director of the Overseas Workers Welfare Administration in 2019 – has also repeatedly used her platform to push negative posts about the media.

Uson was the first to aggressively push the term “presstitute,” a derogatory term for members of the media who are critical of Duterte. Uson’s page has millions of followers. (READ: Press freedom after 2 years of Duterte)

In 2020, the Philippines ranked two places lower at 136th out of 180 countries on the Reporters Without Borders’ (RSF) World Press Freedom Index.

The report said two factors that pushed down the country’s rank was its state troll armies that weaponize disinformation on social media, and its intolerance of critical journalism. (READ: Philippines slips 2 places in World Press Freedom Index)

Intimidation, arrests, and murders of journalists in the country have also remained rampant, according to FMFA’s report. From January 1, 2019 to April 30, 2020, there were 61 reported incidents of threats and attacks against the media, including 3 journalists who were killed. Thirty of the 61 incidents were allegedly done by state agents.

When state powers wage a propaganda offensive against members of the media, this stifles the people’s right to a free press, which, in turn, threatens a working democracy. – with Gemma Bagayaua-Mendoza and Loreben Tuquero/Rappler.com