School time out during a pandemic? Pros and cons of an academic break 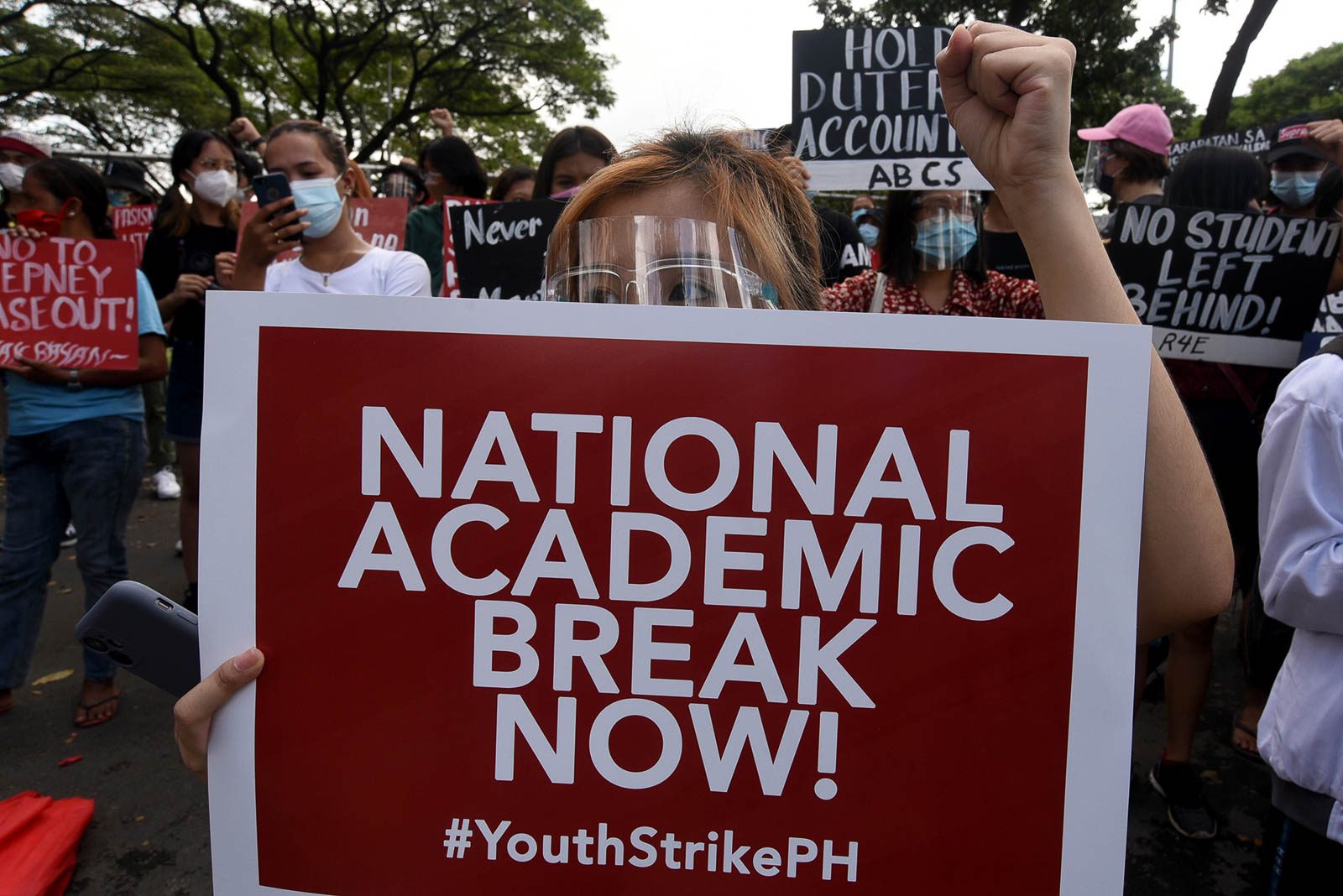 ACADEMIC STRIKE. Students from different universities and colleges gather at the gate of the Ateneo de Manila University to protest government's failure to provide concrete and effective solutions to the coronavirus pandemic, education, and calamities.

Facebook Twitter Copy URL
Copied
What exactly are the advantages and disadvantages of imposing a nationwide academic break?

Fed up with the government’s inefficiency, there’s no stopping youth activists Bern de Belen and Elise Ofilada, both from One Big Strike – a student-led movement formed at the Ateneo de Manila University (ADMU) – from holding government accountable.

“Our education is at stake here. We believe in the bigger cause that we’re fighting for. We believe that no student should be left behind in this situation,” De Belen said in a Rappler Talk interview on Tuesday, November 24.

Ofilada said that they didn’t include in the manifesto how long the academic break would be because it must be agreed upon by government, schools, and students.

Due to the continuing threat of the COVID-19 pandemic, students in the country were forced to attend classes remotely. This sparked a heated debate owing to problems pertaining to connectivity and gadgets. (READ: No student left behind? During pandemic, education ‘only for those who can afford’)

The National Telecommunications Commission said that as of December 2019, only 67% of the Philippine population have access to the internet.

Both the Department of Education (DepEd) and Commission on Higher Education (CHED) dismissed calls for a nationwide academic break – or the suspension of classes for a certain period.

CHED said it won’t issue a “unilateral” suspension of classes in the country because “different schools and different families are affected differently.” Meanwhile, DepEd said that a break would have a “massive impact” on the lives of students “economically.”

Calls for an academic break resurfaced following the consecutive typhoons that battered the country in the past weeks. This affected students’ access to education due to loss of electricity, internet connection, and the destruction of their homes. (READ: [OPINION] Our struggle is one: An open letter from students to their teachers)

What exactly are the advantages and disadvantages of imposing of a nationwide academic break?

Professor Jayeel Cornelio, ADMU director of the development studies program, said that “stopping everything right now” would allow students who are being left behind to catch up.

The Philippine Association of State Universities and Colleges estimated that a total of 44,069 college students of state universities and colleges (SUCs) were unable to enroll during the pandemic.

“Pushing through with the academic term will leave already the most vulnerable behind,” Cornelio said, adding that the pandemic has affected the finances of families, and that sustaining the education of their children is not a priority for now.

Professor Kabzeel Sheba Catapang of the University of the Philippines Los Baños shared the same sentiment, saying that it’s government’s responsibility to make education accessible under any circumstance.

“While we can always say that students may opt to not enroll or to drop subjects or courses enrolled in during a semester, that’s a choice they make for themselves and our responsibility is to provide them with learning opportunities despite the current limitations,” she said.

The pandemic has taken a toll on everyone, especially on students who are struggling to cope with the demands of remote learning.

Catapang said that the academic break would allow students and faculty members to focus on “more pressing personal concerns, such as taking care of close or distant family members greatly affected by the typhoons, cleaning or rebuilding their homes, as well as maybe restart with their main or other sources of livelihood.”

While there is still no available data to compare the number of students and teachers experiencing mental health issues, Dr Joan Rifareal of the Philippine Psychiatric Association said that she observed a rise in the number of students consulting her about anxiety and stress as the country shifted to distance learning.

An academic break would also allow students and faculty members to do volunteer work especially in these times when thousands of families are still reeling from the destruction caused by typhoons and severe flooding.

“They can focus on organizing or participating in ongoing relief operations. They may also join in pandemic-response initiatives if they have no academic concerns to think about,” Catapang said.

While imposing a nationwide academic break certainly has a positive impact on students now, both Cornelio and Catapang agree that looking at the bigger picture, such a policy would have clear negative effects, too.

The shift to remote learning created a ripple effect throughout the education sector. Some schools have shut down due to the low number of enrollees and businesses catering to students also closing shop. (READ: As distance learning kicks in, dorms, review centers lose business due to pandemic)

The DepEd reported on September 14 that at least 865 private schools are suspending their operations this year due to the low number of enrollees and their inability to meet the requirements of a distance learning setup.

On November 22, century-old College of the Holy Spirit Manila announced it “will voluntarily cease operations at the end of [academic year] 2021-2022.”

When community quarantine was imposed in the country in March, part-time lecturers stopped receiving salaries due to a “no work, no pay” policy.

CHED Chairman Prospero de Vera III, in a Senate hearing in May, said that over 50,000 part-time lecturers were needing financial assistance. These faculty members were not part of any financial subsidy program of government.

“The effect of this economic downturn is that they have no money for their children who will enroll in August,” De Vera said.

While the imposition of an academic break could bring relief to students and teachers, this would eventually affect their motivation for learning.

Cornelio said that the possibility of students losing their “momentum in learning” is high.

“The students will lose the momentum of studying. Assuming that it’s one for a year. ‘Yun ngang (For just a) semestral break, it takes time for them to feel motivated again. How much more if it’s more than two weeks or so? We always have to think of the weakest link. The smartest ones can always catch up,” he said.

The academic break would have a domino effect, affecting students’ employment opportunities if they don’t graduate on schedule, which would eventually have an impact on the economy.

“Delay in graduation impacts on finding employment opportunities. A delay of one semester already means a lot to those who will take on the role of breadwinners of their respective families,” Catapang said.

Those opposing calls for an academic freeze say that a cancellation or suspension of a term would have an impact on the number of professionals that the country could produce each year, with some arguing that this would mean there will be a year when a number of healthcare workers won’t be able to join the workforce when the country needs them the most.

But Cornelio argued that with the restrictions of the pandemic, the quality of education is not guaranteed, either.

“Carrying on with your education now is almost useless in that regard because, for example, if you’re taking nursing, engineering, and other related fields which require laboratory or practical classes, but since students can’t go out, what would the quality be like?” Cornelio stressed.

Aside from this, Cornelio said that finishing one’s degree on time during the pandemic doesn’t guarantee employment due to the economic recession.

“You might finish your education right now but given the state of the economy, there’s no assurance that you will get a job,” he said.

While the unemployment rate in the country eased to 10% in July from 17.7% in April, around 4.6 million Filipinos remained jobless, according to data from the Philippine Statistics Authority.

For Cornelio, an implementation of a nationwide academic break should be well thought out and carefully planned. While it could seem beneficial to students and other communities affected for now, it would have long-term effects on everyone.

“You cannot just think about the students alone, you have to think of other people who will be affected. It’s a balancing act,” he said. – Rappler.com