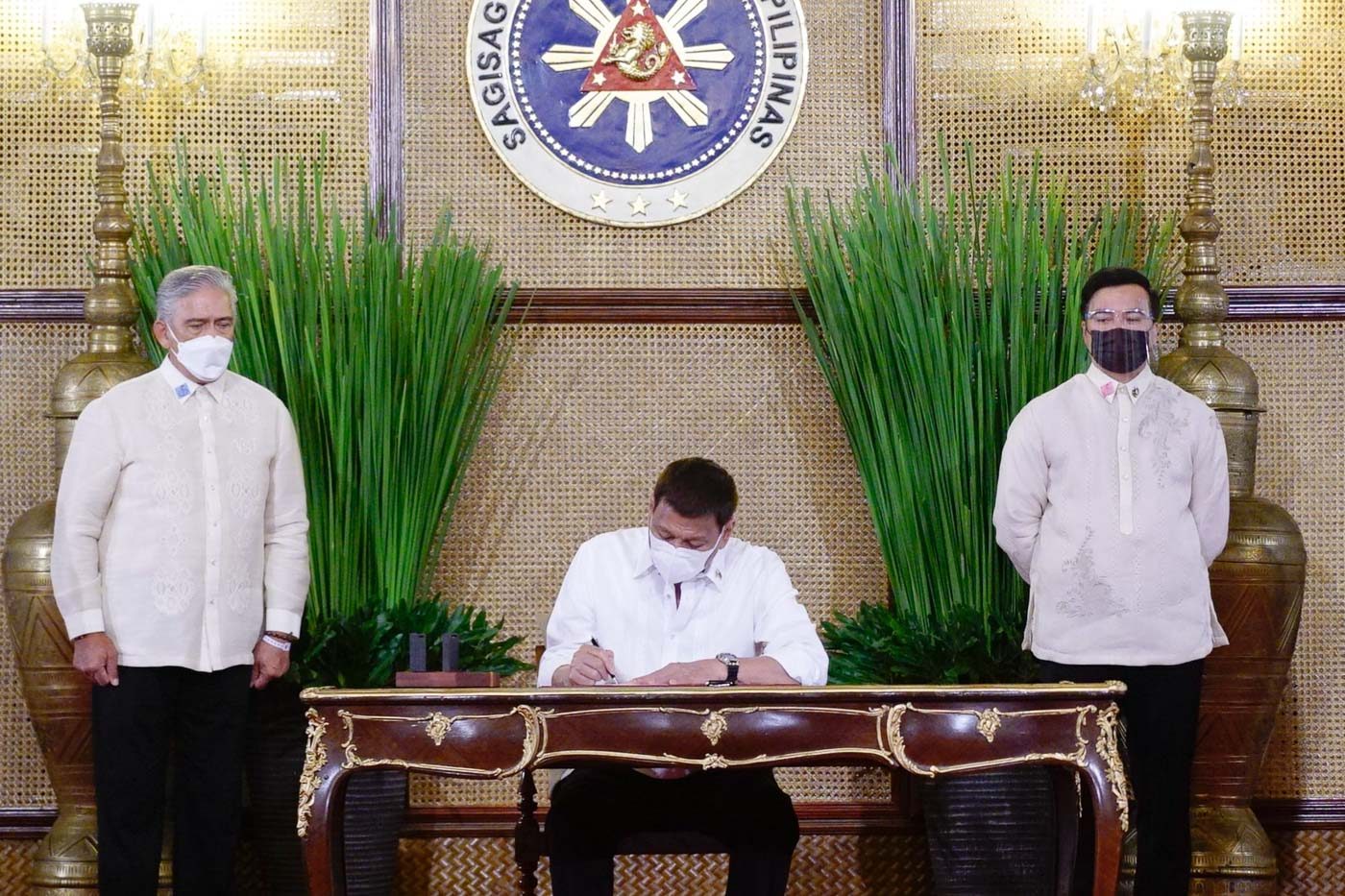 LEGISLATION. President Rodrigo Duterte leads the reenactment of the signing of several bills held at the Malacañang Palace on June 16, 2021.

Facebook Twitter Copy URL
Copied
Since Duterte will be delivering his sixth and last State of the Nation Address on July 26, we check on what has happened to the priority bills he identified a year ago

President Rodrigo Duterted, in his 5th State of the Nation Address (SONA) in 2020, identified 21 bills that the 18th Congress should prioritize and pass before he steps down from office.

The proposed legislations are a mix of long-running requests from the President and at least five that could strengthen the government’s response to the coronavirus pandemic.

Since Duterte will be delivering his sixth and last SONA on Monday, July 26, we check on what has happened to the priority bills he identified a year ago. 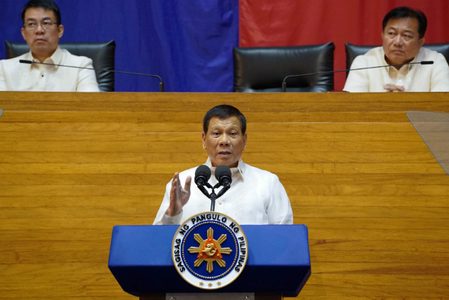 1. Bayanihan to Recover as One Act (Bayanihan 2)

The law extended the special powers Congress previously granted to Duterte to address the coronavirus pandemic and also provided a P165.5-billion fund for the health crisis.

Bayanihan 2 was supposed to expire on December 19, 2020, but was extended until June 30, 2021. It did not get another extension, despite clamor from lawmakers and advocacy groups, and the unspent fund for pandemic response has been reverted to the national treasury. (READ: Lawmakers upset by expiration of billions in unused Bayanihan 2 funds)

Status: Signed into law by Duterte in March 2021.

The law, Republic Act 11534, lowers corporate income tax in the country from 30% to 25% for large corporations and to 20% for small businesses. It also overhauls tax incentives, among others.

The Create Act was supported and aggressively lobbied for by the government’s economic team, led by Finance Secretary Carlos Dominguez III.

Status: Signed into law by Duterte in February 2021.

The law assists banks and other financial institutions with offloading their debts and managing their non-performing assets severely affected by the coronavirus pandemic.

Proponents of the law hope that, by doing so, banks will be able to provide credit to businesses and micro, small, and medium enterprises.

Like the Create Act, the Fist Act was also lobbied for by Dominguez and the rest of the economic team.

Status: Signed into law by Duterte on February 26, 2021, after he vetoed previous versions of the bill in 2019.

Republic Act 11524, or the Coconut Farmers and Industry Trust Fund Act, creates a trust fund for coconut farmers and their families. The money will come from the tax paid by coconut farmers during the Marcos regime.

It also reconstitutes the Philippine Coconut Authority and aims at improving the agency’s performance to better benefit the coconut sector.

Duterte previously vetoed versions of the bill, saying each time that it could be unconstitutional. He also cited the lack of safeguards against possible abuse.

5. Modernization of the Bureau of Fire Protection

The Senate rejected on June 3, 2021, the bicameral committee report on the bill, which was sponsored by Senator Ronald dela Rosa. This was after a provision allowing firefighters to carry guns was inserted by bicameral committee members. The chamber previously rejected this proposal.

The bicameral committee needs to resolve the specific provision before it can hurdle the Senate.

6. Creation of a Department of Overseas Filipinos

The House of Representatives in March 2020 approved on third and final reading the bill that seeks to establish the Department of Filipinos Overseas and Foreign Employment.

The Senate version of the bill, however, just reached the plenary on May 2021. There are initial questions about the need to consolidate all government offices related to the concerns of overseas Filipinos and overseas Filipino workers.

The creation of a new department solely focused on OFWs was a campaign promise of Duterte. He certified this bill as urgent on May 31, 2021.

7. Creation of a Department of Disaster Resilience

A Department of Disaster Resilience is still out of sight as the Senate is yet to deliberate on its own versions of the bill, even if the House of Representatives already passed its proposed measure.

The House previously passed a version of the bill on third reading during the 17th Congress, but the Senate failed to pass its own version.

In November 2020, Senate President Vicente Sotto III said it would be better to prioritize “rightsizing” the country’s bureaucracy first before tackling bills that would create new government agencies.

The bills aims to create an e-commerce bureau that will be tasked to regulate online selling. It seeks to give protection to consumers, paving more ways to hold accountable those behind fraudulent transactions.

In October 2020, senators and online platforms expressed concern over several provisions of the law, including who will be liable for violations of the law on their platforms.

The Senate committee on urban planning, housing, and resettlement just approved the bill in June 2021, almost three months after the House of Representatives passed its version on March 25, 2021.

If the bill becomes law, the government will give informal sector families cash aid for flat-rate rental. It seeks to give the families an opportunity to find a place to stay while relocation to a more formal housing settlement is being finalized.

10. Evacuation centers in every province, city, and municipality

A proposed law that seeks to establish evacuation centers in different places across the Philippines aims to address the problems of congestion in centers, especially during natural disasters.

The House of Representatives approved its version on March 25, 2021, while several bills remain pending at the Senate committee level.

The bill seeks to tap medical professionals and volunteers who would work part-time to augment the country’s small number of government medical workers during times of crises.

The Health Alliance for Democracy said the government should fill up vacant healthcare positions, instead of doing a “militaristic approach” through the creation of a medical reserve corps.

If signed into law, this measure would create an enhanced financing system that would provide loans and investments to fisherfolk and farmers, who belong to the poorest sectors in the country.

13. Creation of a National Disease Prevention and Management Authority

The bill that seeks to create the Philippine Center for Disease Control and Prevention (CDC) hurdled second reading at the House of Representatives on June 2, 2021. Its Senate versions remain pending at the committee level.

CDC, if created, would “be responsible for controlling the introduction and spread of infectious diseases, and shall provide consultation and assistance to other nations and international agencies to assist in improving their disease prevention and control.”

The House version places the CDC under the DOH. In May 2021, Senator Richard Gordon said he opposed this, saying the CDC “should be independent, subject to certain controls by the President or by an advisory board.”

14. Modernization of the Bureau of Immigration

Both legislative chambers are still working on their own versions of bills that seek to modernize the Bureau of Immigration.

The House of Representatives recently approved its version at the committee level and will now go through plenary deliberations. The bills filed in the Senate, however, remain pending at the level.

Lawmakers has consistently called for the modernization and overhaul of the Bureau of Immigration amid controversies and corruption allegations.

The Professional Regulatory Commission in 2020 started granting CPD units to all professionals on the frontlines during the coronavirus pandemic. Duterte said during his 5th SONA that requiring people to undergo seminars in a pandemic is “burdensome and not realistic.”

The proposed legislation aims to require accredited higher learning institutions to come up with standard basic and graduate programs for nursing education.

Reviving the death penalty for crimes related to illegal drugs is a campaign promise of Duterte, in line with his threat to eradicate drug use in the country. He asked Congress to work on the law during his SONA in 2017, 2019, and 2020.

In 2017, the House approved its version of a death penalty bill that focused on drug-related crimes. Lawmakers who opposed the measure were stripped of their House leadership positions.

The bill did not prosper following strong opposition in the Senate.

In the 18th Congress, both House and Senate versions are pending at the committee level.

In 2020, Sotto said it was unlikely that the measure would pass during current session of Congress unless if capital punishment would be limited to convicted drug lords.

Senator Nancy Binay, meanwhile, also opposed death penalty, saying that the country’s criminal justice remained flawed and there were already so many deaths around us.

The bill, if signed into law, will implement improved government housing projects for the homeless in the Philippines.

19. Unified system of separation, retirement, and pension of the military and uniformed personnel

The proposed measure will create a national agency that will work on and implement a national land use plan. This aims to classify lands in the country, whether for protection, production, settlement development, and infrastructure development.

In July 2019, Senator Cynthia Villar said the passage of the bill may earn the ire of local government officials. (READ: Land use bill, other measures protecting forests stuck in Villar’s Senate committee)

The proposed Boracay Island Development Authority (BIDA) is meant to sustain the programs and projects implemented by the national government in line with the Boracay rehabilitation ongoing since 2018. But Aklan officials opposed the proposed measure, calling out the planned move that may possibly take away powers from the local government.

– with research by Luisa Sandoval/Rappler.com