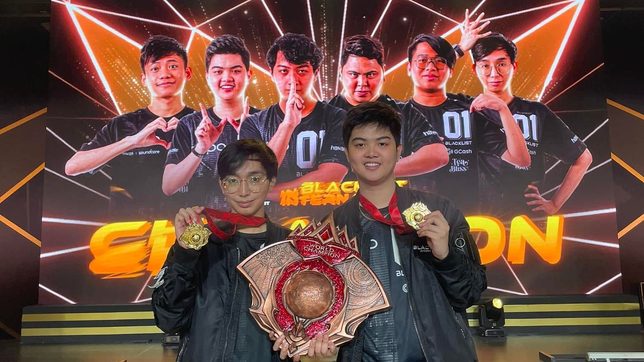 KING AND QUEEN. OhMyV33nus (right) and Wise power Blacklist International to another championship.

MANILA, Philippines – Blacklist International has dedicated a portion of its winnings from the Mobile Legends M3 World Championships in Singapore to a good cause.

The newly crowned champions vowed to help out the victims of Typhoon Odette after pocketing $300,000 (around P15 million) for ruling the M3 World Championships on Sunday, December 19, following its sweep of Onic Philippines in an all-Filipino grand finals.

“We really want to celebrate, especially these holidays, but we are also thinking of our countrymen who are victims of the typhoon,” said Blacklist head coach Kristoffer “Bon Chan” Ricaplaza.

“As a help to them, a portion of our prize will be donated to them,” Bon Chan added. “We want to celebrate the holidays giving a smile to the faces of countrymen.”

Odette ravaged the southern part of the country over the past week, displacing thousands of families and causing millions in damage to properties.

As of Monday, December 20, the Philippine National Police reported 375 deaths from the typhoon.

Miles away in Singapore, Blacklist represented the country with flying colors as it replicated the feat of fellow Filipino team Bren Esports, which ruled the previous edition of the world championships earlier this year.