ELITE. EJ Obiena takes a leap during the pole vault finals of the Tokyo Olympics.

Facebook Twitter Copy URL
Copied
‘I am hopeful that I will have my fair day in court and that I can finally end this baseless witch hunt,’ says Philippine pole vault star EJ Obiena 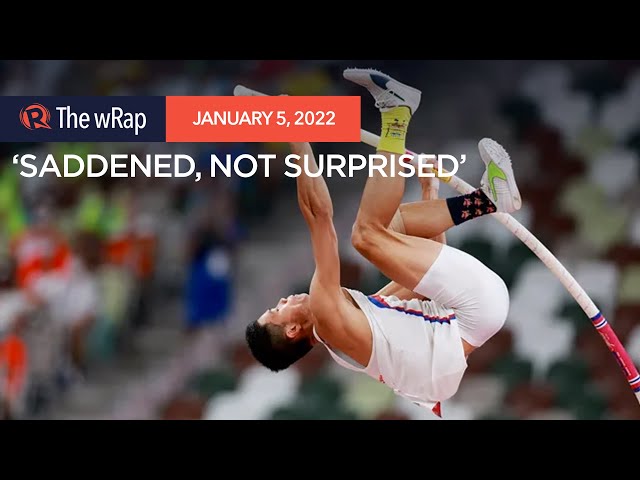 MANILA, Philippines – Embattled star pole vaulter EJ Obiena broke his silence on his impending expulsion from the Philippine Athletics Track and Field Association (PATAFA), and reiterated his desire to keep competing for the Philippines in a statement on Tuesday, January 4.

“I am saddened by the decision of the PATAFA committee, and their recommendations but I am not really surprised. I am relieved that I now finally know what I am being charged with,” he said.

“From the very start, the PATAFA proceeding had the look and feel of a witch hunt,” he continued. “My legal team can now go about the business of clearing my name and my family’s name. Righteousness always wins in the end.”

The national sports association (NSA) made headlines on Tuesday morning after announcing that Obiena will be subject to national team pool expulsion plus estafa charges stemming from alleged misappropriation of fees for his coach Vitaly Petrov. Obiena remained steadfast in his new statement, and said that not only will he be ready to face his day in court, but he will also keep training to represent the Philippines in international competitions.

“On my removal from the national pool, I am always willing to compete for the flag and the country I love with my entire being. On the recommendation of filing of estafa cases, I am ready to face all cases and charges filed against me in any court or forum,” he said.

“I am hopeful that I will have my fair day in court and that I can finally end this baseless witch hunt.”

Obiena also noted that Petrov is “unperturbed” by PATAFA’s additional complaint to the World Athletics governing body regarding his alleged violation of the Integrity Code of Conduct.

“He is a good man and has treated me like his own son. I am sorry that he is being dragged into this,” Obiena said. Since the issue between PATAFA and Obiena erupted in late November, the world’s sixth-ranked pole vaulter and his coach consistently denied all allegations made by the NSA and its president Philip Juico.

Juico has since been declared persona non grata by the Philippine Olympic Committee, which, through its president Abraham “Bambol” Tolentinto, called his recommendation to expel Obiena a “vengeful act” in a separate statement.

Tolentino also urged the Philippine Sports Commission (PSC) to do something about the issue, and labeled the commission as the “final caretaker of athletes” against “oppressive” NSAs.

Obiena then thanked the POC for “doing what is right for the nation” in allowing him to still represent the Philippines.

“I will leave everything now to my legal team. I will focus on training and jumping. My season will start in less than a month. The drama brought about by this witch hunt has taken valuable time, effort and energy away from my training and preparation,” he said.

“I do not jump for Mr. Philip Ella Juico or the PATAFA. I jump for my beloved nation,” Obiena continued.

(I am a Filipino athlete. I jump for the Philippines, and for all my compatriots.) – Rappler.com