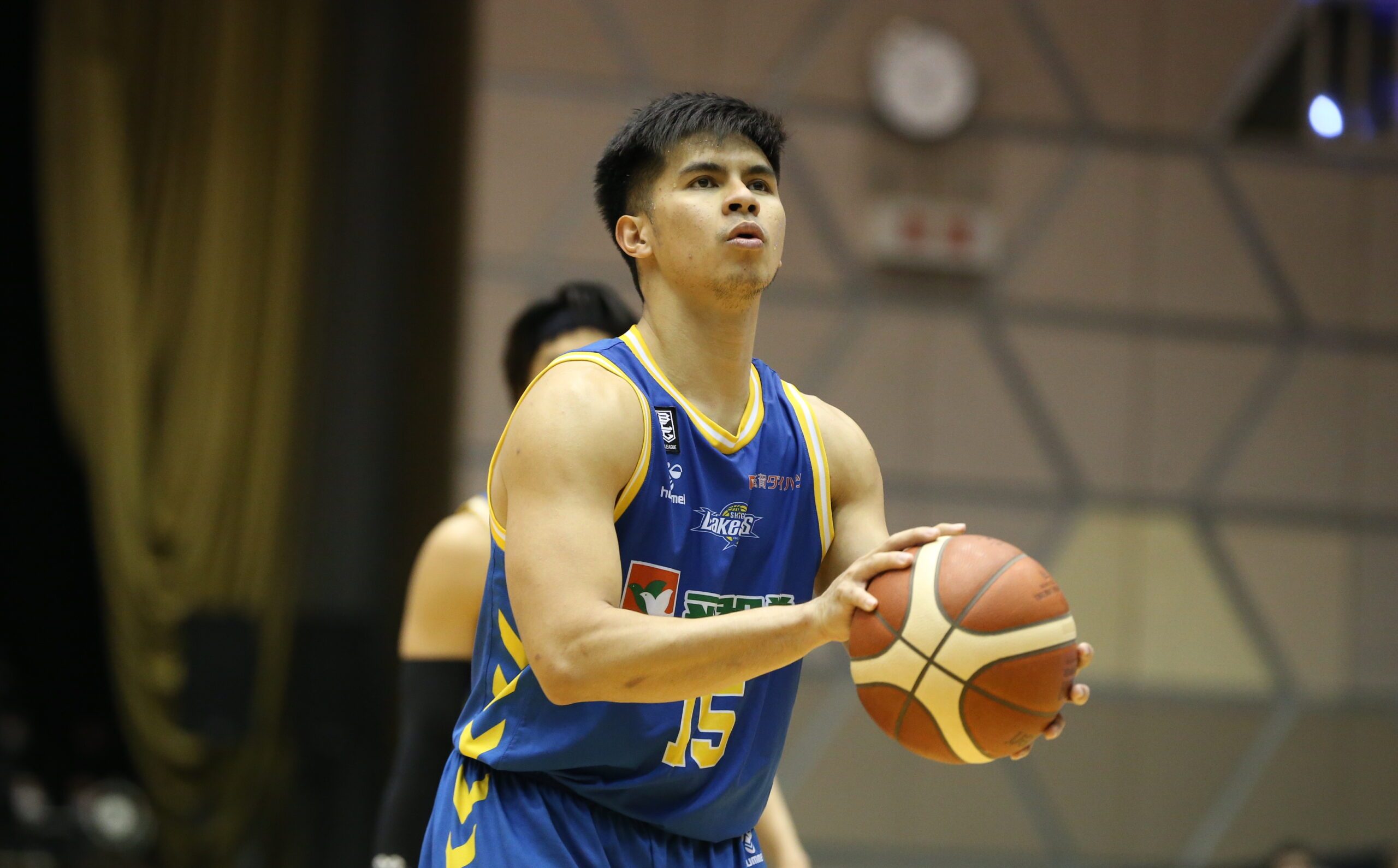 DIFFERENT LEVEL. Kiefer Ravena ups his B. League averages with a blazing week for Shiga.

MANILA, Philippines – The previous week was a packed one for Japan B. League teams as they took the floor three times. Three games in one week obviously require an elite level of conditioning from the players given the quick turnaround between games. Two Filipino imports stood out and delivered consistent outstanding performance in each of the three games they played.

Kiefer among B. League best

To describe Kiefer Ravena as phenomenal last week would be an understatement.

Ravena went toe-to-toe last Wednesday, December 15, with one of the most prolific scorers in Japan, 6-foot-4 guard DJ Newbill of the Osaka Evessa. Shiga’s Filipino playmaker more than held his own against the seasoned import.

“The Phenom” sank 5 triples en route to 28 points and issued 8 assists while Newbill, who has previously played in France, Turkey, Belgium, Australia, and Russia, had 4 triples and churned out 26 points and 6 dimes. The Shiga Lakestars, however, dropped a close one to Osaka, 81-89.

The Lakestars and Ravena finally snapped their 11-game losing streak as they defeated the Yokohama B-Corsairs, 76-72, on Saturday, December 18. Ravena had a 20-point game on 60% shooting from the field.

On Sunday, December 19, Ravena produced 22 points, but the Lakestars failed to build on their victory the previous day as they went down to Yokohama, 85-98. Ravena also registered 8 assists in each of the two games against the B-Corsairs.

In three games last week, Ravena averaged 23.3 points and 8 assists. Only four other players in the entire B. League averaged over 20 points in last week’s 3-game schedule. Of these four, only two scored more than Ravena. These are Newbill who normed 27.6 points, 8 boards, and 6 dimes, and two-time NBA champion and former Golden State Warrior James McAdoo of the Shibuya Sunrockers, who registered 28.6 points and 10.3 rebounds.

Ravena’s three-game offensive explosion upped his scoring average for the season to 13.1 points, the highest among Filipinos and the fifth-best among all Asians in the entire B. League. His 5.8 dimes rank him eighth overall among assist leaders.

The Nagoya Diamond Dolphins are streaking, and it might not be long before they find themselves among the league leaders.

The squad picked up three victories last week as they hiked their record to 14-7. They scored a crucial 82-65 win over West area rival Sea Horses Mikawa last Wednesday. The Diamond Dolphins followed it up with twin victories over the Toyama Grouses during the weekend, which enabled Nagoya to move up to third in the West and overtake Mikawa in the team standings. The Diamond Dolphins are just a game behind second-placer Shimane Susanoo Magic.

Ray Parks Jr. figured prominently in his squad’s run last week. He was on the floor for an average of 30.7 minutes in Nagoya’s three victories. His energy and activity on the floor saw him fill up the stat sheets with averages of 14 points, 3.6 rebounds, 2.6 assists, and 1.3 steals.

But Parks’ contributions went beyond the stat sheets. He was Nagoya’s utility man as he was assigned to cover Toyama Grouses’ top guns – import Julius Mavunga, fellow Filipino reinforcement Dwight Ramos, and Japanese gunner Keijuro Matsui – at different portions of the game. All three saw a drop in their production versus Nagoya.

The Diamond Dolphins have three more games scheduled for 2021, all against teams which have inferior records. They could very well end the year at second place in the West.

A win and plenty of struggle for Ramos and Toyama

The Toyama Grouses managed to pick up a win last Wednesday, but the team was still unable to earn a victory over an opponent with a winning record.

Dwight Ramos was cold from the floor on Wednesday as he shot just 22% for 8 points even as the Toyama Grouses defeated the Shinshu Brave Warriors, 92-75, in a game where fellow Filipino Matthew Aquino had his best showing (10 points built on 2 triples) in the B. League. Ramos, though, managed to pluck 6 rebounds.

Against the hard-nosed defense of Ray Parks and the Nagoya Diamond Dolphins, Ramos struggled mightily as the Grouses suffered back-to-back defeats: 85-90 on Saturday and 75-101 on Sunday.

Ramos registered an average of just 6.5 points against Nagoya, a considerable decline from his average of over 12 points a game. In their blowout loss on Sunday, Ramos was a measly 1-of-7 from the field for a 14% shooting clip and ended up with just 2 points.

To be fair to Ramos, he was not the only one among the Grouses who could not find the basket over the weekend. Julius Mavunga posted just 10.5 points versus Nagoya after scoring 21 in their win over Shinshu. Keijuro Matsui, the first Japanese to play in the US NCAA Division I, averaged 17.5 points the previous week but put up just 7.5 points in two games against the Diamond Dolphins.

Losses pile up for Thirdy, Kobe, and Javi

The teams of Thirdy Ravena, Kobe Paras, and Javi Gomez de Liaño occupy the bottom rungs in the team standings. Their agony continued last week as none of their teams triumphed in three games.

The San-En NeoPhoenix’s three losses included a narrow defeat on Sunday when they almost pulled the rug from under the Osaka Evessa in overtime, 85-90. Thirdy Ravena averaged 10 points on 31% shooting in the three games that they played. This, however, was below his average of close to 13 points on 40% shooting. He normed just 2.6 boards last week, also below his average of 4.2 rebounds.

Kobe Paras and the Niigata Albirex have lost 18 games in a row and are dead last in the entire B. League with a 2-19 record. They have lost their last seven games by an average of 20.9 points. Paras scored a total of 9 points in their three games last week, including a scoreless outing in a 31-point loss to Shimane last Wednesday. Paras has scored in double digits just twice in his last 15 games.

The Ibaraki Robots dropped two close games on Wednesday and Saturday before getting blown off the court on Sunday by the Alvark Tokyo. Gomez de Liaño saw action in all three of Ibaraki’s games last week but played only an average of just 6.6 minutes. He scored a solitary point on Wednesday and was scoreless in both games played over the weekend. – Rappler.com