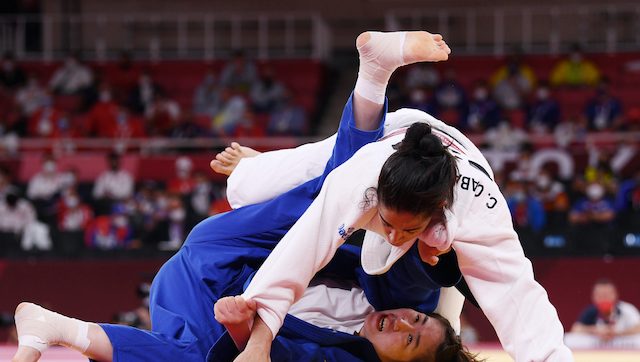 HEARTBREAK. Kiyomi Watanabe (bottom) loses to Spain's Cristina Cabana at the start of her campaign.

Kiyomi Watanabe’s Tokyo 2020 Olympics campaign came to a sudden end after falling prey to world No. 37 Cristina Cabana Perez of Spain in the women’s -63kg event on Tuesday, July 27, at the Nippon Budokan.

Cabana Perez won via ippon in the first 38 seconds of the round of 32 to knock out the Filipino-Japanese out of the quadrennial meet.

Watanabe, who entered the tournament ranked No. 41 in the world, was left in tears as the Spaniard proceeded to the round of 16.

The Filipino-Japanese judoka qualified for the Tokyo Olympics via continental allocation for Asia.

Watanabe’s name is known across Southeast Asia where she reigns as a four-time SEA Games gold medalist.

In the 2018 Asian Games, the 24-year-old came close to clinching another gold for the Philippines, but settled for a silver against Nami Nabekura of Japan.

She was chosen to be the Philippines’ female flag bearer with boxer Eumir Marcial in the opening ceremony last Friday, July 23. – Rappler.com