Facebook Twitter Copy URL
Copied
The Ateneo Blue Eagles and the UP Fighting Maroons are still the UAAP coaches’ near-unanimous picks as teams to beat, while the battle-tested FEU Tamaraws also garner a lot of approval around the league

MANILA, Philippines – As per tradition before every UAAP season, men’s basketball coaches picked their top teams to beat entering the highly anticipated Season 84 on Saturday, March 26, and three schools popped up near-unanimously: Ateneo, UP, and FEU. Here’s why:

The Ateneo Blue Eagles once again proved that their long-term development program is second to none.

Former US NCAA recruit Chris Koon is also set for his debut with the defending champions alongside Dave Ildefonso’s homecoming, while star rookie Forthsky Padrigao is ready to strut his stuff with his kuyas at the seniors level.

Moving over to the other side of Katipunan, the UP Fighting Maroons transitioned beautifully following a mass exodus of their own, as names like former MVP Bright Akhuetie, Kobe Paras, Juan and Javi Gomez de Liaño, Jun Manzo, and Jaydee Tungcab looked ahead to greener pastures.

Filling that huge void is the core of the championship-winning NU Bullpups, namely Carl Tamayo, Gerry Abadiano, Terrence Fortea, and head coach Goldwin Monteverde, who stepped in as Bo Perasol moved on to a managerial role with the team.

Veterans Ricci Rivero, Noah Webb, and James Spencer are expected to lead the team on and off the court, while key transferees Malick Diouf of CEU, and CJ Cansino and JB Lina of UST are poised to have a big role in the loaded rotation of the Season 81 runners-up. 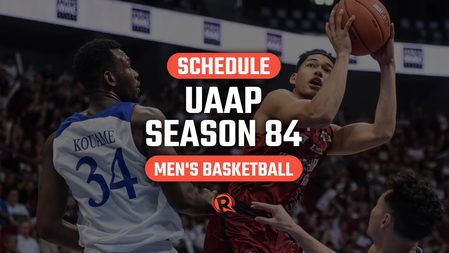 The FEU Tamaraws are poised to disturb all the hype emanating from the two Katipunan schools, and make another deep run thanks to their healthy balance of solid recruitment and time-tested development.

Holdover guards LJ Gonzales, Royce Alforque, and Xyrus Torres will share the backcourt with another homegrown star in RJ Abarrientos, while foreign student-athlete Emman Ojuola and 6-foot-5 prospect Cholo Anonuevo are out to prove they can dominate in the UAAP after some overseas exposure. Other schools mentioned by coaches in the Season 84 press conference Wednesday at the TV5 Media Center in Mandaluyong were the DLSU Green Archers led by Justine Baltazar, Mark Nonoy, and Evan Nelle, and the UST Growling Tigers led by Sherwin Concepcion and Joshua Fontanilla. – Rappler.com