Zavier Lucero takes bittersweet exit in stride, thanks UP for memorable year 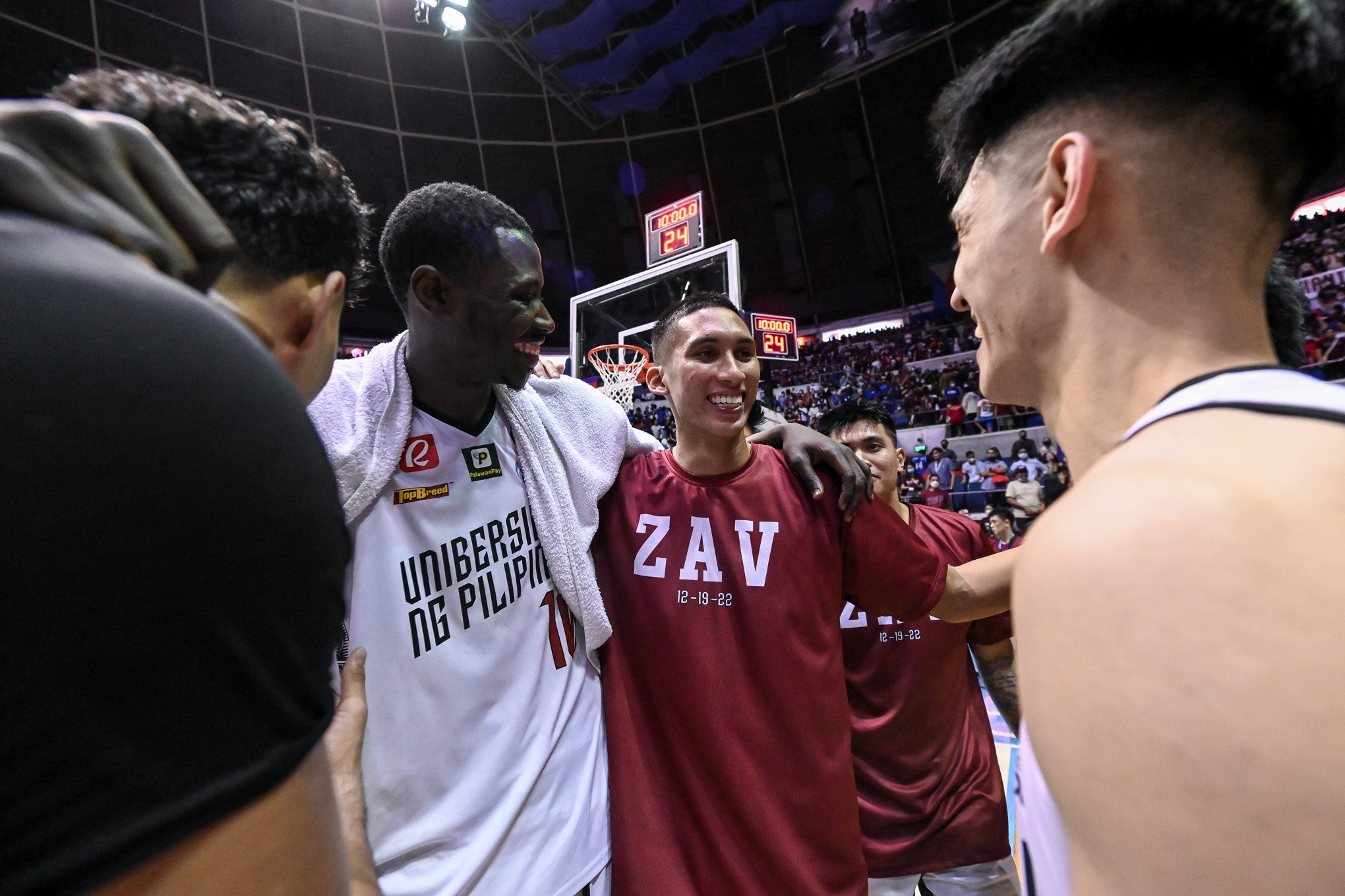 GIVING HIS ALL. Zavier Lucero shares some laughs with his UP teammates after the Fighting Maroons were dethroned by the Ateneo Blue Eagles in the UAAP Season 85 men's basketball finals

MANILA, Philippines – UP star Zavier Lucero did not have the storybook ending he wanted to in his short UAAP career after he tore his left ACL in Game 2 of the three-game Season 85 finals, where Ateneo eventually prevailed to reclaim the men’s basketball title.

He did not, however, have a shortage of support and adoration on his way out in Game 3 last Monday, December 19, as the entire Fighting Maroons team rallied around him, while thousands of fans took every opportunity to shower him with thankful cheers and applause even in the face of a looming loss.

For his part, Lucero did everything he can to fire up his brothers himself, as he arrived at the sold-out Araneta Coliseum in full playing gear, and even joined warmups like nothing was amiss in his knee.

Although it pained him to watch helplessly as the Blue Eagles methodically dissected the Maroons before holding off yet another cramming comeback effort, Lucero said farewell to his home with a full heart, nonetheless.

“Obviously, my thoughts are [we] came up short of our goal, but it’ll be one that I remember for the rest of my life,” he said after Ateneo turned back UP, 75-68, to win its fourth championship in five years.

“I made great relationships with the guys here, no matter if we won the championship or not, that’s what I’m gonna hold most dear to my heart, the relationships I’ve made, and obviously, the UP community and all the love I’ve felt out here.

“It’s not as successful as we wanted, but definitely still a success.”

In a bizarre moment turned magical for UP, Ateneo coaches, players, and staff collectively got a technical foul for storming the court to celebrate too early when there was still 0.7 seconds left on the game clock, which opened the door for Lucero to shoot one final free throw to end his collegiate career.

The free throw was not a championship-winning moment nor was it anything game-changing, but Lucero nonetheless cherished every second of it as he walked off the UAAP court for good.

“I was just happy to be able to step on the court one more time. I didn’t like the way that I thought I was gonna leave things so, the plan was whether we were gonna win or gonna lose, I did wanna check in for one last time and just to hear the support from the crowd and the UP community,” he said.

“It warmed my heart for sure. That’s something I’m gonna remember for the rest of my life too. I’m just glad I made it.”

Lucero did not have the most eye-popping numbers for a loaded UP team, but he was an all-important glue guy who was crucial in securing that Season 84 championship – the Maroons’ first since 1986.

There will always be time to dwell on what-ifs had he not injured his knee at a most critical juncture, but what will always be a sure thing was Lucero gave his all in such a short-lived, yet decorated UAAP career, and that is something no one can ever take away from him. – Rappler.com