Cool Smashers fend off Angels, gain share of lead; F2 back in hunt 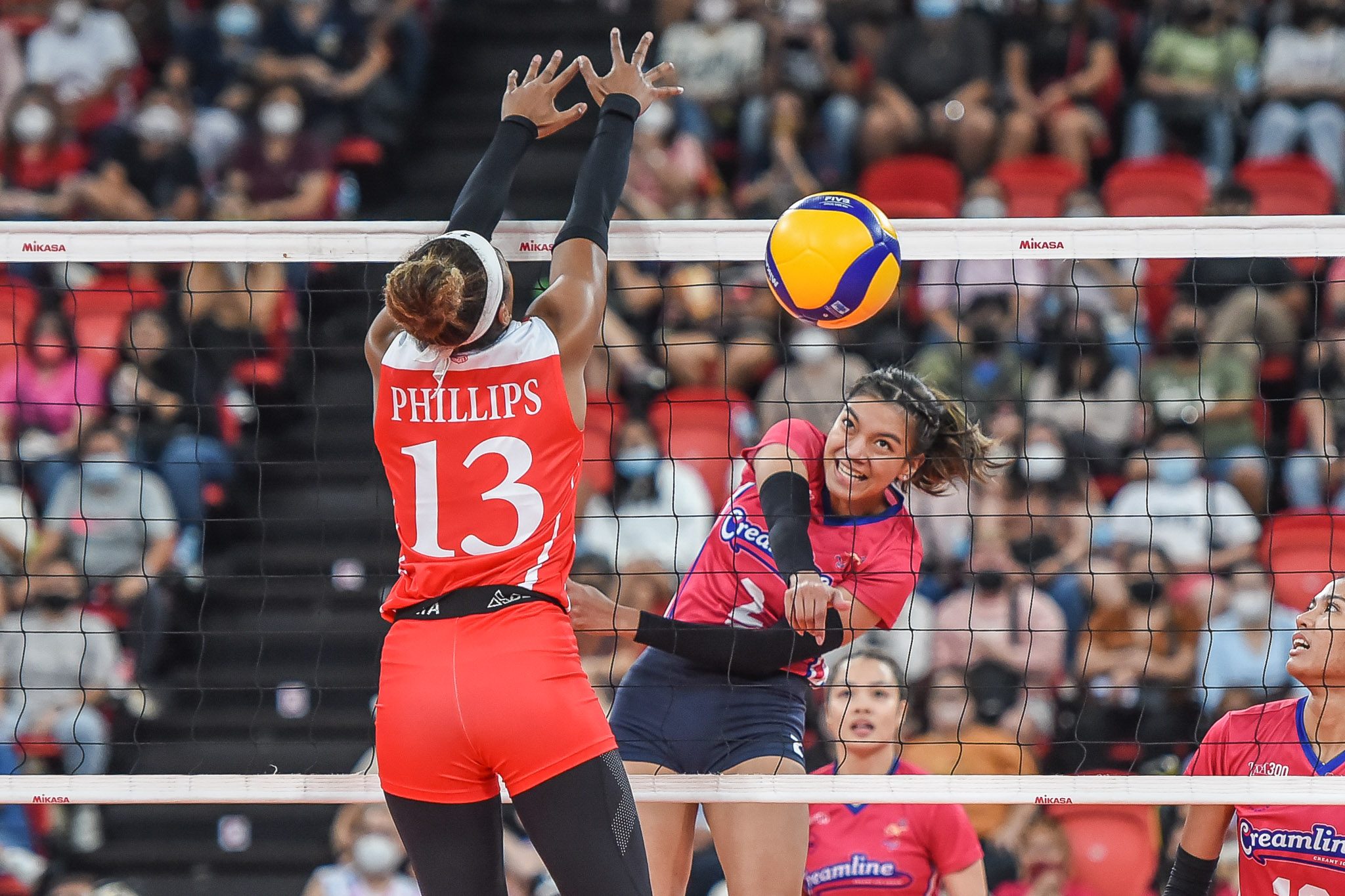 MANILA, Philippines – Creamline grabbed a share of the lead while F2 Logistics finally delivered with a full, healthy roster in separate wins in the Premier Volleyball League Reinforced Conference on Tuesday, October 18, at the PhilSports Arena in Pasig.

Alyssa Valdez took charge in the clutch, firing back-to-back off-the-block hits as Creamline survived a searing Petro Gazz fightback in the fourth to fashion out a 25-19, 16-25, 25-18, 27-25 victory.

With the win, the Cool Smashers joined idle Chery Tiggo at 2-0 for the early lead.

Valdez unloaded 14 points and Jema Galanza added 13 hits, even with Tots Carlos still feeling her way back into the groove following a back issue.

The Cool Smashers seized control majority of the fourth but wavered, enabling the Angels to strike back and grab the lead at 24-23 and 25-24.

But the 2019 champions failed to come up with the needed finishing kick, blowing 2 set points and a chance to drag the Cool Smashers to a deciding set.

After a Petro Gazz service miscue that tied it at 25, the Cool Smashers came through with a couple of fine defensive gems off the Angels’ attacks, setting Valdez for blasts on both occasions, the clincher actually proved unnecessary as the Angels also committed a net violation in their futile attempt to stop the many-time league MVP’s assault.

MJ Phillips backed up Vander Weide with 16 points but Myla Pablo and Jonah Sabete – who fired 14 hits in helping power the Angels past the Choco Mucho Flying Titans last week – settled for just 7 and 6 points, respectively.

The Angels fell to 1-1 for joint third with the Cignal HD Spikers, the PLDT High Speed Hitters, the Akari Chargers, and the Choco Mucho Flying Titans.

Earlier, F2 Logistics banked on superb hitting and passing to trounce an erratic UAI-Army side, 25-17, 25-21, 25-16, and break through after back-to-back setbacks.

The Cargo Movers likewise slowed down their rivals’ attacks with great blocking, producing 8 points upfront, while pouncing on the Lady Troopers’ miscues to complete the straight-set romp that put one of the league’s crowd drawers back in contention after a struggle due to a depleted lineup and health issues.

Kalei Mau cramped out late in the second frame but not after scoring 8 points and helping F2 crawl from three-point deficits to surge at 18-15 on their way to the four-point win.

“We were really hungry for a win. We knew it’s going to be a tough match but our preparations against Army were clearly specified,” said Stalzer.

“Were still kind of fresh (playing together). But we’re working on our chemistry and we’re doing well from here,” added the American opposite hitter, who didn’t see action in the team’s three-set loss to Chery Tiggo, then fired 26 points in a close four-set defeat to Choco Mucho, both last week.

The same, however, could not be said of the Lady Troopers, who absorbed their third straight defeat.

F2 Logistics overwhelmed Army in attacks, coming through with 51 points against the latter’s 25. The Cargo Movers also made 2 aces and scored 24 points off their rivals’ miscues while yielding 10 unforced errors of their own.

Army coach Kungfu Reyes ran out of options trying to motivate his wards, who after dropping the first two sets, trailed, 6-13, in the third and never recovered with mishits and miscues while the Cargo Movers sustained their assault on kills, running attacks and 1-2 plays.

The Lady Troopers did strike back at 16-21 but the Cargo Movers took the next 4 points, including a fiery backrow attack from Stalzer and an Army error, with former Ateneo stalwart Dzi Gervacio wrapping up the one-hour, 25-minute win with back-to-back hits.

Import Laura Condotta typified the Lady Troopers’ offensive struggle with a measly 5-point showing with Jovelyn Gonzaga topscoring for the team with 7 points.