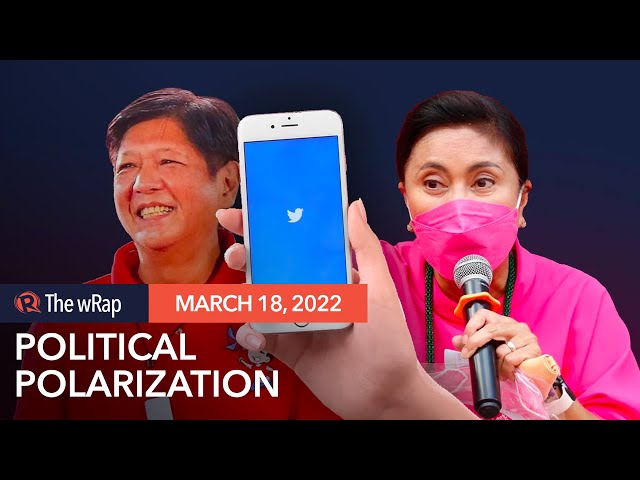 These were findings shared by data scientist Gilbert Chua during a research briefing on Friday, March 18. This study of #FactsFirstPH analyzed the behavior of almost 130,000 Twitter users engaged in election-related conversations to see how Twitter users interact with hashtags around Philippine election-related topics and also to uncover levels of political polarization.

Titled “The Philippine cyber-political divide: Political polarization on Twitter amid 2022 Philippine presidential elections,” the study analyzed Twitter data containing nearly 450,000 tweets with topics – in the form of phrases and hashtags, that trended in a 5-month period from October 1, 2021, to March 12, 2022.

In the briefing, Chua pointed out the following findings of the study:

The study manually picked 128 Philippine election-related topics from the 10 highest rating trending topics and hashtags in the Philippines as deemed by Twitter for every hour of the same period. The topics were then identified, assigned to their corresponding candidates, and then assigned a polarity (either positive or negative), depending on whether the hashtag promotes the candidate or attacks him or her.

On the other hand, Robredo started a chain of campaign rallies that drew thousands in March, like her campaign rally held in Cavite on March 4. During this time, the study also saw a spike in tweets coming from Twitter accounts supporting Marcos that mentioned Robredo, highlighting it as one of the limitations of the tagging methodology. The study said that it is likely that the Twitter users supporting Marcos and which produced tweets mentioning Robredo were truly negative instead of being neutral or positive.

To further polarization, the study also analyzed the retweets within a network of Twitter users from both parties. To be considered part of a network, a Twitter account must either be quoted or have been quoted by another account whose tweet became part of the top 10 trending topics.

Majority of public Twitter accounts that quoted users and tweeted about election-related topics tweeted about Robredo more than any other candidate. This behavior, according to the study, suggests a strong tendency to build on one another’s tweets on an exclusive basis, mirroring an “echo-chamber.”

The study is a part of the work being done by #FactsFirstPH to better understand the flow of disinformation in social media during the election period. #FactsFirstPH is a multisectoral coalition of more than 120 groups that seek to combat disinformation ahead of the 2022 national and local elections. – Rappler.com