Facebook Twitter Copy URL
Copied
'Why is it that the only time trans people make it to the news is if we’re high-profile victims of grisly crimes, or if our rights are topics of debate?'

I remember the mixed reactions I got from college friends when I casually told them I would love to be in their shoes, busy starting on their thesis work.

Research and its fruits, in my mind, were more than a contribution to my field of study; they were an actionable, practical, ultimately helpful thing. I wanted so badly to help, to be of use to someone, anyone — not to make something of myself, but to create something with purpose. While my friends dreaded the entire thesis process, from planning to submission, I ached to be doing what they were doing.

When I finally arrived at this stage myself, it was years later, in January of 2020. Full of idealism and vigor, I expected my graduating year to be a fulfilling, well-earned conclusion. But after finally gaining much needed clarity and confidence in my chosen research topic, I found myself on lockdown. I realized that my envy was not only misplaced, but that it may also have been entirely unwarranted.

I learned the hard way that the research process was difficult for first-time researchers, and even more difficult to attempt alone and in quarantine. Purpose was hard to find, and the will to create something that would have purpose, even more so. How could I manifest what I didn’t feel?

In retrospect, there was a range of topics that I could have chosen instead. Not sticking to my guns could have saved me significant emotional turmoil, but in no way would I have learned as much had I gone for a topic less personal to me. As a culmination of my over-extended, six-year-long state university education, I wanted to use what resources, time, and knowledge I had to create a record of the stories of my fellow LGBTQ+ Filipinos, which are usually treated at best as a blip on the radar, and at worst, as tabloid exaggeration.

[OPINION] LGBTQ+ people left behind after the storm 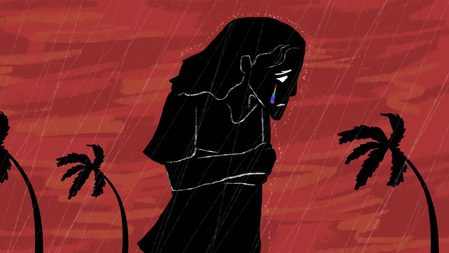 As one does in lockdown, I wavered from hyper-productive highs to self-doubting lows, where barely a hundred words would make it to the page after hours in front of a screen. To even get my topic approved, I also had to construct an entire database. Being trans and having an idea of how LGBTQ+ stories were treated, I had my doubts. Would I even be able to find the documentation to make this research possible?

Fortunately, I did. But the shock, then disbelief, then pain that I felt finding out that these stories existed, and that they numbered in the hundreds, was jarring. According to my research, 109 LGBTQ+ individuals had been reported killed from August 2001 to September 2020, according to 139 online news reports published in that period.

After a long month of recording 138 of these reports, I had turned in for the night with a hollow sense of victory. Then, the next morning, on September 2, I woke to the news that Pemberton had been granted early release. It never occurred to me that while I pored over stories of pain, violence, and death among fellow LGBTQ+ people that were fixed firmly in the past, something so devastating could also happen in the present.

Days later, Pemberton was granted an absolute pardon by the president. This was justified by presidential spokesperson Harry Roque, former legal counsel of the Laude family, as a move to preserve US-Philippine relations  in the hopes of securing COVID-19 vaccines in the future.

My first rally will always be a pivotal moment in my life. It was an on-campus indignation rally demanding justice for Jennifer Laude, in commemoration of her first death anniversary. I think back to that moment in 2015 and know that I wouldn’t be the person I am now had I not been there that night, calling for an end to the joint US-Philippine government deal that enabled Jennifer Laude’s death and privileged her murderer, a US Marine on foreign soil, over the rights of a Filipino citizen.

Six years since her murder, aside from still being denied justice, she is now being used politically.

On the 29th, days after Pemberton’s pardoning, news also broke that Donna Nierra’s body had been discovered in a creek in Caloocan. As heart-wrenching as the initial data gathering had been, I never imagined that I would have to add a 109th name to that far-too-long list of names.

This was a sadly familiar grief, a grief that unfolded and grew alongside the  mourning of the community. It was a grief echoed through time, from Omeng Geronimo in 2001; to Jennifer Laude in 2014; to Donna Nierra in 2020; to RR, Erika, and Nicole, whose bodies were discovered in January; to Ebeng Mayor and Junjie Bangkiao, victims of hate crimes days after this year’s International Day Against Homophobia, Biphobia, Intersexism, and  Transphobia (IDAHOBIT) on May 17.

Why is it that the only time trans people make it to the news is if we’re high-profile victims of grisly crimes, or if our rights are topics of debate? Are death, violence, controversy, or struggle the only stories of trans life worth telling? At the same time, while telling stories of trans life beyond our suffering is important, we also cannot settle for visibility over justice. We need to realize that so much injustice goes unnoticed and we must act to prevent such injustice from happening again.

LGBTQ+ organization Bahaghari opens their discussions of the LGBTQ+ situation in the Philippines by pointing out that there is a vacuum of research and data on the LGBTQ+ population. The lack of data and  actionable findings results in poor outcomes for the LGBTQ+ community in many ways. An obvious example from legislation would be the SOGIE Equality Bill. Because policymakers have no idea of the lived experience of the average LGBTQ+ person, the LGBTQ+ community has to struggle to make itself heard. We cannot wait until another trans person is murdered before the state begins to view us as human beings with rights, worthy of recognition. Research should have a purpose beyond filling pay-walled scientific journals, lining the pockets of research institutes, and spending government budgets.

Yes, I am just one long-overdue graduate who barely scraped by with their research. But the 139 LGBTQ+ individuals whose stories are re-told each time we mourn? They are far too many. More than enough lives have been lost to justify the need to recognize and protect LGBTQ+ individuals. – Rappler.com

Andie S. Canivel is a Development Communication fresh grad and passionate defender of trans rights. They enjoy befriending cats and dressing in all-black.