Facebook Twitter Copy URL
Copied
As the Philippines and China sparred over Mischief Reef, President Jiang Zemin charmed Philippine officials with his rendition of Western classics during his state visit after the 1996 APEC summit in Subic
It was one of the most anticipated arrivals at the recently concluded APEC summit in Manila. For the first time in 10 years, a Chinese president was stepping on Philippine soil. While waiting for Chinese President Xi Jinping to appear on the live feed at the APEC media center on November 17, I remembered another Chinese leader who I saw up close, just after the first Philippine hosting of APEC in 1996. Chinese President Jiang Zemin went on a state visit to the Philippines in November 1996 amid strained bilateral ties caused by the two countries’ respective claims and actions in the South China Sea.

The year before the Philippines assumed its first APEC chairmanship, the government organized a media sortie to Mischief Reef (Panganiban Reef) in the disputed Spratlys. A group of 38 local and foreign journalists rode the World War II vintage BRP Benguet, accompanied by then Major General Carlos Tañega, chief of the Western Command.

The trip was prompted by the discovery of Chinese structures on Mischief Reef, which is 135 miles southwest of Palawan, well within the Philippines’ 200-mile exclusive economic zone. Faced with protests from the Philippines, China insisted these were just storm “shelters” for its fishermen.

Beijing went through diplomatic channels to stop the media trip but Manila was resolute; it wanted to show the world what Beijing was doing, using press freedom as its alibi.

In that May 1995 trip, journalists witnessed how Chinese vessels cut into the path of their Mischief Reef-bound ship. After a 70-minute standoff, the Philippine ship retreated. Meanwhile, a pooled media chopper emanating from the vintage naval ship flew over Mischief Reef and saw China’s claimed “fishermen’s shelters” – clusters of octagonal steel structures, with Chinese flags, fitted with equipment typical of military installations. While the group didn’t reach its destination, the mission achieved its goal. It internationalized the issue, which China frowned upon.

The Mischief Reef issue continued to be an irritant in bilateral relations between the Philippines and China when Jiang arrived in the Philippines for the APEC summit in Subic, followed by his state visit. During their bilateral meeting in Malacañang, President Fidel Ramos welcomed China’s ratification of the United Nations Convention on the Law of the Sea (UNCLOS) a few months before – apparently in the hope that this would would keep its actions in check in the South China Sea. Jiang told Ramos that China attached great importance to its relations with the Philippines, and looked forward to stepping up this relationship based on “mutual trust” and “oriented towards the 21st century.” Both presidents agreed to “find ways to make it happen.” Mischief Reef was “touched upon” by the two leaders, but Foreign Undersecretary Rodolfo Severino, who briefed the media, did not give details. He said both leaders would have another opportunity to discuss bilateral matters on their scheduled cruise around Manila Bay the following day. It seemed like a routine coverage until we learned about the remarkable event that unfolded at the dinner reception for Jiang. When the string quartet began to play One Day When We Were Young, Jiang suddenly stood up, got the mic, and sang the US standard by heart, like a pro. He sang a few more songs, including Swanee River, a Hawaiian wedding song, and an excerpt from a Chinese opera. The guests, who were expecting just another night of celebratory toasts and cultural performances, loved it. Where else could they see the leader of a communist country belting out Western classics? “Tumugtog lang ‘yung string band ko, kumanta na [siya] (When my band started playing, he began to sing),” the late General Jose Calimlim, Presidential Security Group (PSG) chief, told us then. “It was the first time in history na may state guest na kumanta (that a state guest sang),” another surprised official said. “He (Jiang) likes Broadway songs.”

Sailing together to the 21st century: Love me tender

Jiang continued to show his charming, fun-loving side at the Manila Bay cruise hosted by Ramos, which a small media pool, including myself, covered. Malacañang called the program, “Sailing together to the 21st Century.” Jiang and his official delegation arrived at the BRP Ang Pangulo in coats; some wore ties. Ramos wore his trademark yellow and blue Philippines 2000 vest over a shirt with folded sleeves, and a white cap. Ramos handed out the same vests and caps to the Chinese officials who included Trade Minister Wu Yi, Foreign Minister Qian Qichen, and Tang Jiaxuan, Vice Minister of Foreign Affairs. They obliged and shed their jackets to wear the vests. Ramos autographed the cap and vest of Jiang, and asked his guest to do the same on his set. “You look like a sailor now,” a smiling Ramos told Jiang, as he gingerly adjusted the Chinese leader’s cap. Jiang ate papayas, mangoes, congee, a cold plate, and drank tea from a personal flask carried by an aide. As the band played I Got You Under My Skin – the first of 21 songs chosen by Ramos himself – the Philippine leader showed the bay area to Jiang and the other guests. Motioning to the horizon, Ramos said, “Over there is the Philippines and China, into the 21st century, through cooperation in education and IT.” He had asked for expanded cooperation with China on these two areas when he met with Jiang the day before. At Ramos’ prodding, the two leaders stood up and joined the band. They sang Elvis Presley’s Love Me Tender. After the well-applauded performance, Ramos told Jiang: “That’s the favorite song of Bill Clinton. So you have to prepare when he visits you. You will surprise him.” They sang another duet, Let Me Call You Sweetheart. Ramos was with First Lady Ming Ramos, but he clearly only had eyes for his state guest that day, we, reporters, joked at our table. Ramos then invited Jiang to dance the waltz. The Philippine president danced with the Chinese leader’s interpreter; Jiang, with Mrs. Ramos. Ramos also danced with the Chinese trade minister and gave her a twirl; the Chinese Foreign Minister partnered with Tourism Secretary Mina Gabor. Then the two leaders sang Top of the World, which Ramos knew better than Jiang. The Chinese leader reprised his previous evening’s performance of Swanee River, again showing off his powerful singing voice. Jiang asked his trade minister to sing a Chinese duet with him – Kang Ding Love Song – but Wu declined, saying the notes were too high for her. Ramos and Jiang seemed like old friends – one official described them as “very chummy” – not the leaders of nations mired in territorial disputes. Jiang even affectionately touched Ramos’ arm in front of the other guests, after his first song. When somebody announced that the yacht would dock in 10 minutes, Ramos taught his guest something the Philippine leader excelled in: the cha-cha. As the yacht began to berth, Ramos showed Jiang some cha-cha moves. The student easily got the hang of it, and did his own variety of the dance. A member of the Chinese delegation remarked that it was the Chinese leader’s first time to try it, as he only danced the waltz. As the chain of the yacht was hauled closer to shore, the band played its final number, Auld Lang Syne. The Philippine and Chinese officials, as directed by Ramos, held hands together in a half-circle while singing in unison. Some Philippine officials who joined the tour couldn’t help but like the Chinese president. “He’s so taong-tao (real),” Apolinario “Jun” Lozada Jr., presidential adviser on foreign affairs, told us before we disembarked from the yacht.

Even with such memories of that Philippines-China “friendship cruise,” it’s easy to understand why President Benigno Aquino III and Xi had no scheduled bilateral meeting on the sidelines of the APEC summit in Manila. Between the first and second APEC chairmanship of the Philippines, the two countries had dropped diplomatic niceties in reference to each other’s claims and actions in the South China Sea. Aquino had likened China’s expansion in disputed territory to that of Nazi Germany, while China had repeatedly played the reprisal card and warned the Philippines to  prepare for the consequences of standing up to the economic giant. Under the watchful eye of other claimant countries and the international community, and despite repeated protests, China executed massive reclamation activities in the disputed area, built airstrips on some artificial islands it had created, and even announced a plan to set up an air defense zone over disputed waters. 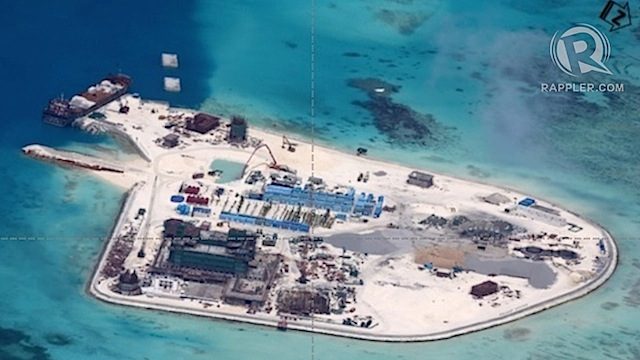 In 2014, the Philippines submitted a memorial, a 4,000-page document, to a UN-backed arbitral tribunal in The Hague, to start proceedings that China has refused to recognize. It won the first round last month after the tribunal unanimously decided that it has the right to hear the Philippines’ case against China. The US, the Philippines’ staunchest supporter in the fight, has not only issued increasingly bolder statements of support for the Philippines, but has matched them with action as well. Weeks before the APEC summit in Manila, a US naval ship sailed by an artificial island being built by China in the South China Sea, said to be the first of a regular run.

It was against this backdrop that the Chinese president was visiting the Philippines, where many Filipinos regarded his country as a bully.

The live feed at the APEC media center finally revealed the Air China plane bearing Xi at the Ninoy Aquino International Airport.  (WATCH: APEC 2015: Arrival of Xi Jinping, China President) Minutes later, a smiling Xi appeared at the doorway of the plane, and briefly raised his hand in greeting before descending the aircraft. Finance Secretary Cesar Purisima was designated to welcome him at the airport, a choice that mirrored the economic dimension of Philippines-China relations that Manila wanted to highlight.

Xi, who had no interpreter by his side, smiled and nodded politely at the chatty Purisima. Like most other newly-arrived guests, a garland of the Philippine national flower, the sampaguita, was hung around his neck. It was the symbol of the Philippines’ warm welcome and hospitality.

Purisima, the Philippine president’s alter-ego for that occasion, escorted Xi to his car to see him off. Before he got into his vehicle, the Chinese leader had a final task to perform. He took off the sampaguita lei, which dangled around his neck for about a minute, and handed it to an aide. – Rappler.com