[ANALYSIS] Military, police pensions in Bayanihan 3? But why? 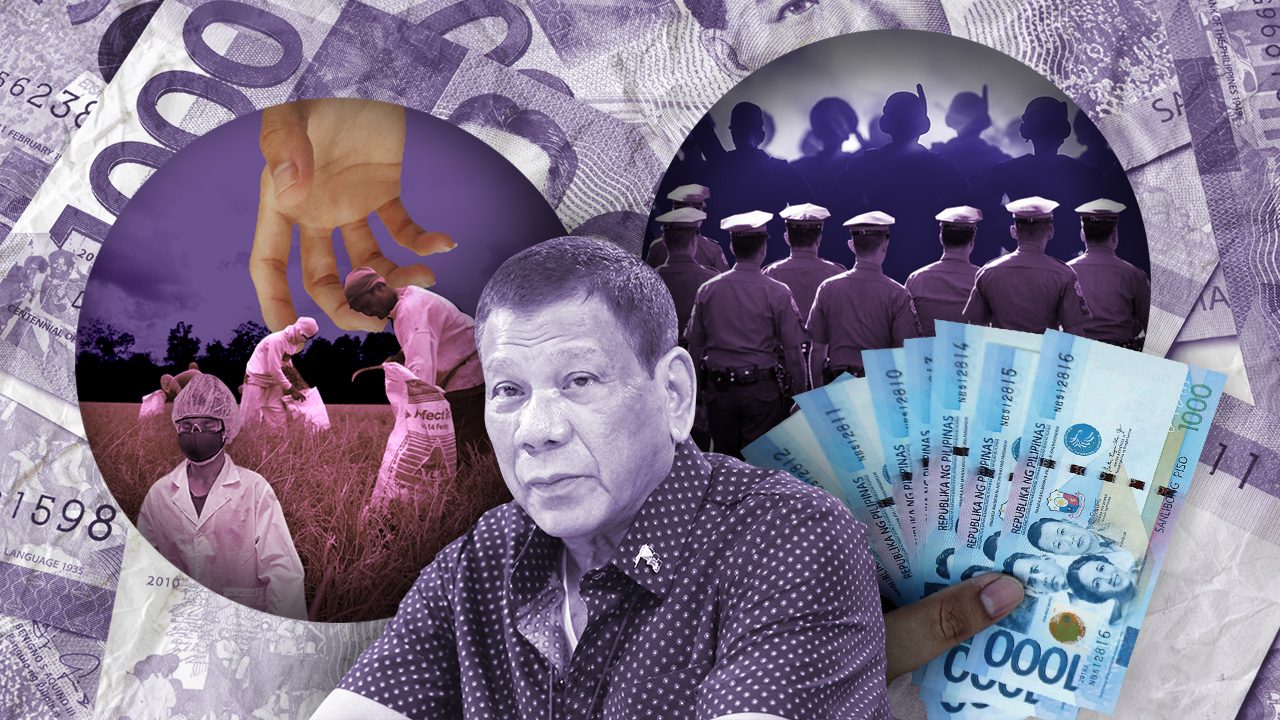 Facebook Twitter Copy URL
Copied
Just a year left in office, Duterte still hasn’t done anything substantial to resolve this burgeoning fiscal crisis, which will doubtless haunt the next president

In May I wrote that, amid the record rise of hunger, President Rodrigo Duterte and his economic managers implemented policies that served the rich more than the poor. (READ: Amid record hunger, Duterte aids the rich)

But it seems there’s another interest group getting more help than they need: the military and police.

We know this because of the most recent incarnation of Bayanihan 3. It is an economic relief package that, when first proposed in November 2020, amounted to P420 billion. On the face of it, it actually looked good. (READ: Why Congress needs to pass Bayanihan 3 now)

On June 1, after half a year in the pipeline, the House of Representatives finally approved Bayanihan 3 on final reading.

But as it went through the legislative mill, not only was Bayanihan 3 reduced to P405.6 billion – suffering a P14.4 billion or 3.4% cut – but lawmakers also managed to insert in it a whopping P54.6 billion for the pensions of retired military, police, and uniformed personnel.

This unconscionably eats away at economic aid for the poor and other embattled sectors of our economy. How did this happen?

The original Bayanihan 3 had every reason to breeze through Congress.

After all, the Philippine economy is in tatters, both hunger and unemployment have reached record highs, and millions of Filipinos urgently, desperately need, economic aid. The bill is also backed by no less than House Speaker Lord Allan Velasco.

Bafflingly, however, Bayanihan 3’s progress has been painfully slow.

Fast forward to May 2021, we learned that a substitute bill overhauled Bayanihan 3 and split it into 3 phases – lawmakers being unsure whether government can fund the entire thing all at once.

At the same time, they inserted lots of other things.

Besides doubling the cash transfers for all Filipinos (so that each person could, in principle, receive P2,000), lawmakers inserted P54.6 billion for the “pension and gratuity fund” for the military, police, and other uniformed personnel, P30 billion for quarantine-affected households, P9 billion for medical assistance to the poor, P6 billion for national nutrition, P3 billion for LGU support, P2 billion for aid to cooperatives, and P.5 billion for the COVID-19 tests of seafarers and OFWs.

The original Bayanihan 3 was much more balanced: Apart from cash transfers for the poor, it poured money on sectors of our economy that need help the most, especially small businesses, farmers, and fisherfolk.

But lawmakers disrupted that balance and mangled Bayanihan 3 almost beyond recognition. It’s a rather different animal now.

Most glaring of all is the P54.6 billion pension fund for the military and police.

In May, Representative Stella Quimbo, the original proponent of Bayanihan 3, revealed that it was the Department of Budget and Management (DBM) that requested the pension allocation, which was previously cut by P20 billion in the 2021 budget – ostensibly to accommodate the pandemic response.

The thing is, Congress is obligated to set aside ever increasing amounts for military and police pensions. In fact, as pensioners grow in number, this promises to be a full-blown fiscal crisis soon: If government does nothing, government must pay a mind-boggling P848 billion in pensions each year in the next 20 years. (READ: Will Duterte avert ‘fiscal disaster’ in military pension?)

This impending fiscal crisis will doubtless hemorrhage our public coffers and crowd out funding for education, health, infrastructure, or whatnot. For scale, the annual payout of P848 billion is nearly 13% larger than the entire education budget for 2021 and four times the entire health budget.

The problem stems from several factors.

First, unlike most people in government, military and police don’t actually pay for their own pensions through their contributions to the GSIS. Rather, their pensions are budgeted directly in the General Appropriations Act and directly paid for by taxpayers.

Second, military and police pensions are indexed or tied with the base pay of active personnel, based on a 1979 Marcosian decree.

Third, in 2018, Duterte doubled the base pay of military and police in fulfillment of his campaign promise two years prior. This proved to be a windfall especially for low-ranking personnel. But because of indexation, this higher base pay spells larger pension payments in the future.

True enough, pension payments immediately ballooned by P32.4 billion in 2018, as shown in Figure 2. Lawmakers and Duterte’s economic managers – worried by the fiscal impacts – staved off this pension increase by suspending indexation in 2018.

But that suspension ended in 2019, and now government still owes retired military and police personnel tens of billions of pesos in “pension differential.” (As of February 2021, only P2.85 billion of this differential has been paid out.)

Several possible solutions have been put forward, like increasing the retirement age of military and police, stopping indexation altogether, and forcing personnel to pay for their own pensions like most people do anyway. While those in the military and police are amenable to the first, they’re fiercely resisting the second and third.

Just a year left in office, Duterte still hasn’t done anything substantial to resolve this burgeoning fiscal crisis, which will doubtless haunt the next president. Nor does he seem inclined to fix it – obviously this populist policy is serving some political purpose.

At any rate, this fiscal dilemma allows us to understand why military and police pensions managed to find their way into Bayanihan 3.

Politically, it’s a compromise. Representative Quimbo settled by saying it’s a “morale booster”: “If you’re a soldier and as a frontliner, you know that the government takes care of you even after retirement, that is a big morale booster. I think it is still related to COVID response in that way.”

In the actual bill, the pension allocation was meant to “help [retired military and uniformed personnel] bridge their financial needs and to cope with the challenges brought about by the pandemic.”

Taking their own sweet time

Notwithstanding its imperfections, Bayanihan 3 is still necessary to mitigate the worst effects of the recession and shore up our economy.

The problem is that both houses of Congress have already adjourned their sessions and won’t meet again until Duterte’s final State of the Nation Address in mid-July.

With vaccination proceeding at a snail’s pace and monetary policy failing to immediately boost the economy, it’s up to Duterte and lawmakers to ramp up and speed up the government’s fiscal response.

But they’re failing miserably at it. They’re taking their own sweet time like a lifeguard who dilly-dallies at the beach while someone is obviously drowning in open water.

One can only hope this abysmal lack of urgency becomes a key issue in the 2022 campaigns. But will anyone remember by then? – Rappler.com