Facebook Twitter Copy URL
Copied
'The reality is, this kind of history – the one that shows how much we were and are continually part of Asia, and how Mindanao was and is always central to the narrative – will never be written'

This week, the Republic celebrates the 500th anniversary of the Portuguese Fernão de Magalhães’ scurvy-stricken ships landing in Cebu. After agreeing to the terms laid out by Humabon, the local Rajah, Magalhães thought he now had enough manpower to attack the nearby (Datu?) Lapu-Lapu. The latter, of course, easily cut him and his forces down, and Philippine history goes on to celebrates this as the first anti-colonial revolt, even when the idea of “Filipino” was not even in the minds of Spaniards.

This is, of course, nothing but hogwash that reinforces a colonial scholarship (by colonial here, I mean not just the Kanos and the Kastilaloys, but also the one that comes out of Manileños’ minds). True, Magalhães and his comrades were trying to find a way to the fabled spice islands, but to portray this as something historic belies that Humabon and others did not give a hoot to these new arrivals. This bunch of ignoramuses had nothing to offer the Rajah, who had already been actively involved in an international trading network driven by the Chinese dynasties’ needs.

Much like the Portuguese, the Spaniards were nothing but minor players, nay interlopers, in this vibrant cosmopolitan network. Everyone in the area “knew” they were there. Still, everyone also “knew” that all they offered was barya-barya (which continued even well into the Galleon Trade era, where China benefitted more than Mexico).

To ascribe Magalhães and his motley crew some political and cultural heft betrays an extreme ignorance of how local and global histories played out in the mid-1500s. “Cebuano history” was not local; it was an organic part of a larger Asia-Pacific story. Humabon’s and Lapu-Lapu’s domains were but two of many links that contributed. They benefitted from the China trade, yet also remained very much what the late historian of pre-colonial Southeast Asia O.W. Wolters called “centers in their own right.”

And there is more. The sultans and datus of the central part of the archipelago were already aware and receptive of another earlier global flow – the Arab missionaries from what is now the Middle East.

Simultaneously, as Magalhães was limping his way into Sugbu, Sharif Muhammad Kabungsuwan arrived in Cotabato. He united the constantly warring Maguindanao and Buayan ruling families by converting them to Islam. Seventy-eight years later, the Spanish would feel the power of this unity when the areas they controlled felt the brunt of a Maguindanao force of 50 vessels and 3,000 fighters raiding central Philippines.

Kabungsuwan was, of course, not the first outsider to come to the southern island. Seventy years or so later, Sayyid Abu Bakr established the Sulu sultanate. By the late 12th century, it was not unusual to see Arab missionaries proselytizing around the archipelago, alongside Chinese traders buying pearls and trepang while offering ceramics to their local partners.

Many of our historians know these facts, but they could not – of course – get themselves to admit that when it comes to “discoveries,” the Arab Muslims were way ahead of the game. Writing a history of the Philippines beginning with Sayyid Abu Bakr and Sharif Kabungsuwan is to completely upend the narrative many of us have grown used to – that the country’s birth began in Cebu and was enriched by Manila-centrism. Marginal areas like Mindanao and communities like the Maguindanaos (and even Lapu-Lapu!) cannot but be bit players in the tale.

For if we are to “start” Philippine history with Abu Bakr, then it would make everything north of the archipelago the periphery. The Spanish would be nothing but another fiefdom, and Manila just one of those many “small towns” out in the boonies. This was indeed the case up to the mid-1800s, when Muslim sultanates kept the Spanish on the defensive, and the latter admitted the limits of their power. How else to explain the Spanish reference of what we now call “the Bohol Sea” as La Mer de Moro? 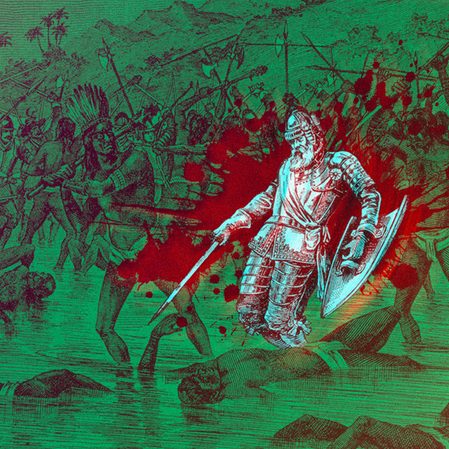 To write Philippine history standing at the port of Jolo would also compel our historians to admit how equally powerful an ideology Islam was, and how, despite the subsequent marginalization of the Moros by the Americans, its influence had never waned. And horror of all horrors, the Moro is suddenly at par if not even culturally superior to the non-Moros!

The reality is, this kind of history – the one that shows how much we were and are continually part of Asia, and how Mindanao was and is always central to the narrative – will never be written. To do this would not only be too tedious (What, the more important primary documents were those written in Putonghua and Arabic!!?? And we have to learn Maguindanao, Tausug, Maranao, and Visayan instead of “Filipino”???), it would also be extremely painful to the national psyche.

And so the best that our historians can do is to say, “Hey, we have a nationalist history, dammit!” and argue that its genesis began in Mactan when Lapu-Lapu (morphed into the first Filipino) butchered the mercenary Magalhães into pieces.

And you still wonder why many Muslims still don’t think they’re welcome to the Filipino nation? – Rappler.com

Patricio N. Abinales is Bisaya and from northern Mindanao.