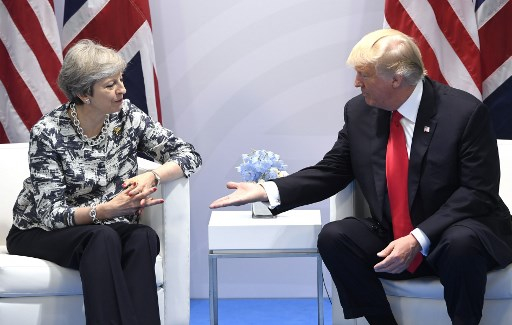 HAMBURG, Germany – US President Donald Trump said Saturday, July 8, that his controversial state visit to Britain will go ahead, adding that he was hoping for a “very powerful” trade deal with London “very, very quickly”.

At a meeting with British Prime Minister Theresa May at the G20 summit in Germany, Trump said they would have “tremendous talks” and reach “a very powerful deal” on trade “very, very quickly.”

Any negotiations for such an accord would further drive a wedge between Britain and the European Union which has warned London against striking any separate agreement before its divorce from the bloc was complete.

Back home, May has been derided for seeking to curry favour with Trump and has come under fire for inviting him for a state visit.

But questions about the trip arose after it got no mention in Queen Elizabeth II’s annual speech to parliament in June, when it is customary for the monarch to list upcoming state visits.

Asked if the state visit would still go ahead, Trump indicated that they would be working on a date.

“I will be going to London,” he added. – Rappler.com