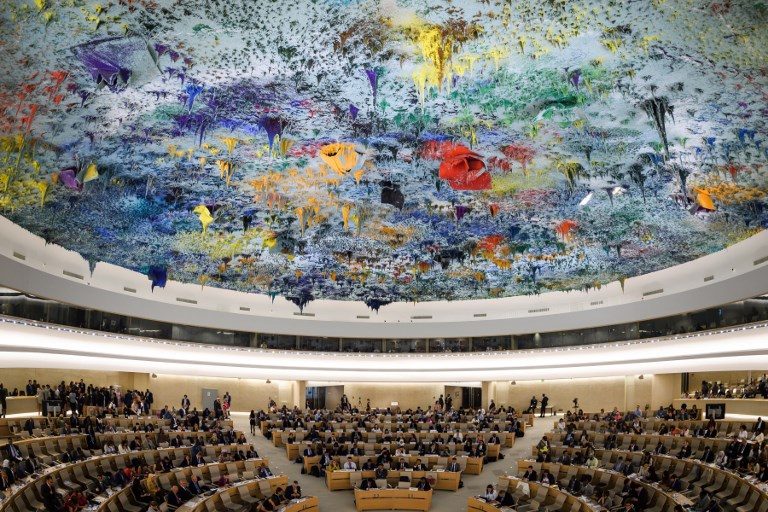 Facebook Twitter Copy URL
Copied
(UPDATED) To applause in the chamber, Venezuela gets the nod in a vote by the UN General Assembly to choose 14 new members for the 47-member body based in Geneva

To applause in the chamber, Venezuela got the nod in a vote by the UN General Assembly to choose 14 new members for the 47-member body based in Geneva.

The council works to promote and protect human rights around the world. Its members are elected for staggered three-year terms on a regional group basis.

Two of 8 seats allotted for Latin America were up for grabs Thursday and Brazil took one after winning the most votes.

Earlier this month, Costa Rica jumped into the running with the specific goal of denying Venezuela the second seat, but it lost out on Thursday. In the end, Brazil got 153 votes, Venezuela 105 and Costa Rica, 96.

The leftist government of President Nicolas Maduro has jailed opposition leaders and is accused of using torture and arbitrary arrests as it struggles to hold on to power amid a collapsing economy.

More than 50 countries have switched their recognition to national assembly speaker Juan Guaido as the country’s legitimate acting president.

“Due to serious human rights violations” confirmed by the United Nations, “the regime in Venezuela is not an adequate candidate for the Human Rights Council,” Costa Rican President Carlos Alvarado said at the time.

“It would be inadmissible for those who have committed human rights violations and crimes against humanity to sit on the council,” said Luis Almagro, secretary general of the Organization of American States.

Late last month the council created a group of experts to investigate human rights violations in Venezuela since 2014. The Caracas government called this a hostile act.

“There is certainly no precedent for Latin American countries to challenge one of their neighbors for a seat on a multilateral body in such a direct provocative way,” Christopher Sabatini, who teaches international and public policy at Columbia University, said in the run-up to the vote on Thursday. – Rappler.com