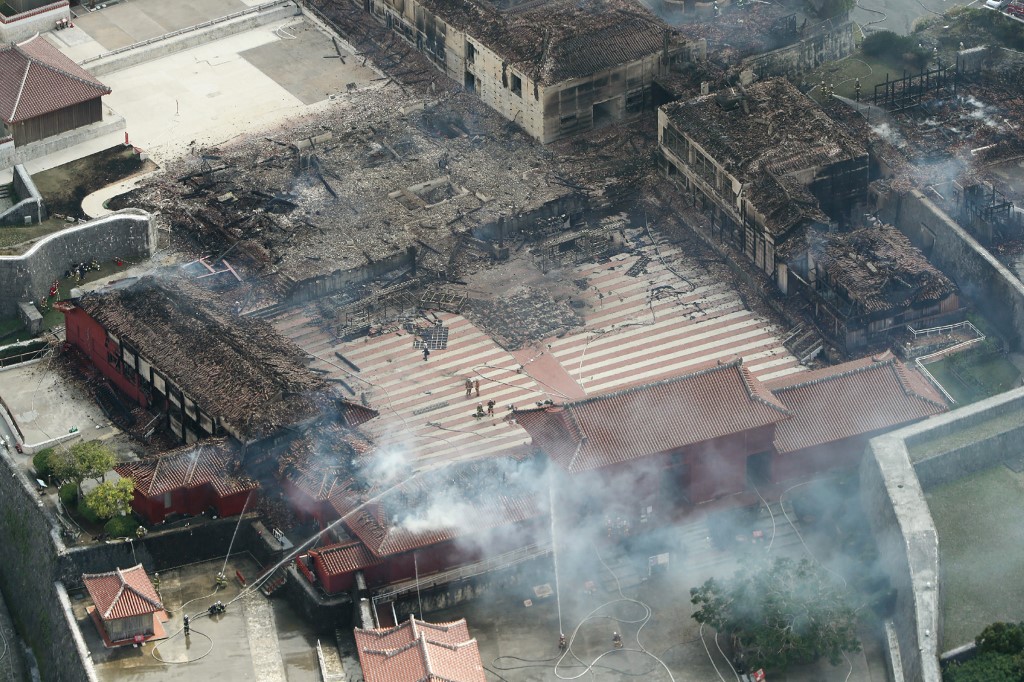 The Shuri castle is a key part of a complex dating back to the Ryukyu Kingdom, and is believed to have been in use from around the 1400s. Most of the current structures are reconstructions based on original plans and photos of the old castle.

The fire was brought under control by early afternoon, a local fire department spokesman told AFP, adding that the blaze had consumed more than 4,800 square metres (51,667 square feet) of the castle complex.

“All the (three) main buildings have burnt down, with nothing left behind,” Daisuke Furugen, another official with the Naha fire department, told AFP.

On the scene, a local fire spokesman said the blaze had proved extremely difficult to control.

“The radiant heat was very strong. Firefighters had serious difficulty approaching it,” he said in comments shown on national broadcaster NHK.

It was not yet clear what caused the blaze, which was reported to authorities around 2:40 am. There were no reports of injuries.

The fire started in the elaborate main building of the complex, a grand red structure with traditional tiling on the roof, and spread quickly to nearby buildings.

Television footage showed large orange flames engulfing the castle before sunrise, with daylight revealing the extensive damage done to the site. In some cases little more than charred and smoking wood was left behind.

“I am extremely saddened by this. I am utterly in shock,” Naha Mayor Mikiko Shiroma told reporters.

“We have lost our symbol.”

“Naha city will make our greatest possible efforts to do everything in our power” to deal with the fire and its aftermath, she pledged earlier, during an emergency meeting on the fire.

The national government pledged it would make “all efforts” to rebuild the site.

“I feel hollowed out… It’s been a symbol of Okinawa.”

Officials’ preparations related to an ongoing festival at the site had been ongoing until 1:00 am, hours before the blaze erupted. But it was not clear whether there was a link to the fire.

The complex was largely destroyed during World War II, when the headquarters of the Japanese army was dug underneath the monument.

But it was extensively restored, with the work on the main hall based on scale drawings and photographs taken before the destruction, as well as extensive archaeological excavation.

The complex reopened as a national park in 1992.

Thanks to the faithful nature of the reconstruction, the site along with the remaining ruins was registered along with other Ryukyu sites in the region as a World Heritage Site in 2000.

“Five hundred years of Ryukyuan history (12th-17th century) are represented by this group of sites and monuments,” the entry on the UNESCO website explains.

“The ruins of the castles, on imposing elevated sites, are evidence for the social structure over much of that period, while the sacred sites provide mute testimony to the rare survival of an ancient form of religion into the modern age.”

The reconstructed main hall of the Shuri castle in particular is praised as “a great monument symbolising the pride of the Ryukyu people”.

The facility’s Shurei-mon Gate, with its striking red-tiled roof, was featured on a special banknote issued in 2000 when the G8 summit was hosted in Okinawa.

And the Olympic torch relay for next year’s Tokyo Summer Games was due to pass by the site as it travels around the country in 2020.

Japan is dotted with historic castle complexes, most of which are careful reconstructions of original buildings.

Several have suffered damage from natural disasters in recent decades, including Kumamoto Castle in southern Japan, which was badly affected by a series of devastating earthquakes. – Rappler.com