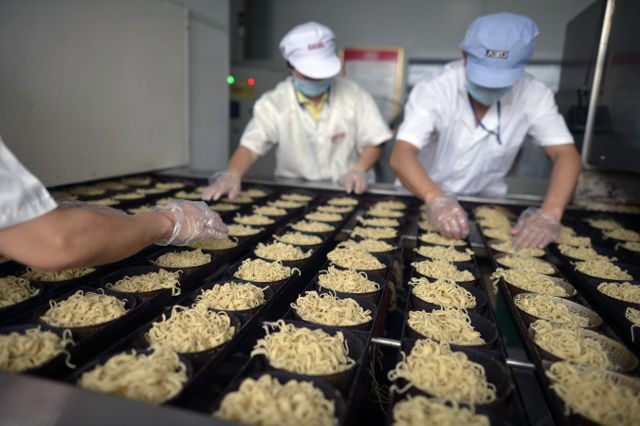 Health officials said sauce packages in the two flavors of instant noodles produced by Wei Lih Food Industrial Co. might be contaminated with dimethyl yellow, which is banned from food products.

Wei Lih said in a statement that its own tests found no traces of the banned dye in the suspected products, but they were recalling them as a precaution and apologized to the consumers for causing any unease.

As of Thursday, more than 10 tons of dozens of brands of dried tofu snacks and other tofu products were pulled from shelves for containing ingredients supplied by Chien Hsin company, according to the Food and Drug Administration.

Chien Hsin is under investigation for selling soybean emulsifiers that were adulterated with the industrial dye, which is linked to causing cancer in animals, to at least 44 manufacturers.

The administration has warned any manufacturer that used ingredients from Chien Hsin to recall their products by Saturday or risk a maximum fine of Tw$200 million (US$6.3 million).

Taiwan is reeling from a string of food safety scandals this year, which triggered public outrage contributing to the ruling party’s massive defeat in last month’s local elections.

Hundreds of tons of products made with “gutter oil” were recalled in a food safety scandal that surfaced in September. The scandal brought down the island’s health minister.

That was followed by a mass recall one month later when Taiwanese food giant Ting Hsin group was accused of selling oil intended for animal food.

Wei Ying-chung, a former Ting Hsin executive and one of Taiwan’s richest men, was taken into custody during the government investigation into the scandal and was later hit with nearly 140 fraud charges over his alleged role in the case. He faces a 30-year-jail term if convicted. – Rappler.com