Iran wants nuclear talks that lead to lifting of US sanctions, president says 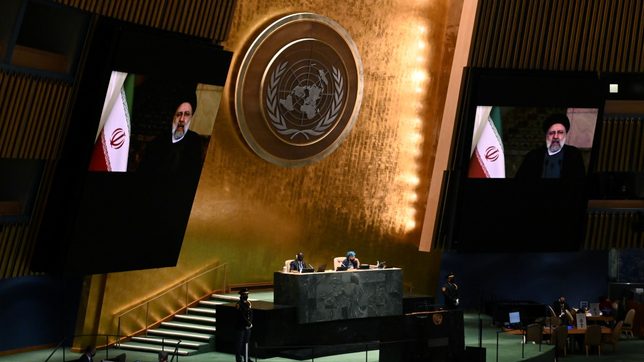 Iran's President's Ebrahim Raisi remotely speaks during the 76th Session of the General Assembly at UN Headquarters in New York on September 21, 2021. Timothy A. Clary/Pool via REUTERS

Timothy A. Clary/Pool via Reuters

Facebook Twitter Copy URL
Copied
'From the Capitol to Kabul, one clear message was sent to the world: the United States' hegemonic system has no credibility, whether inside or outside the country,' says Iranian President Ebrahim Raisi

Iran wants to resume nuclear talks with world powers that would lead to removal of US sanctions, Iranian President Ebrahim Raisi told the annual UN General Assembly on Tuesday, September 21, as negotiations about reinstating a 2015 nuclear pact have stalled.

“The Islamic Republic considers the useful talks whose ultimate outcome is the lifting of all oppressive (US) sanctions,” Raisi said in his pre-recorded address.

“The (US) policy of ‘maximum oppression’ is still on. We want nothing more than what is rightfully ours. We demand the implementation of international rules. All parties must stay true to the nuclear deal and the UN Resolution in practice,” he said.

Iran and the United States in April started indirect talks in Vienna on salvaging the nuclear agreement, but those stopped two days after Raisi was elected as Iran’s president in June.

Under the 2015 agreement, Iran curbed its uranium enrichment program, a possible pathway to nuclear arms, in return for the lifting of US, UN and EU sanctions. Former US President Donald Trump quit the deal three years ago and reimposed harsh sanctions on Iran’s oil and financial sectors that have crippled its economy.

Hardline cleric Raisi, who is under personal US sanctions over allegations of human rights abuses in his past as a judge, said the US sanctions “were crimes against humanity during the coronavirus pandemic.”

The reimposition of US sanctions by Trump in 2018 prompted Tehran to violate the nuclear deal’s limits. Tehran says its nuclear steps are reversible if Washington lifts all sanctions.

Raisi, echoing Iran’s official stance for years, said nuclear weapons “have no place in our defense doctrine and deterrence policy.”

Tehran signaled on Tuesday that the negotiations in Vienna would resume in a few weeks, without giving a specific date. Despite Iran’s need to bolster its economy by negotiating an end to US sanctions, insiders expect Raisi to adopt a tougher line when the talks resume.

Iranian and Western officials have said many issues remain to be resolved before the accord could be revived.

A strident critic of the West, Raisi said the United States had “no credibility to enforce its hegemony.”

“From the Capitol to Kabul, one clear message was sent to the world: the United States’ hegemonic system has no credibility, whether inside or outside the country,” Raisi said.

He was referring to the January 6 assault by Trump supporters on the US Capitol as well as the chaotic withdrawal of US-led forces from Afghanistan after the Taliban seized control of Kabul in August. – Rappler.com