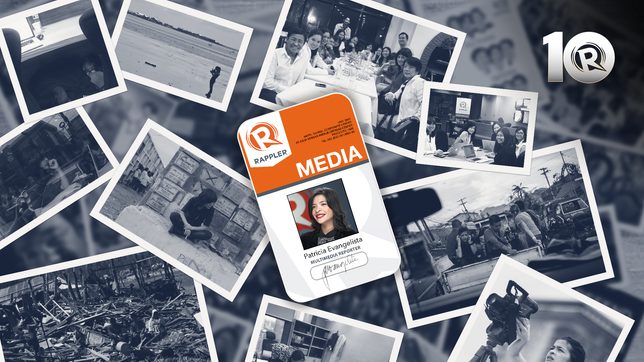 Facebook Twitter Copy URL
Copied
'I could write about the day I made a future Nobel Peace Prize Laureate cry in frustration. It was my fault, even if I still say she started it.'

We are publishing a series of essays from Rappler employees, old and new, as part of our commemoration of Rappler’s 10th anniversary in January 2022.

MANILA, Philippines – I was in the Rappler newsroom once, late on a May evening in 2013. Things were quiet. It had been an easy day, no coverage, just meetings and a documentary to edit. I’m not sure how we heard, maybe it was a tip, or maybe someone caught it off Twitter, but word was there was an explosion in a condominium building somewhere in Taguig City. The facts were unclear. Someone said it was an accidental methane blast. Someone else said it was terrorism. There were casualties. What it meant was that somebody had to run.

That somebody was me, and because I had gone to work wearing a short skirt and four-inch heels, one of the producers stripped off his belt so I could drag on someone else’s jeans and a pair of flip-flops two sizes too large. Out in Bonifacio High Street a cordon had snapped around the Two Serendra condominium complex. There were cop cars and ambulances. The investigation was underway. I filed that story, then the casualty list came out. Rappler sent me to find the families the next day. I narrowed it down to a pair of funeral parlors, caught an address scrawled on a whiteboard, and at three in the afternoon found myself sitting across a woman whose day had gone from ordinary to inexplicable.

She was at home, she said, when someone came to the door to tell her that her husband was dead.

I joined Rappler in the late summer of 2011. I was 26 years old, and while I did not believe, as Rappler did, that social media would make the world a better place, I did believe that journalism might make some headway if we tried hard enough. When we started, Rappler believed it could produce the new correspondent for the digital age, a one-woman news crew who could take photos, roll video, ask questions, live-tweet developments, file text stories, beat the competition, all while producing an on-camera report with nothing more than an internet dongle and an iPhone on a tripod. It was an experiment bound for failure, at least for me. I was the reporter who got lost on the way to the office and took half an hour to compose a single sentence. I could, as this is an exercise in memory, write about arguments over word counts and editing software and the color orange. I could write about the afternoon the editors finally bought a couch after discovering one too many reporters sleeping under desks. I could write about the day I made a future Nobel Peace Prize Laureate cry in frustration. It was my fault, even if I still say she started it.

Those stories are all true, but what is also true is that Rappler sent me to many places where the ordinary ended with a body on the ground. Ask me for a story about Rappler, and I’ll tell you that every story about Rappler is also a story about the people who told us theirs. I’m a trauma reporter. People like me work in the uneasy space between what is, and what should be. My stories were not moral, neither did they offer hope or upliftment or salvation. Sometimes, if we got lucky, someone would pay for a coffin, or a new salon chair for a barber out in Guiuan who lost his barbershop to a storm.

Those stories are rare, but they all began with the ordinary because it underscored what happened next. The blue sky before the flood of corpses. The kiss goodbye before the barrage of bullets. Once, after Super Typhoon Haiyan reduced Tacloban to rubble, I sat behind a camera in front of a man who asked if I could broadcast a message to his son. I focused the lens, pressed the record button. Please come home, Edgardo said, because Papa is making spaghetti for Christmas dinner. His son was gone, likely drowned, but Edgardo tried anyway because maybe the ordinary would bring his son home. I wrote about terrible things that happened because those things shouldn’t have happened and shouldn’t happen again.

Then, one day, the man who would be president promised the deaths of his own citizens. The terrible became ordinary, to thundering applause.

Night after night the gunshots spattered through the slums. Those stories also began with the ordinary. I woke up, said someone’s lover, and he wasn’t beside me. I was taking a bath, said someone’s mother, when I heard the shouting. I was at home, said someone’s daughter, when the cop kicked in the door and shot my father. I wrote down what I could, and while there were many who mourned, there were also many who read about the dead and said more should die.

As above, so below. Thirty-two shot dead in one province in a single night, what a beautiful thing, said the President.

We kept reporting. Our license was put in jeopardy. Many advertisers disappeared. Reporters were banned from the Palace, and some senior managers volunteered salary cuts to keep the lights on. Understand that Rappler was not alone exposing corruption or the brutalities of the drug war. Neither was it the only news agency under threat. Journalism is a tradition, and the line Rappler holds was drawn many years ago by men and women who planted their feet at the barricades and said no further. When brutalities are commonplace, resistance is the ordinary job of everyday journalism.

It’s been more than a year since I last published under Rappler. I left with the awareness that working for Rappler has the same permanent quality as getting married in the Philippines – no divorce permitted, no farewells allowed. I write this now because I was Employee No. 6 and expect to remain so long after I hang up my press credentials. I still think the orange is too bright. I still insist on Premiere Pro over Final Cut. I still don’t believe that social media will make the world a better place, but I trust that the record we keep will matter, if only as a memorial for those we lost.

Here is Danica Mae, all of 5 years old, who caught the bullet meant for her grandfather, and 16-year-old Charlie, whose mother tried to keep him safe. All their days began ordinary, and then there were gunshots.

Here is a true thing. When they died, it was not beautiful. – Rappler.com

Editor’s note: Patricia Evangelista is an investigative reporter for Rappler. She is on sabbatical to write a book and is expected to return to active duty when she meets her word count. We hope she finds her way to the office.