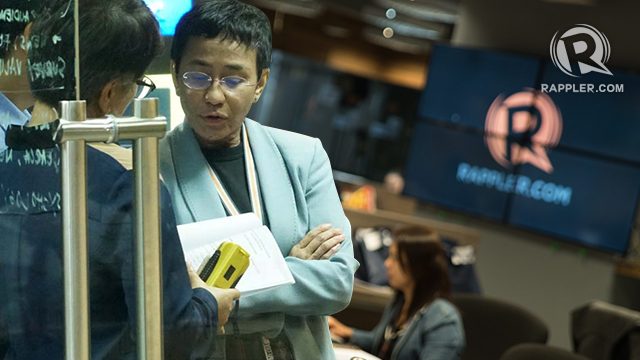 UNPRECEDENTED. Rappler, Maria Ressa, and other company officers and staffers face a string of cases under the Duterte administration.

MANILA, Philippines – As of December 3, 2021 there were at least 7 active cases pending in court against Rappler, its CEO Maria Ressa, as well as its directors and a former researcher.

The active court cases are the following:

Keng’s 2nd cyber libel case over Ressa’s tweets on the same story authored by Santos was dismissed on June 1, 2021. Keng withdrew the case himself, saying he wanted to focus his attention and resources to help respond to the pandemic.

Another libel suit, filed in October 2020 by former Benilde faculty member Ariel Pineda against Ressa and Rappler reporter Rambo Talabong, was dismissed by a Manila court on August 10, 2021, after Pineda dropped the case.

The trial of two other cases involving Ressa and Rappler’s Board members is suspended due to the following:

Here’s a list of complaints and cases filed against Rappler that started in January 2018, barely 6 months after President Rodrigo Duterte falsely claimed in his July 2017 State of the Nation Address that Rappler is “fully owned by Americans.”

The string of cases against Rappler and Ressa started with the revocation of Rappler’s license to operate through an order issued by the Securities and Exchange Commission (SEC) on January 11, 2018.

1. SEC vs Rappler at the Court of Appeals

This is the mother case where Rappler asked the Court of Appeals (CA) to invalidate the SEC’s revocation order. The CA on July 26, 2018 denied Rappler’s plea to reverse the commission’s order. But it also remanded the case to the SEC for review.

While the court said that a clause in the Philippine Depositary Receipts (PDR) issued by Rappler Holdings to one investor “would appear tantamount to some foreign control,” it stressed that the revocation of Rappler’s certificate of registration as a penalty should have been the “last resort.” (READ: What you should know about the Court of Appeals’ decision on Rappler)

The CA noted that the parties to the PDRs appeared to have acted in good faith and that the clause in question was “never exercised.” The court told the SEC that the donation of the PDRs to Rappler’s Filipino managers seems to have permanently removed the alleged “negative foreign control” which the SEC found objectionable.

Thus, the CA directed the SEC to review the revocation order and evaluate it given the donation of the PDRs to Rappler’s Filipino managers.

Status as of August 10, 2021: The case is pending with SEC. In its partial motion for reconsideration filed with the CA on August 17, 2018, Rappler asked the court to declare that the PDRs did not amount to any semblance of foreign control. In March 2019, the CA rejected Rappler’s motion and reiterated its order remanding the case to SEC.

The 3 counts are for violation of Section 255 of the Tax Code or failure to supply correct information in the Income Tax Return (ITR) for 2015, and Value Added Tax (VAT) returns for the 3rd and 4th quarters of 2015, and the 4th count is for tax evasion.

The CTA denied on February 7, 2019 the motion of Rappler Holdings Corporation to quash the case. On April 3, 2019, Ressa was arraigned in the 4 cases and pleaded not guilty.

During the May 29, 2019 hearing, CTA Presiding Judge Roman del Rosario recused himself from the cases after he expressed his view that RHC as an entity should be arraigned, a stand that the two other justices disagreed with. Justice Catherine Manahan was asked to preside over these cases.

Status as of August 10, 2021. The CTA dismissed the motion of Ressa and Rappler to file a demurrer of evidence, or to quash the case outright. The defense presented its first witness last January 22 and its second witness on February 3, 2021. The trial has come to a close and both sides await the court’s decision.

The 5th count of tax violation was part of the set that the DOJ approved for charging, but it was filed by the prosecutors at the Pasig Regional Trial Court (RTC). The DOJ argued that because the 5th count – related to the VAT return for the 2nd quarter of 2015 – amounted to P294,258.58, it does not meet the minimum amount required for CTA cases.

A provision in the CTA’s law says that the tax court must have original jurisdiction over all cases under the tax code “provided however that..the principal amount of tax involved exclusive of charges and penalties claimed is one million pesos or more.”

Status as of August 10, 2021. Ressa was arraigned and pleaded not guilty on July 22, 2020 before Pasig RTC Branch 157, now presided over by Judge Ana Teresa Cornejo-Tomacruz. On October 20, 2020, RHC was also arraigned through RHC chairperson Glenda M. Gloria. Prosecution was scheduled to present its first witness in August 2021.

Ressa was arrested on February 13 and was only allowed to post bail for P100,000 the following day. Santos posted the same amount on February 15.

The DOJ approved the charges even though the article in question was published in May 2012, or 4 months before the Cybercrime Prevention Act was enacted into law. The article written by Santos said that the late former chief justice Renato Corona was using certain SUVs, one of which was traced to businessman Wilfredo Keng, the complainant. Ressa had no editorial involvement in the story.

Keng filed the complaint only in October 2017. This complaint was dismissed by the National Bureau of Investigation (NBI) in February 2018 due to the lapse of the one-year prescriptive period for libel, only for it to be revived in March of the same year. (WATCH: Rappler’s cyber libel case in a nutshell)

In their complaint with the DOJ, the NBI included, aside from Ressa and Santos, members of Rappler Inc’s Board of Directors (Manuel Ayala, Nico Jose Nolledo, Glenda Gloria, James Bitanga, Felicia Atienza, James Velasquez) as well as its corporate secretary, Jose Maria Hofileña.

The DOJ eventually decided to bring to court only Ressa and Santos.

DOJ prosecutors said that due to the multiple publication rule, typographical edits made in 2014 put the article under the coverage of the law. The DOJ also said that the prescriptive period for cyber libel is 12 years and not one year.

On February 26, 2019, Ressa and Santos, through their lawyer Theodore Te, filed a motion  to quash the complaint. Judge Montesa junked the motion on April 12, 2019.

On July 23, 2019, the prosecution presented its first two witnesses. Read the story about that hearing here.

Judge Montesa on June 15, 2020 convicted Ressa and Santos of cyber libel. Both filed a partial motion for reconsideration on June 29, which Montesa rejected. An appeal is set to be filed with the Court of Appeals.

In the trial’s last hearing prior to the verdict, Rappler presented on the witness stand investigative head Chay Hofileña who edited the story in question. Keng’s lawyers still tried to pin down Ressa, who was not at all involved in the story. Keng’s lawyers asked Hofileña for the source of the intelligence on their client, but lawyer Ted Te invoked the Sotto law, which allows journalists to keep the identity of their sources.

Status as of August 10, 2021. Ressa and Santos filed their appeal before the Court of Appeals in July 2021.

8-9. Alleged violation of the Anti-Dummy Law and the Securities Code

This stems from the original complaint filed by the NBI that’s still related to the issuance of PDRs by Rappler. Before he resigned, former justice secretary Vitaliano Aguirre II ordered the NBI to investigate Rappler for any possible violation of “other laws.” On the basis of this order, the NBI conducted an investigation and found that Rappler purportedly violated the nationality requirement on mass media. Based on this finding, the NBI filed a criminal complaint with the Pasig prosecutor.

On March 26, 2019, the  Pasig Prosecutor’s Office charged the directors with violation of the Anti Dummy Law and the Securites Regulation Code. The complaint against Hofileña was dropped. Both cases were raffled off to Pasig Branch 265 Judge Acerey Pacheco, who later on decided to re-raffle the securities case to a commercial court, also in Pasig. For both cases, the board directors posted bail amounting to P216,000 each.

A separate case stemming from the anti-dummy complaint was raffled to Pasig Branch 158 under Judge Rowena San Pedro. On April 1, 2019, San Pedro found probable cause to charge the directors with alleged violation of the Securities Regulation Code. Each director posted bail of P128,000.

Ressa and the rest asked for a deferment of arraignment and for the court to remand the case to the office of the prosecutor.

In May 2019, Judge San Pedro on May 28 inhibited herself from the Securities Code case due to her friendship with Ressa. The case has been transferred to Judge Elma Rafallo-Lingan of RTC Branch 159.

Status as of August 10, 2021. Judge Lingan consolidated the two cases into one and remanded to the Pasig City prosecutor the case alleging violations of the securities code, saying it was filed in “undue haste.” Pending the prosecution’s review, the trial on the anti-dummy case was also suspended.

The Bureau of Internal Revenue (BIR) is determining whether Rappler should be assessed for tax deficiencies, following allegations in the criminal cases filed at the CTA and Pasig RTC.

Former interior undersecretary, now agrarian secretary, John Castriciones filed a libel complaint with the Quezon City Prosecutor’s Office against reporter Rambo Talabong over a series of reports on conflicts among officials and employees at the Department of the Interior and Local Government (DILG) in 2017.

Castriciones also filed a libel complaint against Ressa, who, again, did not have editorial involvement in Talabong’s reports.

Status as of December 2019. The complaint was dismissed in November 2019 by the Quezon City Prosecutor’s Office.

On November 23, 2020, Ressa was charged a 2nd time with cyber libel over similar circumstances as the Manila case and filed by the same complainant, Wilfredo Keng.

Makati prosecutors charged Ressa despite a Supreme Court decision saying that aiding and abetting a cyber crime – in this case sharing a supposedly libelous post – is not a crime. Makati prosecutors said the act of taking a screenshot and then posting them on Twitter are not knee-jerk reactions but a malicious act.

Ressa called this indictment a wrong test case that would serve as a bad precedent in the social media era.

On January 5, 2021, Judge Fider-Reyes inhibited herself from the case, citing a threatening email she received.

Status as of June 1, 2021: The case was dismissed by Makati RTC Branch 148 Judge Andres Soriano after Keng withdrew.

Ressa and Rappler have said these cases constitute a clear pattern of harassment against independent media and are meant to intimidate the organization.

In October 2020, Benilde faculty member Ariel Pineda filed in Manila a libel complaint vs Ressa and reporter Rambo Talabong over Talabong’s January 2020 story that accused Pineda of collecting money from students in exchange for a passing grade in their thesis.

Rappler journalists to court: How is a properly sourced story libelous? On January 11, 2021, the judge issued the arrest warrants vs Ressa and Talabong. They were able to post bail.

More on Rappler’s cyber libel case that led to the conviction of Ressa and Santos: