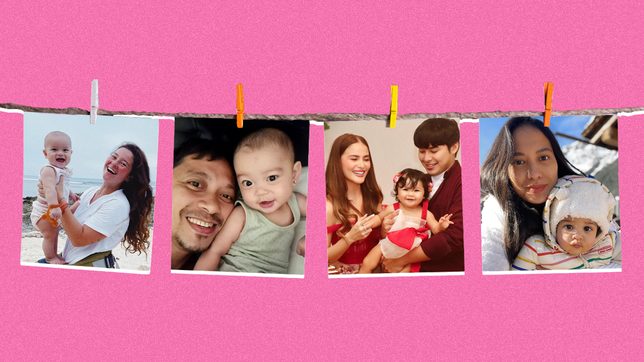 MANILA, Philippines – The COVID-19 pandemic might have continued to challenge us this 2021, but it was still a year of excitement and new beginnings, and it was particularly fruitful for celebrity mommies and daddies.

For them, the arrival of their newborns signal a new source of hope and strength. Some are first-time parents, while others are seeing their families continue to grow.

There’s really nothing like the joy of seeing new life come into the world, so let’s look back at some of the celebrity babies who were born this 2021.

2021 began with a shocking revelation from Janella Salvador and Markus Paterson. After months of speculation, the celebrity couple announced on January 5 that they were parents to a baby named Jude Trevor.

In a vlog, they revealed that Jude was born in the United Kingdom on October 20, 2020. The video also included behind-the-scenes footage from Janella’s maternity shoot, and why the couple decided to keep the actress’ pregnancy a secret.

It was in September 2020 when Janella and Markus went public about their relationship, after being linked together in 2019.

Koa is Andi’s second child with fiancé Philmar Alipayo. They share a daughter, Lilo, born in 2019. Andi also has a daughter, Ellie, with ex-boyfriend Jake Ejercito.

The two have a daughter, Mimi. Pampi also has a son, Thirdy, from ex-wife Jodi Sta. Maria.

They first revealed they were expecting in September 2020, after announcing their engagement in June that same year. Mark and Nicole, who first worked together in the GMA afternoon series Bihag, made their relationship public in June 2019.

Celebrity stylist Liz Uy announced on March 3 that she had given birth to a baby named Matias.

Matias is Liz’s second child with businessman Raymond Racaza. Xavi, their eldest, was introduced to her followers in 2018. Raymond, meanwhile, has a daughter, Nala, with ex-wife Geraldine Zamora.

They first announced Maia’s pregnancy in November 2020. The couple celebrated 10 years together in July 2021.

In a vlog, the celebrity couple revealed that Sophie gave birth to Avianna on March 15. Vin and Sophie got engaged in December 2020 after being together for eight years.

The UK-based theater actress first announced her pregnancy in November 2020. She and Martin wed in April 2018.

Alice Dixson revealed on April 21 that she had welcomed her first baby. At the time, the 51-year-old actress kept details about her newborn private, and only referred to her baby as her “little miracle.”

It was only on a May 8 Eat Bulaga episode that the actress shared that she had a daughter named Aura. She also revealed that it was through a surrogacy birth.

Alice has also kept her partner’s identity secret, but has been with him for a long time – in an August 2017 interview with Boy Abunda, she said that she had already been with her partner for four years at that time.

Model and entrepreneur Isabelle Daza announced on April 21 that she had given birth to her second child, a son named Valentin, with husband Adrien Semblat.

Isabelle and Adrin married in Italy in September 2016. The couple’s first son, Baltie, was born in March 2018.

Jopay and Joshua wed in June 2014. In December 2017, the couple welcomed their first daughter, Isabelle Alessa.

Model-host Georgina Wilson introduced her daughter Charlotte Arabella on May 3. Charlotte is Georgina’s third child with husband Arthur Burnand. They welcomed their eldest, Archie, in December 2016, and their second son, Alfred Thor, in June 2019.

Georgina and Arthur married in April 2016.

Roxanne Barcelo shared on June 7 that she was already a first-time mom. At the time, the 36-year-old actress did not disclose other details about her newborn.

It was only on December 22 when the actress shared a photo showing the faces of her husband and baby. She revealed that her husband’s name is Jiggs and that their son is called Cinco.

Roxanne had announced earlier that month that she had gotten married. But back then, she hadn’t disclosed when the wedding had taken place, nor any information about her partner’s identity.

Celebrity couple Joyce Pring and Juancho Triviño revealed that they welcomed their first son Alonso Eliam on July 2. “There has never been a more joyful time in our lives,” Joyce wrote on Instagram.

Joyce and Juancho wed in February 2020.

In a separate post, the 46-year-old beauty queen said that it was a “miracle pregnancy” considering her age and previous diagnosis of almost infertility.

Miriam and Ardy tied the knot in 2014. They welcomed their first child, Elijah, in February 2019. Ardy also has a son, Joshua, from his late wife.

Actor Patrick Garcia announced on July 15 that his wife Nikka had given birth to their fourth baby, a boy named Enrique Paolo.

Krisitne and Oyo, who have been married since 2011, are also parents to sons Kristian Daniel, Kaleb Hanns, and Marvic Valentin, and daughter Ondrea Bliss.

Sam and Anthony were together for three years before tying the knot in March 2021.

In a vlog, the couple said that the birth of Iñigo was a “totally different experience” from that of their son Pio Joaquin, who was born in December 2017, because of the COVID-19 pandemic.

Kaye first announced that she was pregnant in February 2021. Kaye and Paul Jake wed in December 2016.

In a separate post, the singer detailed her struggles in her pregnancy journey. She revealed that aside from being diagnosed with antiphospholipid antibody syndrome (APAS), she also faced a cancer scare, underwent an open surgery while being pregnant during a pandemic, and eventually delivered Osseah via an emergency cesarean section.

Sitti announced her pregnancy in April 2021, calling it “another miracle.” Sitti and Joey married in 2015. They welcomed their first child in 2018.

Desiree and Boom married in January 2018. Boom has another son, actor Tony Labrusca, from his previous relationship with Angel Jones.

Former actress Neri announced her second pregnancy in May 2021. Chito and Neri got married in December 2014. The couple welcomed their first son Alfonso in November 2016.

Singer-actress Nikki Gil announced on October 10 that she had given birth to her second child, a daughter named Madeline Elle, with husband BJ Albert.

Nikki announced her second pregnancy in April 2021. She and BJ wed in December 2015. The couple welcomed their first child Finn in November 2017.

Rachel announced her pregnancy in May 2021. Migz and Rachel got married in July 2021.

Celebrity couple McCoy de Leon and Elisse Joson announced on October 31 that they were parents to a baby girl named Felize McKenzie.

The couple, however, did not disclose when Elisse gave birth to their daughter.

McCoy and Elisse met when they became part of Pinoy Big Brother: Lucky 7 back in 2016. In 2018, they announced their breakup. The two sparked reconciliation rumors in September 2020 after the actor posted a sweet photo of him and Elisse. In June 2021, both confirmed they were back together.

Former Sexbomb dancer Sunshine Garcia announced on November 13 that she had given birth to her second child, a baby named Alexander, with husband Alex Castro.

Sunshine and Alex wed in March 2019. They welcomed their first child, Axel, in September 2018.

Miss World Philippines 2018 Katrina Rodriguez announced on November 15 that she had given birth to her first child with partner Niño Barbers.

The model-beauty queen introduced her son as Robert Joaquin. She also revealed that he was born on August 25 through a water birth delivery.

Nadine Samonte announced on November 30, that she has welcomed her third child, a daughter named Harmony Saige, with husband Richard Chua.

The former actress also recalled how difficult her pregnancy was. Nadine has opened up about her struggles related to her pregnancy, including nearly losing her baby due to pregnancy complications and having polycystic ovary syndrome (PCOS) and antiphospholipid antibody syndrome (APAS).

Nadine and Richard wed in October 2013. They welcomed their daughter Heather Sloane in August 2016, and son Augustus Titus in April 2019.

Aside from these local celebrities, several Hollywood stars have also welcomed their bundles of joy this 2021.

Crazy Rich Asians star Henry Golding announced on April 6 that his wife Liv Lo had given birth to their first child.  Celebrity couple Macaulay Culkin and Brenda Song welcomed the birth of their son Dakota on April 5.

Wonder Woman star Gal Gadot announced on June 29 that she had given birth to a daughter named Daniella. Daniella is Gal’s third daughter with husband Jaron Varsano.

Aquaman actress Amber Heard disclosed on July 2 that she had privately welcomed a baby girl named Onnagh Paige via surrogacy in April. Singer Halsey welcomed her first child on July 20.

Colin Jost confirmed on August 19 that wife, Black Widow actress Scarlett Johansson, had given birth to their first child. Actress and singer Mandy Moore gave birth to her first child with husband Taylor Goldsmith on August 24. They named their son August Harrison.

Do you know of any celebrities who welcomed a child this 2021? Let us know in the comments section! – Rappler.com