In an interview with Boy Abunda on Sunday, May 30, Rabiya opened up about her pageant experiences and her plans after Miss Universe 2020. 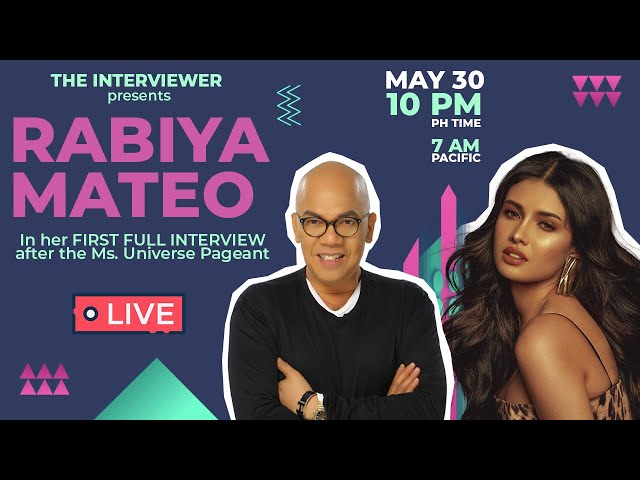 “Sobrang saya (I’m so happy), I can say that I’m more relaxed now. Wala na ‘yung pressure (there’s no more pressure) and burden on my back. I’m just having the best time of my life,” she said.

Rabiya said she learned how to “enjoy the moment” and to “love myself even better now” because of the competition. But the Philippine representative could not help but recall how tough her pageant experience was.

“What I’ve been through has never been easy. I know it’s gonna be hard but not as hard as what happened in the competition. It was a test of character and a test of faith,” she said.

“From the moment I won Miss Universe Philippines until the Miss Universe competition, binugbog ako (I was beaten up) emotionally, mentally. I tried to be strong and hold myself together,” Rabiya began.

The 24-year-old Iloilo native recalled that she wasn’t prepared for the pageant drama and intrigue. “[I was] someone who is so naive, that was my first time to join a national competition. Kahit sinasabihan ka na ‘you need to prepare for this, for that’ once na dumating ka sa point na ‘yun, magugulat ka pa din.’”

(Even if they advise you to prepare for these things, once you experience it yourself, it catches you off guard.)

“Even the moment I won, I didn’t have that sweet victory. The day that I was crowned, that joy was taken away from me. Iniisip ko lang, ang dami ko talagang pinagdaanan (I just realized that I went through a lot),” she said.

The Miss Universe Philippines coronation in October 2020 was surrounded by controversy after some candidates posted cryptic messages on social media, insinuating that the results were rigged.

“I’m not even sure how to express myself, how to react. With all the negative thoughts, I’m not even sure if I did an interview and shared my side of the story, it will tell the truth,” she said.

“I didn’t want to add fuel to the fire. I tried to keep as quiet as I could. I tried to continue my journey even though inside I was falling apart.”

Looking back, Rabiya said that the choice to keep quiet was the right thing to do. “I have the organization with me, they defended me to the public. That was the best thing to deal with the issue,” she added.

“When I won, I didn’t feel like a winner… Ang daming tinapon na hindi ko magawang ipagtanggol ang sarili ko (There were so many comments and I couldn’t even defend myself,)” she said.

Rabiya said the most hurtful remark accusations that she was a mistress. “I was raised by a single mother, lahat-lahat nang pinagdaanan ko, pinaghirapan ko ‘yun (Everything I achieved, I worked hard for it). I have my moral values with me.”

Rabiya said she chose to see the experience in a positive light. “It needed to happen. I need to be stronger for Miss Universe. Isa rin ‘yung sa mga rason kung bakit ako gustong makilala ng mga tao (That issue made more people curious about me),” she said. After her Top 21 finish in the Miss Universe pageant, Rabiya admitted that she was initially disheartened by the results.

“When I didn’t get called in the Top 10, nanlamig ako. ‘Yun na ‘yon? (I was shaken. That was it?) Months of sacrifices and hanggang doon na lang ako (That was the end for me)?.  I was crying,” she narrated.

Rabiya said she realized that all candidates put in so much efforts for the pageant. “I cannot discredit them… [the crown] just wasn’t meant for me. Sa position naman ng judges, hindi ako ‘yung hinahanap nila that night (I didn’t fit the criteria the judges were looking for). I truly understand. I was just thankful na nakapasok pa rin ako sa Top 21 (that I still got in the Top 21).”

Rabiya admitted the expectations got to her. “I was so afraid to fail, I needed to please the Filipinos, I needed to sacrifice a lot of things… I even asked myself ‘Is this even worth of everything?’”

She confessed that she started to self-loathe during the competition. “I had life coaching sessions just to get through this kind of thing,” she said.

“It’s difficult to be in that position pero alam ko na binigay ko ‘yung lahat (I gave my all),” Rabiya said. She added that despite the results, she still considers herself blessed to meet nice and supportive people in her Miss Universe journey.

(I wasn’t able to bring home the crown but I feel loved by Filipinos. It wasn’t a perfect performance but they saw and appreciated all my efforts.)

Now that the Miss Universe pageant competition is over, Rabiya said she’s decided to stay in the United States for a while.

“That was my favor to the organization, if I can stay a little bit longer. Since this is my first time to stay out of the country, I really want to make memories, meet people, and I’m planning to look for my dad… I’m positive I’m gonna meet him, ” she shared.

Rabiya said that she doesn’t hold a grudge against her father. “He abandoned us for 19 years but I still love him and I still long for him.”

She added that their family situation molded her to be a strong woman. “He built me to be a queen and to build my empire, I’m thankful for that.”

Rabiya said she might not be joining pageants anytime soon. “Let’s give it like two years, let’s see. I’m not closing any doors,” she said.

However, Rabiya said she has plans to enter the entertainment industry. “I wanted to try showbusiness. I might go into acting, I’m gonna talk to management. In the coming days, I’m gonna sign up for a network,” she shared.

Rabiya added that she’s also looking forward to her homecoming in Iloilo. She said she’s planning to go back to the Philippines around July 2021. – Rappler.com