Facebook Twitter Copy URL
Copied
After a sudden postponement, the Miss World 2021 coronation night finally gets a new date, and will still be globally broadcast from Puerto Rico 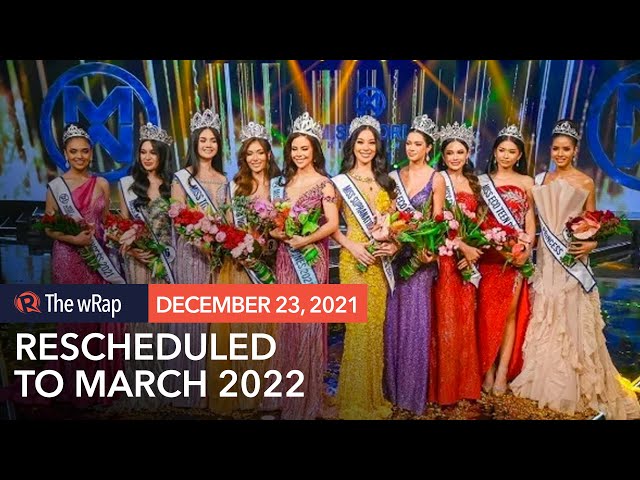 MANILA, Philippines – After being postponed on the day itself, the 70th Miss World 2021 coronation night has been rescheduled to March 16, 2022, and will still be globally televised from Puerto Rico.

In a Tuesday, December 22 Facebook post, Miss World organization president Julia Morley said that they are “so excited that we are staying in Puerto Rico to crown the new Miss World,” and that the “countdown and final planning has begun.”

The pre-recorded content that had already been taped in Puerto Rico over the past four weeks – featuring the country’s culture, landscape, beaches, tourism spots, and locals – will be aired internationally during the March 16 pageant finale, which will be happening at the Puerto Rico Coliseum Jose Miguel Agrelot. It is the first time for a Spanish-speaking country to host a Miss World coronation night.

Tickets that were purchased for the December 17 event will still be accepted for the rescheduled show.

Miss World 2021 was originally scheduled for December 17 – the same date the organization announced it would be postponed due to health and safety concerns.

“After additional positive cases were confirmed this morning after consulting with health officials and experts, the postponement decision was made. Contestants and staff have since been placed under quarantine, at the instruction of medical experts,” the organization said.

On December 21, Tracy said she was leaving Puerto Rico and coming back home to the Philippines after the postponement, saying that she was “still blessed” and “grateful” despite the circumstances.

Tracy, 26, is vying to be the second Filipina to win the Miss World crown after 2013’s Megan Young. The Miss World Philippines 2021 winner is among the top five finalists for the pageant’s Beauty with a Purpose (BWAP) event. – Rappler.com