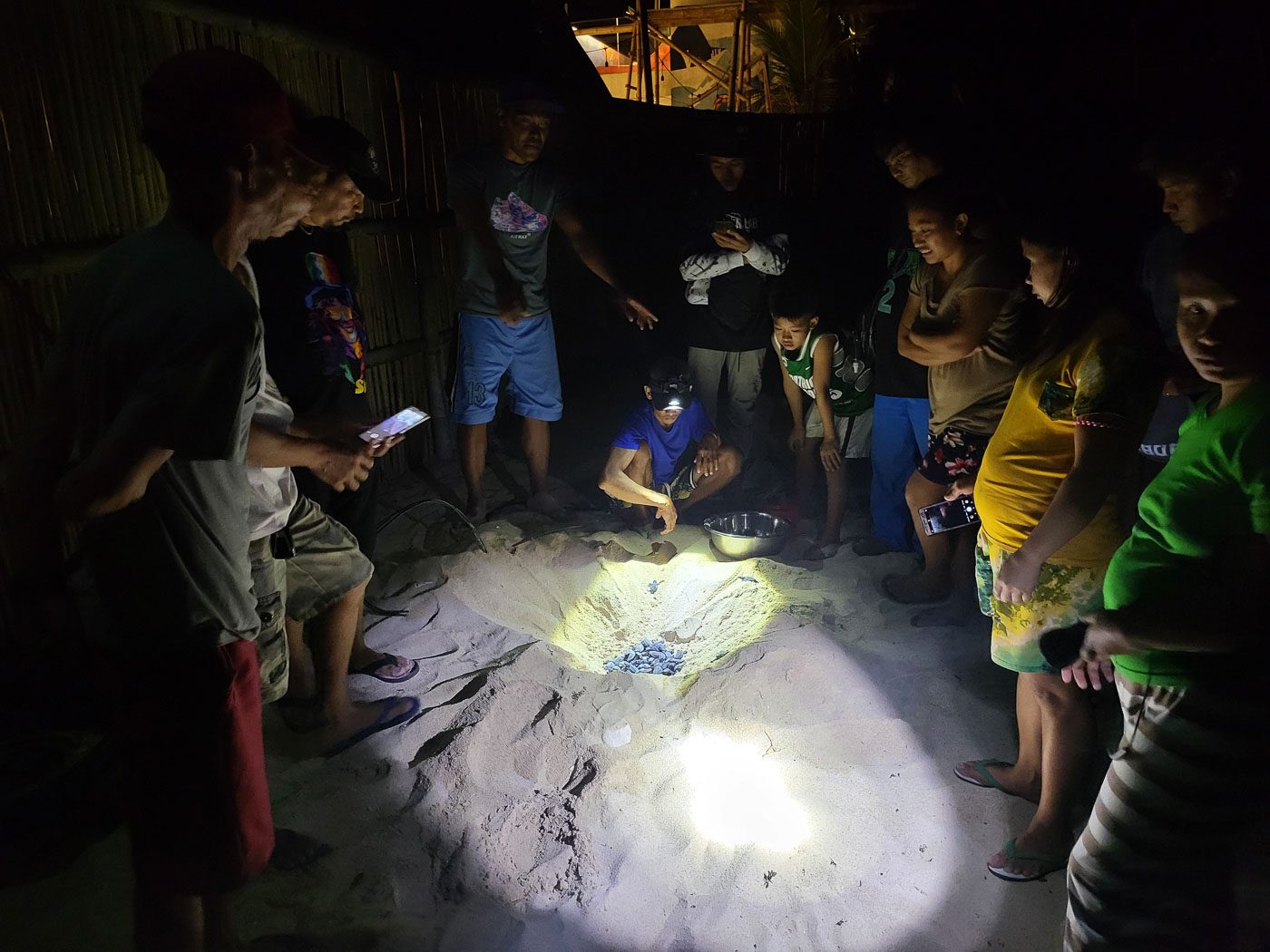 Facebook Twitter Copy URL
Copied
What should you do when you see turtle hatchlings on the beach?

“Pawikan! Ang dami (Sea turtles! There are lots of them)!” shouted Richmond Ubalde, the caretaker of Balay Prinsesa Beachcamp in Pao, Burgos, Pangasinan.

It was already nighttime, but we hurriedly ran to where he was standing, thinking of many big turtles suddenly appearing and wading at the shore. But our thoughts proved to be wrong; to our surprise, we instead saw tiny black turtles slowly digging their way out of the sand. One by one, they came out until so many of them crawled around. The pawikans had hatched.

The locals gathered around and noisily looked at them with surprise, awe, joy, and laughter. Mobile phones and flashlights were switched on to light them and, of course, to photograph them and take the usual selfies. They had not seen such an event in a very long time. Nobody knew what to do.

One started picking up turtles and placing them in a basin. Another wanted to bring them directly to the sea, while another was shouting “Hayaan lang sila (Let them be)!” I texted and called some friends in the conservation sector, but it seemed they were already sleeping as it was already half past 10. My son said, “Leave them ‘di ba (right)? They’ll instinctively go to the sea kasi dun na ang dagat (because it’s already there).” He also sent me screenshots of notes about baby turtles. Friends would later text their advice of minimizing light sources to avoid disorientation of the baby turtles.

I also called up my friend Nilo Tamoria, Southern Luzon regional executive director of the Department of Environment and Natural Resources (DENR). He said to let them be, just secure their area to keep away dogs and other predators. And so we did. Nilo also messaged, “Kelangan din pabayaan na sila maglakad para sa geolocation nila…para sa pagbabalik uli nila when mature na to lay eggs. Kung mahahanap rin ‘yung pinag-itlugan, mark the location din.” (Let them walk already for their geolocation…so they can come back when they’re mature enough to lay eggs. If you can find where they laid the eggs, mark the location, too.)

I told him the nest was just near and in front of the beach camp where we were staying in. The folks had placed plywoods around the nest to keep the dogs away. Those placed in the basin were returned to the sand. The Bantay Dagat also arrived at the site. I overheard them discussing, “Hayaan lang makapunta sa dagat, pero kumuha ng sampu para maipakita sa DENR at mai-record, ire-release din later.” (Just let them get to the sea, but pick out 10 to show to the DENR so they can be recorded; they will also be released later.)

We went back inside the beach camp and continued our session. We were actually drinking beers, two-by-two gins, and wine while feasting over newly caught kinilaw na flying fish that Billy Boda, a local fisherman and construction worker, caught a while ago when Richard’s shout jolted us. The stories now were all about pawikans in the area.

Pawikans used to come and go in Pao, laying hundreds of eggs and having tiny hatchlings crawling back to the sea. But the beach was heavily damaged for about a decade in the late 1990s when the shore was mined for its shiny little pebbles. “Binuracay ito, sir” said Manny Boda, another local fisherman and construction worker. Truckloads of shiny little pebbles in various sizes being hauled out were a daily occurrence. The “boracay” pebbles were sold to stores along Epifanio delos Santos Avenue (EDSA) in Balintawak.

When Major Domingo Doctor Jr. was elected town mayor in 2001, he put a stop to the pebble mining that made the beach look like the moon with many craters. But what followed next was the felling of coconut trees for their lumber. “Kanyugan daytoy idi, sir,” the folks said, referring to the beach as an area with numerous coconut trees. Now one can count the remaining coconut trees with his hands.

Through the years, the beach slowly recovered and that night’s incident was truly a joyful event. Prior to that, Johmar Garcia, a fisherman and construction foreman, saw around 10 turtles about two days ago, and was quite surprised with the many house flies around the nesting site. At that time, he never thought that that place was a turtle’s nest.

The locals have some good stories about the pawikans, like what Johmar said about his father and others who usually gathered turtle hatchlings to feed them for a week or two with bits of fresh fish they caught. They would then release the hatchlings to the waters. They thought that the hatchlings, if left alone, would not even make it to the shore because of the rough stones that lined the shore.

They also told us of their belief that the parent turtles are usually at a distance from the shore waiting for their babies after their eggs hatch, which is usually about 50 to 60 days after their eggs are laid. Director Tamoria said there are about 110 to 115 eggs per clutch. Someone told us that night that they counted about 120 hatchlings. He said he already alerted Pangasinan Provincial Environment and Natural Resources Officer (PENRO) Raymond Rivera of the hatchlings.

But there are also not so good stories, like the ones told by my cousins Harry Torres and Ferdinand Espanol about turtles being openly hauled, sold, and butchered in the public market, and their eggs boiled and eaten. The practice was stopped during the time of mayor Alberto Guiang in the late ’90s.

But even if the practice was halted, pawikans were still poached in that part of the West Philippine Sea by Chinese fishermen. They have seen Chinese vessels full of poached pawikans towed to shore by Philippine Coast Guards, who were on guard mainly for drug and motorcycle smuggling and dynamite fishing, among others.

At 7:30 am the following day, Director Tamoria relayed the message from PENRO Rivera that the Alaminos City Community Environment and Natural Resources Officer (CENRO) team was already on-site. We went to the Bantay Dagat station to meet the team of Forest Technician Kevin Lingaling and Park Maintenance Foreman Jerry Valenzuela. Nick Braga, head of the Bantay Dagat of Burgos, told us that he also alerted the same offices last night.

At the Bantay Dagat station, we saw a basin full of hatchlings swimming. They apparently gathered about 84 hatchlings during the night while the rest were able to go to the sea. When the Alaminos CENRO team arrived, they immediately released them to the sea.

This was my very first experience seeing turtle hatchlings wriggle towards their habitat. Braga reported that just the other day, they also released 74 hatchlings in Cabongaoan beach, a nearby beach sitio in the same barangay. Unlike Pao, whose white beach is underdeveloped because the road leading to it remains one-way, rough, and unpaved, Cabongaoan’s popular beach is teeming with resorts as the road near the beach is all paved and two-way.

The baby turtles were identified as olive ridley sea turles (Lepidochelys olivacea). They are the second smallest and most abundant of all sea turtles, and yet they are classified as endangered by both the International Union for the Conservation of Nature (IUCN) and the DENR. This species is known for their unique synchronized mass nesting, popularly known as arribadas, where thousands of female turtles come together on the same beach to lay eggs. No wonder the hatchlings found in the same long stretch of Burgos shoreline were found and seen almost at the same time. There are seven turtle species all over the world and the Philippines has five of them: green sea, hawksbill, olive ridley, leatherback, and loggerhead turtles. All of these turtles are classified endangered by IUCN, with the hawksbill as critically endangered.

The confusion on how to handle hatchlings of this protected turtle species that night was one big realization for the need to incorporate in basic education the proper and appropriate way to handle not only the baby turtles but also when the parent turtles come to shore to lay their eggs. I was assured by Braga that they had relayed that to the Department of Education, and I was glad to hear that, and I hope that public school teachers of Burgos are teaching their students about pawikans.

Still, there is a need to orient visitors, tourists, and the local folk on the proper and correct attitude and handling of this endangered species. I would suggest that barangays and towns with shores known to have nesting sites of turtles and hatchlings be made aware of these procedures, just like the information in the links that my son provided me. The local folk may be aware of these matters at heart, but posters and information and education materials must be present at beaches, especially if these are tourist sites, for the awareness and education of tourists, guests, and visitors as well. These campaigns must always be undertaken year-round, but most especially during November to February, when turtles lay eggs and when hatchlings go back to the sea. I am sure the incumbent Mayor Jesster Allan Valenzuela will certainly lead this initiative, just as former mayor Ronald Ngayawan led the weekly beach cleanups during his term.

Come to think of it, I have not experienced being oriented, nor have I seen posters and information materials of these turtles at beaches and resorts of Burgos for the many times I have visited my mother’s hometown. All local governments may need to be encouraged to launch an awareness campaign to save and conserve turtles. Let’s save our turtles! Let’s make our beaches friendly to them, as shared space between man and nature. – Rappler.com

Alain Pascua is the author of “Haring Ibon: The Great Philippine Eagle,” the only book that singularly focuses on the Philippine national bird. He co-founded the Wild Bird Photographers of the Philippines. His photographs of the Philippine endemic birds have been featured in numerous publications both locally and internationally. His Ang Banog portrait of the Philippine Eagle has recently graced the cover of the historic “All the Birds of the World” book that features 11,524 bird species in 20,865 illustrations. He is a former undersecretary of the Department of Education.