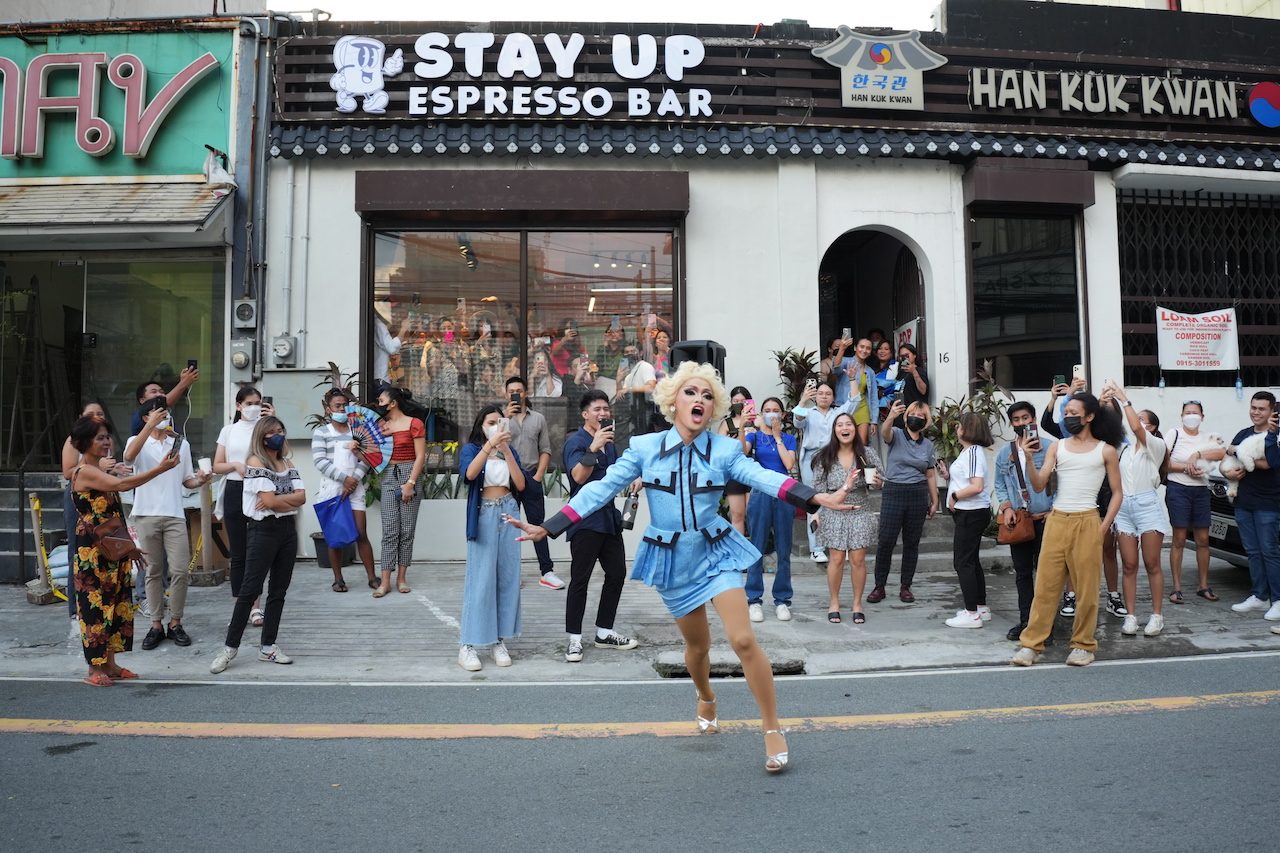 DRAG SHOW. Brigiding performs on the sidewalk for the opening of Stay Up Espresso Bar

Courtesy of Stay Up Espresso Bar

MANILA, Philippines – Drag Race Philippines has come and gone, and Filipino drag queens, it seems, have never been busier. If we ever wondered what the local drag scene would look like when it hits the mainstream, this might be it.

Imagine a tiny coffee shop filled to the brim with people, a tinted van parked outside its huge bay windows. Everyone inside is waiting for the van’s doors to open, as RuPaul’s “Sissy that Walk” blares on giant speakers. Just when it feels like the wait is taking a little too long, someone starts.

“Oh my gosh!” yells a disembodied voice – and the source of their shock is right across the street.

Strutting in a tulle cape and a black bodysuit in the middle of the late afternoon commuting crowd is a drag queen. And not just any drag queen, either, but Precious Paula Nicole, by title the Philippines’ first drag superstar, following her win at Drag Race Philippines.

Bystanders stare, but of course they do. No one crosses the street quite like Precious does in that moment – with a runway march and a twirl as she goes from one crosswalk to another, tracing half of that busy intersection of Brixton and United streets.

Precious was not the only drag queen to literally stop traffic on that afternoon.

On November 3, Stay Up Espresso Bar opened its third branch in Kapitolyo, in a small space next to what used to be a Korean restaurant. To celebrate, they invited seven local drag queens, all but one of them recently famous for starring in the inaugural season of RuPaul’s Drag Race.

On the day of the event, the tiny coffee shop was made even smaller by the crowd that had gathered for the opening. And while everyone clearly enjoyed the free-flowing espresso-based drinks, the generous charcuterie, and the pillowy pastries, their caffeine-induced chatter revealed one thing: pretty much everyone was there for the queens.

It seemed a bit random, having drag queens at a coffee shop launch. Sure, drag brunches are a time-honored tradition (one that is kept alive locally by croissant purveyor Butterboy), but aren’t coffee shops supposed to be relaxed, understated spaces made for studying, reading, and chit-chat? Drag performances are not exactly relaxed or understated.

Not to mention, by the time the event was about to begin, the only space left at the coffee shop was a small sliver of floor between the counter and the crowd. Drag queens are larger than life! How would they perform there?

As it turns out, drag queens don’t need a lot of space. They work with what’s given to them and make no bones about it. Award-winning drag queen and podcaster Myx Chanel proved as much when she opened the show with a lipsync of Kristin Chenoweth’s “Taylor the Latte Boy,” draping herself across the counter and making eyes at the barista throughout the song.

Drag Race Philippines season 1 runner-up and recording artist Marina Summers filled the room with her sex appeal as she performed what has now become her signature song, RuPaul’s “Call Me Mother.” She gyrated and vogued and did death drops across the floor, and even, at one point, made out with a strawberry that she plucked from the food display.

She was followed by Drag Race Philippines’ Miss Congeniality Lady Morgana, performing a remix of Faye Dunaway’s monologue in the 1981 film Mommie Dearest in a number that made the space feel like a theater.

Rounding out the first set of performers was Eva Le Queen, who lipsynced to Whitney Houston’s “Wanna Dance With Somebody” while holding a Stay Up coffee cup, and became the first queen that day to take the stage to the streets as she frantically crossed the intersection to the song’s final choruses.

After a quick intermission, the next set of performers were introduced: Brigiding, Viñas Deluxe, and Precious Paula Nicole, also known as the drag trio Divine Divas. Attention was called to the tinted van parked right outside the coffee shop’s windows, and Brigiding emerged from it first, lipsyncing to the Broadway classic “Don’t Rain on My Parade,” dancing on the sidewalk before eventually planting herself in the middle of the intersection, joyfully playing traffic patrol as her number ended.

Viñas went next, bringing the sidewalk to life with Beyonce’s “Single Ladies,” before eventually entering the coffee shop and flirting with random people from the crowd. Precious closed the show with her aforementioned traffic-stopping performance, which ended with a live bird being released inside the coffee shop.

Drag queens have always been unafraid to perform stunts that will catch and keep the attention of both the viewing crowd and random passersby who weren’t watching the show in the first place. In the past, for example, Precious has ended up twirling in the parking lot as she lipsynced toThe Sound of Music’s “Do-Re-Mi.” Drag queens have long lipsynced while hanging upside down from ceilings or stomped runways in ensembles that look about as heavy as they were.

The difference now is that more eyes are on them, and the cheers are growing louder and louder. – Rappler.com