Facebook Twitter Copy URL
Copied
Why do the good ones have to go? We pay tribute to the favorite restaurants we'll miss and which we hope to see again in the future.

MANILA, Philippines – It’s year two of the pandemic, and this year’s not-as-restrictive lockdowns have somehow helped several local businesses and restaurants to recover, albeit not totally, from 2020’s dire circumstances. Things have opened up, people have grown more comfortable dining out, and the food and beverage industry is now returning back to life, with many still hoping and waiting to thrive.

But the F&B industry continues to struggle, and a handful of well-loved names have succumbed to the pandemic’s irreversible effects this year. We had to say goodbye to a few restaurants that we’ll sorely miss. Here we pay tribute to the food establishments gone too soon but which we hope to see again in the near future.

Chocolate Kiss, the iconic fixture at the University of the Philippines (UP) Bahay ng Alumni, already bid their physical stores goodbye in August 2020, but still remained open for takeout and delivery of their signature cakes, pastries, and hot meals. A year later, in June, the well-loved restaurant announced that they’d be permanently closing shop after 23 years. It was a painful goodbye kiss no one was willing to return.

Chocolate Kiss explained that although “the past year of navigating through the lockdowns was quite exciting,” it was not sustainable for their business, which prompted them to “wind things down.”

One last kiss: How iconic resto Chocolate Kiss knew it was time to say goodbye 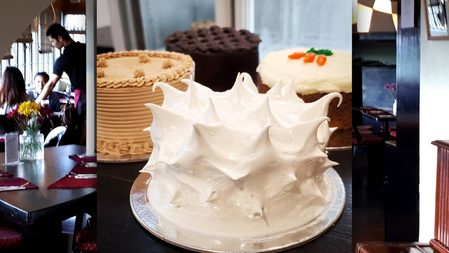 It was a decision “heavily guided by going back to their roots,” owner Ina Flores-Pahati said, as well as reviewing the finances. The café had always relied on a high volume of orders in sustaining its operation, so the difficult decision was prompted by the losses already incurred since the start of the lockdown, as well as the prospect of not being able to operate at full capacity for an undetermined period.

Family-owned Chocolate Kiss first opened its humble doors at the second floor of the University of the Philippines Bahay ng Alumni building inside the UP Diliman campus in 1997. Its menu consisted of comfort food and freshly-baked cakes, making it a go-to chika corner for the older crowd, or a “fancier” dining choice for students looking to splurge their extra allowance for the week, either during a barkada hangout or on a romantic campus date.

Kermit MNL, a favorite among the Poblacion, Makati City crowd, said goodbye to their patrons with a “heavy heart.”

“We have missed you during these trying times. Thank you so much for allowing us the honor of serving you, and for your support the past years. We will miss you all dearly,” the restaurant known for authentic brick-oven pizza and pasta wrote on social media.

Kermit opened its first and only branch in Metro Manila in April 2018 at Molina Street, Poblacion, Makati City, and then its first La Union branch in February 2021. Kermit’s first branch along General Luna Road, Siargao Island was founded by Italian ex-patriate and entrepreneur Gianni Grifoni in 2011.

The small hut grew to be a favorite post-surf grub spot of both locals and tourists, serving up what “might be the best pizza and fresh-made pastas in the country,” Conde Nast Traveler wrote on their website.

Ponseca said that Jeepney’s closure was just the start of planning bigger things for her trailblazing brand. “I want to graduate from being an independent operator into something more formidable with more support. I don’t want this to be the end of Jeepney,” she said. She wanted it to grow into a “fast-fancy” restaurant chain found in multiple cities – “a hybrid of something that is fast-casual and something that is fine-casual.”

Jeepney was known for the award-winning Chori Burger – a brioche bun sandwiching a beef and longganisa patty, spicy banana ketchup, Maggi aioli, atchara pickles, and egg – and promoting the native kamayan-style way of eating in NYC.

Jeepney is Ponseca’s last brick-and-mortar shop in New York, which she founded in 2012. Ponseca opened a second Jeepney branch in early 2021 and a new brand called Tita Baby’s (a Filipino barbecue joint), both in Miami.

In December 2019, Ponseca closed down her other popular East Village Filipino restaurant Maharlika after nine years.

A comfort food favorite among students in the Katipunan area and the Mercato Centrale crowd was B.Wings, which suddenly, silently, and sadly began shutting down operations early 2021. The closure of their sole branch along Esteban Abada was only confirmed in early 2021, when ex-staff of the local wings joint opened their own cloud kitchen and began selling the wings again for delivery.

Casa Daza, chef Sandy Daza’s Filipino restaurant in UP Town Center in Quezon City, permanently closed its doors to the public in February, saying that it was a “difficult decision” and thanked their patrons for their support for the past three years.

Casa Daza still sells their freshly-baked empanadas, buns, and siopao in select stores and mall kiosks for takeout and delivery.

Elbert’s Diner, located the second floor of Powerplant Mall, closed in January, and thanked their patrons for all their support “throughout all these years.”

“We are hopeful that we will be back some day. We are proud of our sandwiches and will do our best to find them a home again,” they wrote.

They were known for their cheesesteak subs, sandwiches, cubanos, smashed burgers, sliders, and hotdogs.

Elbert’s Diner was part of the Elbert’s Concepts Group, owned by Elbert Cuenca, who is also behind brands Elbert’s Pizzeria, Elbert’s Cheesesteak, Elbert’s Steakroom, and Metronome.