Students in anti-Marcos burial protest: ‘We will never forget’ MANILA, Philippines – Filipino millennials went back to the streets.

Hundreds of young people staged a rally against the surprise burial of the late dictator Ferdinand Marcos on Wednesday, November 30, joining other Anti-Marcos groups at the People Power Monument to fight against what they called “historical revisionism” and the abuses during martial law. (READ: November 30 rallies: What protesters demand of Duterte)

The young protesters come from all walks of life. Some arrived in jeepneys, while others marched to EDSA.

For Ateneo de Manila alumna Mima Mendoza, the protest is about being one with the Filipino people.

“As a millennial, I want to be the one to take control of my own country and my own people’s story. I’m here to tell that story, and that story is that Marcos is a dictator and he stole from our country and he killed thousands of our countrymen,” she said.

It was a gathering that usually happens only in collegiate sports. But this time, ADMU and De La Salle University students are fighting for the same cause.

After the two-hour walk from Katipunan, the Ateneo contingent was welcomed at the People Power Monument by contingents from DLSU, the University of the Philippines, and Assumption College, among others.

DLSU student government vice president for external affairs Reigner Sanchez echoed Mendoza’s sentiments that the protest is about not forgetting.

“Together with the Lasallian community, we believe that Marcos is not a hero, and Martial Law should never happen again. We should never forget the dark horrors of our history,” he said. 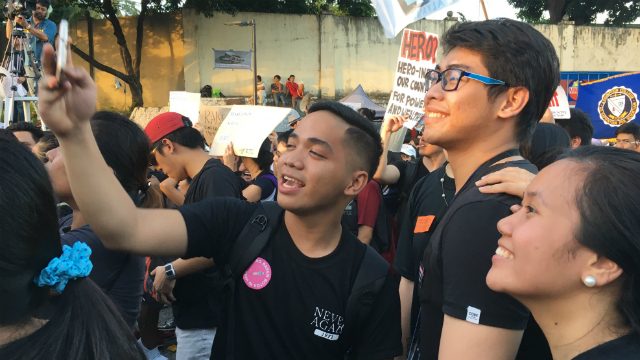 Sanchez added that millennials are at the forefront of the fight against historical revisionism.

“That means that we have to educate our friends about what happened in our past. We should be at the forefront of (engaging) our government and ensuring that martial law will never happen again,” he said.

The series of protests started with the Supreme Court decison to allow the burial of Marcos in the heroes cemetery. When the late dictator was buried on November 18, a series of lightning protests erupted, culminating in the November 25 movement in Luneta and the November 30 protest in the People Power Monument.

Millennials quickly became the face of the protests. For Mendoza, the protest is one way to hold institutions accountable.

“Now is the time for millennials…to keep the integrity and to force integrity on our institutions. That begins with taking control of our history and telling it as it should be. Saying clearly that this is not okay, that we will not stand for this and we want accountability.” – Rappler.com