CALL TO ACTION. Environmental advocates discuss the need for leaders who will act on the effects of disasters during the 4th #AtinAngPilipinas Town Hall on March 26, 2022. (Screenshot from Rappler YouTube Channel)

Facebook Twitter Copy URL
Copied
The 4th episode of the #AtinAngPilipinas Town Hall calls on Filipinos to vote for leaders who do not only act during and after disasters, but even before it strikes

In the high-stakes elections this May, environmental experts and advocates called on Filipinos to vote for leaders who have say in disaster mitigation and response.

Panelists, who are part of the #AtinAngPilipinas townhall on Saturday, March 26, emphasized that government intervention is vital to provide clarity and direction to issues related to environment and climate change. Given this, the outcome of the elections is crucial for a hazard-prone country like the Philippines.

The town hall took off from the #AtinAngPilipinas agenda created by more than 150 organizations, economic and labor advocates who are part of the #PHVote and #CourageON: No lockdown on rights coalitions.

(The Philippines is visited by typhoons every year with marginalized sectors being the most affected. This election season, we need leaders who are trustworthy. We need leaders who will prioritize people and the planet, especially in this time of climate crisis.) 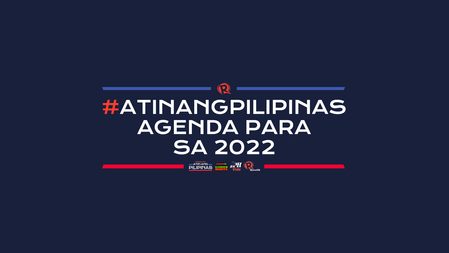 But what should leaders do in times of disasters?

For one, panelists highlighted that national leaders should be at the forefront in strengthening the community’s resilience to disasters.

“Kailangan talaga yung Pangulo natin ay present tuwing sakuna (The President needs to be present during disasters)…Presence is important not just to show empathy, but also to take command so that all the resources needed to deal with the loss and damage of events are dealt with,” Tony La Viña, Energy Collaboratory Director of Manila Observatory said.

In 2020, the hashtag #NasaanAngPangulo trended online as Filipinos called on President Rodrigo Duterte’s presence to demand for leadership and a better, more coordinated disaster response from the national government in the recent typhoons. (READ: As Filipino resilience gets exploited, netizens slam gov’t disaster response).

Taking off from these calls that reveal the gaps in the government’s disaster response, voters will now have the opportunity to use this collective voice as they cast their ballots. In the upcoming elections, panelists also highlighted the importance to vote for leaders who are involved not only during and after disasters, but even before it strikes.

Leaders who can protect vulnerable communities

According to the panelists, management and response to disasters is an important election objective because it carries grave threats to the majority of Filipinos, especially to those under the marginalized sector.

Mai Taqueban, Executive Director of Legal Rights and Natural Resources Center, stressed that rural and indigenous peoples (IP) communities, especially women and children, are among the most vulnerable during disasters. Their susceptibility is caused by mining activities permitted by the government.

In recent years, several environmental groups have been pushing for the implementation of existing environmental laws to safeguard IP communities against natural disasters such as typhoons and earthquakes.

However, attempts to uphold the welfare of this sector have been jeopardized: “The government sees the indigenous people as a threat because they have the answer to our environmental and climate challenges that are against corporate and state interests,” La Viña said in a mix of English and Filipino.

The panelists urged future leaders to end the vilification and harassment against IPs and other environmental defenders by making perpetrators accountable. The government must instead genuinely engage with the IPs for they are the real ‘stewards’ of the environment.

“We need a leader na klaro sa kanya yung karapatang pantao and who will not use state power to push a particular agenda. Someone who will look at development from the punto de vista of welfare and dignity of people,” Taqueban suggested.

(We need a leader who has a clear understanding of human rights and who will not use state power to push a particular agenda. Someone who will look at development from the point of view of the welfare and dignity of people.) 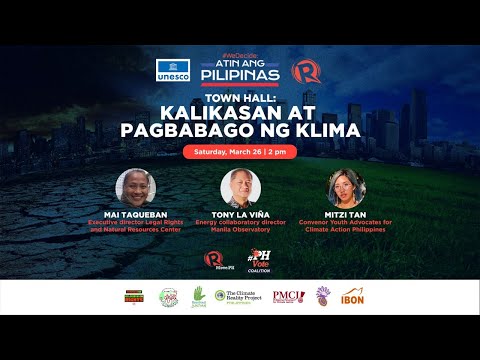 (We need a paradigm shift from our current view of development. How can we have development that is community-centered and will answer our climate emergencies?)

“It is important that we focus on climate education, contextualize [the experiences] of our communities…, and engage the Filipino people in policy-making. We must have research on pro-people adaptation measures,” Tan added.

Although the country already participated in several environmental conferences, pledges, and agreements, the government has been inconsistent with its actual implementation of disaster management and climate change adaptation measures.

La Viña then mentioned that voters must revisit the environmental management history of the Philippines and learn from the fatal actions of our past leaders.

(The Marcos regime in the ‘70s and ‘80s really created a lot of social conflict due to so-called development aggression. If we allow this kind of leadership, more deaths and destruction are certain.)

It is the fourth episode in a series of town halls aimed to zero in on pertinent societal issues, especially in light of the upcoming 2022 national and local elections. The next town hall is scheduled on April 23, this time focusing on peace, order, and respect for human rights. – with reports from Jose Polon/ Rappler.com