NUJP warns AFP for red tagging former UP students: ‘You will be held to account’ Facebook Twitter Copy URL
Copied
'We would normally dismiss this canard as laughably stupid. However, putting the people it names in mortal danger is no laughing matter at all,' says the National Union of Journalists of the Philippines

Armed Forces of the Philippines (AFP) Information Exchange Facebook page, which is administered by the Office of the Deputy Chief of Staff for Civil-Military Operations, posted a list of names of supposedly UP students that they falsely described as having joined the New People’s Army (NPA) and had died or were captured.

In a statement on Saturday, NUJP expressed its dismay to the military office for “shamelessly resorting to such blatant falsehood to push the narrative of UP as the supposed “breeding ground” of enemies of the state.”

“We would normally dismiss this canard as laughably stupid. However, putting the people it names in mortal danger is no laughing matter at all. Especially since AFP units are known to spread disinformation such as this through their own social media accounts,” they added.

NUJP also stated a fair reminder to them, “We shall not let this pass. You will be held to account.”

Among those in the list were journalists Roberto “Bobby” Coloma and Roel Landingin and several other prominent graduates of the University. 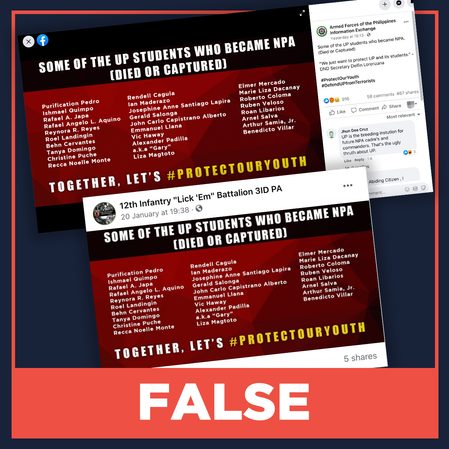 The incident comes almost a week after the government moved to scrap the deal preventing state forces from entering UP campuses that triggered massive outcry from the UP community.

The list, which was posted on Friday evening, January 22, had at least 916 reactions, 58 comments, and 467 shares before it was taken down on Saturday morning. Some of the Facebook pages of military units also shared the post.

For NUJP, the mere fact that these units shared the post to their own pages is very telling that “they believe in the truth of such accusations.”

“We all know too well of the often fatal consequences of red-tagging. It does not matter whether the accusations leveled at targeted personalities or organizations are true or not. It is sufficient that they stand accused,” NUJP added.

NUJP was also alarmed over the real danger that this incident would bring to those accused –  from sharing the accusations to actually taking action against them.

This is especially true as disinformation against activists and journalists has since been widespread. Police officers, for one, have been posting and sharing hateful messages and “fake news,” making their targets vulnerable to online and on-ground attacks. (READ: With anti-terror law, police-sponsored hate and disinformation more dangerous)

“The very real danger is how those who wield the armed might of the state can so easily and brazenly engage in such obvious and deadly falsehoods without any thought to the consequences,” they added.  –Rappler.com