RALLY. Various progressive organizations in Naga and Camarines Sur marched to the streets of Panganiban Drive, Naga City to warn against the possible repercussions if the Marcoses regain power during the 36th anniversary of EDSA People Power on February 25.

MANILA, Philippines – Across the Philippines, Filipinos and progressive groups took to the streets bearing flags, placards, and tarpaulins to recall the lessons learned from the EDSA People Power Revolution as it marks its 36th anniversary on February 25.

From Luzon to Mindanao, Filipinos stressed the need to “never forget” the horrors of Martial Law, especially in the face of massive disinformation networks out to buttress the image of the Marcoses, and in light of  the presidential bid of Ferdinand “Bongbong” Marcos Jr.

Here are some of the protests that were conducted in different parts of the country to commemorate the 36th EDSA People Power anniversary:

Staging an EDSA People Power commemorative march, students and progressive organizations including Alliance of Concerned Students University of the Philippines Baguio (ACS-UPB) and Kabataan Partylist Cordillera wore black as they gathered at the Post Office Park in Baguio.

They called on Filipinos to remember the victims of martial law in the upcoming elections, as another Marcos attempts a return to Malacañang.

“We stand firm with the people’s call against the rise of another dictator. We must never forget! Choose the right candidate in the coming elections for it decides the fate of millions of Filipinos, now and in the next generations,” said ACS-UPB in a Facebook post.

Meanwhile in Naga City and Camarines Sur, various progressive organizations, including Jovenes Anakbayan Naga City and Kadamay, marched to the streets of Panganiban Drive to warn against the possible repercussions if the Marcoses regain power.

Jovenes Anakbayan Naga City emphasized that history has also proven the corruption of the Marcoses, adding that their return to Malacañang through Marcos Jr will only result in its continuation in the country.

FALSE: ‘No proof’ that Marcos couple stole billions from Filipinos (The Marcos family continues to lie in order to stay and regain power.)

(In the upcoming elections this May 2022, the return of the Marcoses in position is in alliance with Duterte, Arroyo, and Estrada. It only shows that the ruling class is working together just to maintain their political power. Fascism and corruption will surely continue under their leadership which has been experienced and proven in our history.)

Bryan Bosque of BAYAN Panay said the protest venue was symbolic for Ilonggos as the regional network of ABS-CBN was forced to shut down in 2020.

The last time ABS-CBN was shut down by the government was in 1972, the beginning of military rule under the late dictator Ferdinand Marcos. It would reopen only in 1986, when the strongman was ousted by the EDSA People Power Revolution. 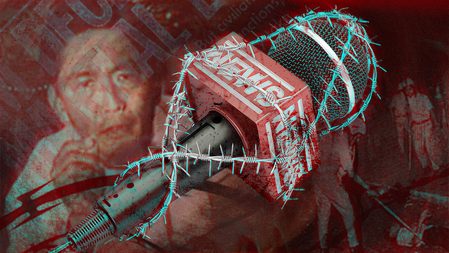 Bosque added that the commemoration of EDSA People Power this year was especially significant because of the rampant disinformation being propagated by the Marcoses.

Raoul Manuel, Kabataan Partylist first nominee, asserted that one way to commemorate the People Power Revolution is to stop the return of the Marcoses, and in turn, their tandem with vice presidential candidate Sara Duterte.

(We Ilonggos, we Filipinos, our celebration of EDSA People Power is towards breaking up this tandem.)

Among the calls carried by protesters is the call to defend press freedom, defend human rights, and uphold justice for the victims of Martial Law.

Led by the Campaign Against the Return of the Marcoses and Martial Law (CARMMA) Cebu, Anakbayan-Cebu and other multi-sectoral groups joined in a walk for good governance and democracy along the streets of Jones Avenue Cebu.

Anakbayan-Cebu called on Filipinos to assert their freedom and democratic rights against malevolent forces that continue to threaten the country.

League of Filipino Students – Bacolod, Kabataan Partylist Negros, and other progressive groups in Negros united at Rizal Park, Bacolod to call on their fellow citizens to not forget past atrocities of the Marcoses as they remember the struggles the city faced during Martial Law.

With the continuing demands of the Negrense peasantry for land and the worsening human rights conditions in Negros Occidental, the Negrosanon youth and other progressive groups amplified their call to resist tyranny and dictatorship, urging Filipinos to stand up against the Marcos-Duterte alliance in the upcoming 2022 national elections.

“Famine and malnutrition became prevalent in Negros Occidental, as job opportunities in the 1980s became scarce and resource stocks compromised. Altogether with the demands of the Negrense peasantry for land and the return of human rights, resistance and mobilization highlighted the political landscape of Negros Occidental,” said League of Filipino Students – Bacolod in a Facebook post.

“In commemoration of the 36th anniversary of the EDSA People Power Movement, may we continue to uphold the spirit of collective action as we stand against the looming return of another Marcos in power. We remain steadfast in calling for justice that the victims of the Marcos regime have yet to receive,” the group added.

During the protest, they recalled the horrors of Martial Law and the worsening socio-economic situation of the Filipino people today, which they believe will further regress if the Marcoses win the upcoming elections.

(There is a lot of misinformation about martial law. Marcos has a big budget to cover up the horrific events of Martial Law.)

As the elections are fast approaching, progressive group Bagong Alyansang Makabayan called on Filipinos to protect the essential truths of history amid attempts to muddle the significance of the EDSA People Power with the rampant spread of disinformation.

It also urged people to reflect upon the importance of the EDSA People Power as an opportunity to prove what the Filipino people can achieve to push back the jaws of exploitation, oppression, and tyrannical rule, and promote changes in the social system.

(This year, it is even more significant to revisit the spirit of EDSA because of the intensified disinformation used by the Marcos family to shamelessly remain in power even though the people ousted them in 1986. It is also a celebration of advancing and expanding the action of the people for real change, which has not been defeated despite the intensifying attacks of the Duterte’s fascist regime.) – with reports from KC Perez and Audrey Dayata/Rappler.com

KC Perez is a Rappler volunteer from the University of the Philippines Diliman. She is a junior taking up a Bachelor of Arts Degree in Philippine Studies, Major in Philippine Literature and Broadcast Media Studies.