Duterte may lecture APEC leaders on ‘finer points of civilization’

Nov 17, 2016 4:41 PM PHT
Pia Ranada
Facebook Twitter Copy URL
Copied
The Philippine leader says he is not aware of what would be discussed at the APEC meeting in Peru but he has 'practiced' his lecture to fellow leaders who would 'make the mistake' of criticizing him 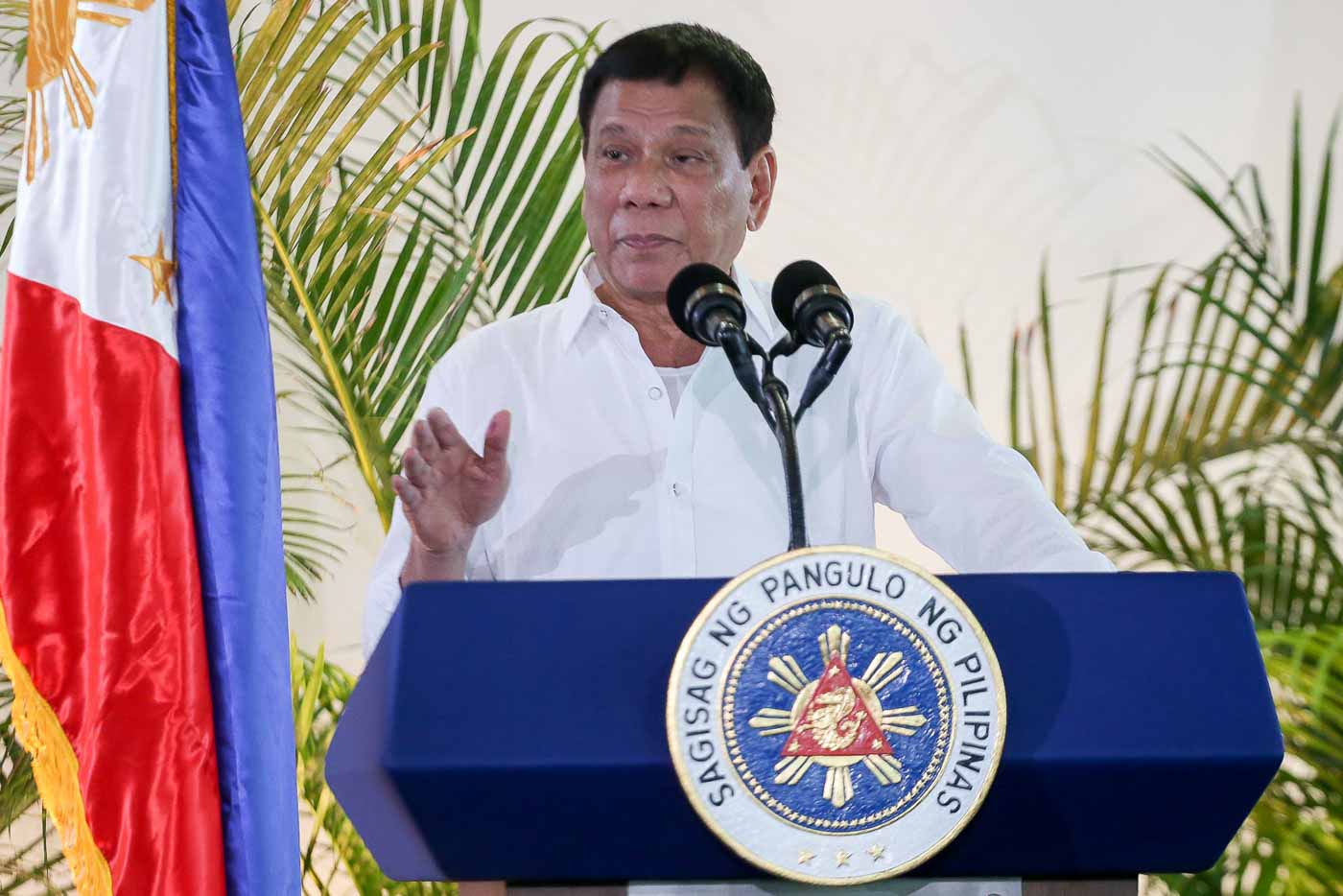 MANILA, Philippines – President Rodrigo Duterte has given fair warning to his fellow leaders attending the Asia-Pacific Economic Cooperation (APEC) meeting in Peru: If they make the “mistake” of calling him out during the meeting, “they will certainly get it” from him.

Duterte made the statement in his departure speech at the Davao International Airport on Thursday, November 17, before boarding a flight to Peru.

(I don’t know what we’ll discuss there. But if they make a mistake again, they want to score against us, I already practiced last night. They will really get it from me. And I will lecture to them on the finer points of civilization.)

He was apparently referring to the “mistake” of criticizing him and his campaign on drugs, which had fueled his attacks against US President Barack Obama, the US, and the European Union, among others.

The agenda at the Economic Leaders’ Meeting are pre-set and limited to topics related to boosting the overall trade and economy of the region.

‘Join me in jail’

Addressing Western leaders, he said in his speech, “Kayo lang palagi tigas eh. You threaten us as if we are your laborers. Sabi ipakulong ako? Ano? Ipakulong – isama ko kayong lahat.“

(You think you’re the only tough ones. You threaten us as if we are your laborers. Imprison me, you say? What? Imprison – I’ll bring all of you with me.)

Duterte has been openly hostile to Western powers like the US and the EU, accusing them of hypocrisy for their concern on possible human rights violations linked to his drug war when they have human rights abuses in their own backyard.

In his international debut at the Association of Southeast Asian Nations (ASEAN) Summit in Laos in September, Duterte shocked a room of world leaders and diplomats by showing photos of the US’ violent pacification of Moros in Mindanao in the 1900s instead of reading a prepared speech at the East Asian Summit attended by Obama.

Duterte had intended to show the human rights violations Filipinos suffered under the US colonial government, after Obama and the US State Department expressed concern over possible human rights abuses in Duterte’s campaign against illegal drugs.

‘I’m not their president’

Apparently, his anti-Western rhetoric was not that popular among his own Cabinet members, Duterte himself revealed in his departure speech.

“Lahat sa Cabinet, sullen silang lahat. [Finance Secretary] Sonny [Dominguez] said, ‘You’re the most unpopular leader there in Europe.’ Sabi ko, ‘Never mind, Son, I’m the President of the Philippines, I’m not their President. I don’t give a shit.”

(All of them in the Cabinet were sullen. Sonny said, ‘You’re the most unpopular leader there in Europe.’ I said, ‘Nevermind Son, I’m the President of the Philippines, I’m not their President. I don’t give a shit.)

When Duterte attends the APEC Summit this weekend, he will be speaking to leaders of countries vital to the Philippine economy.

Duterte himself acknowledged the importance of the APEC meeting to the Philippines in the prepared portion of his departure speech, which comprised the first part of his address. He said he hoped to bring home results from what he called a long and costly trip.

“This will be an important opportunity for the Philippines to work closely with our economic partners in the region, to take stock of the efforts to facilitate economic growth and prosperity in the Asia-Pacific, and to determine ways of moving forward to achieve our shared goals,” he said, reading from the prepared statement.

He said he will update APEC leaders on improvements in the Philippine business climate, with his fight against crime and corruption as among the “building blocks” of a strong economy.

“In the meetings, I will bring to the fore key components of my 10-point Socio-Economic Program, particularly improvements in doing business through more efficient and responsive governance, massive investments in new infrastructure, a new focus on the rural development, and increased investments in human capital,” he said.

“I will highlight government policy support as well as efforts to address corruption and criminality as building blocks of a strong and resilient economy aimed at inclusive and continued growth,” Duterte added.

He said he will also bring his core message, that the Philippines is open for business. “We will do everything to make sure that business, particularly our MSMEs, will thrive and flourish – small and medium,” Duterte said.

This year’s APEC meeting is themed  “Quality Growth and Human Capital Development: A Foundation for Sustainable Growth in the Asia-Pacific.”

APEC is the highest-level, most influential economic forum in the Asia-Pacific. With 21 member economies, it accounts for nearly half of world trade, and about 57% of global gross domestic product (GDP). The Philippines hosted the APEC meeting last year. (READ: APEC what? An explainer on Manila’s high-profile week)

Duterte headed to Peru on the same day that the government reported that the economy grew by 7.1% in the third quarter of the year, or the first 3 months of the new administration. In his speech, however, Duterte said the Philippine economy “remains on the runway” and has not yet taken flight. – Rappler.com