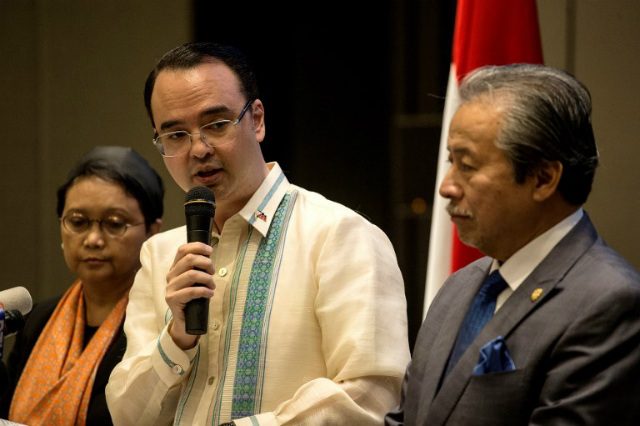 Facebook Twitter Copy URL
Copied
The Philippines, Indonesia, and Malaysia will also study a proposal to 'stop the flow of terrorist financing' after a rare security meeting

MANILA, Philippines – The Philippines, Malaysia, and Indonesia agreed to study a plan to “contain” the spread of terrorism through social media, as they capped a rare meeting in Manila on Thursday, June 22.

The 3 countries included this in a 15-point proposed plan of action finalized after their meeting at Conrad Manila in Pasay City.

The meeting was held after recent terror attacks in the region. These include a suicide bombing at a Jakarta bus terminal on May 24, as well as clashes between Philippine government troops and local terrorists in Marawi City since May 23.

In the 3 countries’ proposed plan of action, one proposal is to “contain the spread of terrorism and terrorism-related content in the cyberspace, particularly in social media.”

It also includes proposed plans to “stop the flow of terrorist financing” and to address “the root causes” of terrorism, including drugs, crime, poverty, and social injustice.

In an interview with reporters after the meeting, Cayetano said the Philippines, Indonesia, and Malaysia plan to combat the terrorist Islamic State (ISIS) “not only through arms but also through education and also through communication.”

Cayetano told reporters, “We take note that social media is also heavily being used not only to connect the terrorists with each other, the extremists, but also to recruit. So we also have to be more creative than the extremists and terrorists.”

Cayetano was then asked if there will be a regional effort to regulate social media to stop terror.

Referring to the terrorists’ use of social media, Cayetano replied, “I don’t think it’s as much as regulating but more of identifying how they’re using it, what they’re using, and then how to block these.”

Rappler CEO and executive editor Maria Ressa has reported about ISIS’ use of social media to attract new recruits as young as 15.

“The spread of radicalization on social media is so alarming that governments, the private sector and civic society are belatedly coming together to find a way to protect their children. The goal: to find ways to win the war they are losing – a battle for the hearts and minds of disenfranchised youth, primarily Muslim, around the world,” Ressa reported in March 2015. (READ: How to fight ISIS on social media)

‘More worrying’ due to social media

The meeting in Manila was closed-door, but the foreign ministers’ opening remarks – which were open for coverage – showed how crucial social media is for the 3 countries.

In her opening remarks, Marsudi cited the foreign terrorist fighters (FTFs) and social media as factors that worsen the threat of terror.

“It is incumbent upon us to embark on taking concrete action,” Marsudi said. “This is also due to the fact that the threat of terrorism is even more worrying because of the FTFs and social media factors.”

Anifah first mentioned how “terrorists today welcome death for others and also for themselves,” in reference to suicide attacks. “It is far more difficult to stop people who are willing to die,” he said.

“Secondly, technology has enabled terrorists to spread the message faster and more broadly than ever before. They have probably been experts in using social media to recruit followers in faraway countries,” Anifah said.

He said the third factor is “a sense of dissatisfaction, humiliation, and alienation” among vulnerable sectors. “Terrorists now have exploited these to their advantage,” the Malaysian foreign minister said.

Speaking after Anifah, Cayetano began his opening statement by quoting from the Bible.

Cayetano said: “The Book of James tells us that faith without action is dead. Islam is a religion that also teaches that their faith and their actions go together.  In fact all great religions of the world teach faith with action.”

“The similarities are that the basis of this action should be love,” Cayetano said.

“The basis of the extremists or terrorists is fear, hate, and violence. Thus terrorism is an instrument of putting actions into their belief. Christ teaches love. Islam teaches love. All great religions teach love. And these extremists and terrorists are not real followers of their claimed religions,” Cayetano said. “This is nothing new.”

Cayetano said Thursday’s meeting was called so that the 3 countries can help “and care about each other.”

“While the battle is now in the hands of the Armed Forces, let us not lose sight that drugs, crime, poverty, and injustices create fertile ground for extremism. The struggle to uplift the quality and dignity of each life is the ultimate struggle,” Cayetano said. – Rappler.com