Castillo’s parents: Aegis Juris treated our son ‘like an animal’

Sep 25, 2017 8:30 PM PHT
Camille Elemia
Facebook Twitter Copy URL
Copied
'The boy we had cherished, who brought us so much pride and joy, he had many hopes and dreams... We are devastated,' says the father of Horacio Castillo III in a Senate hearing 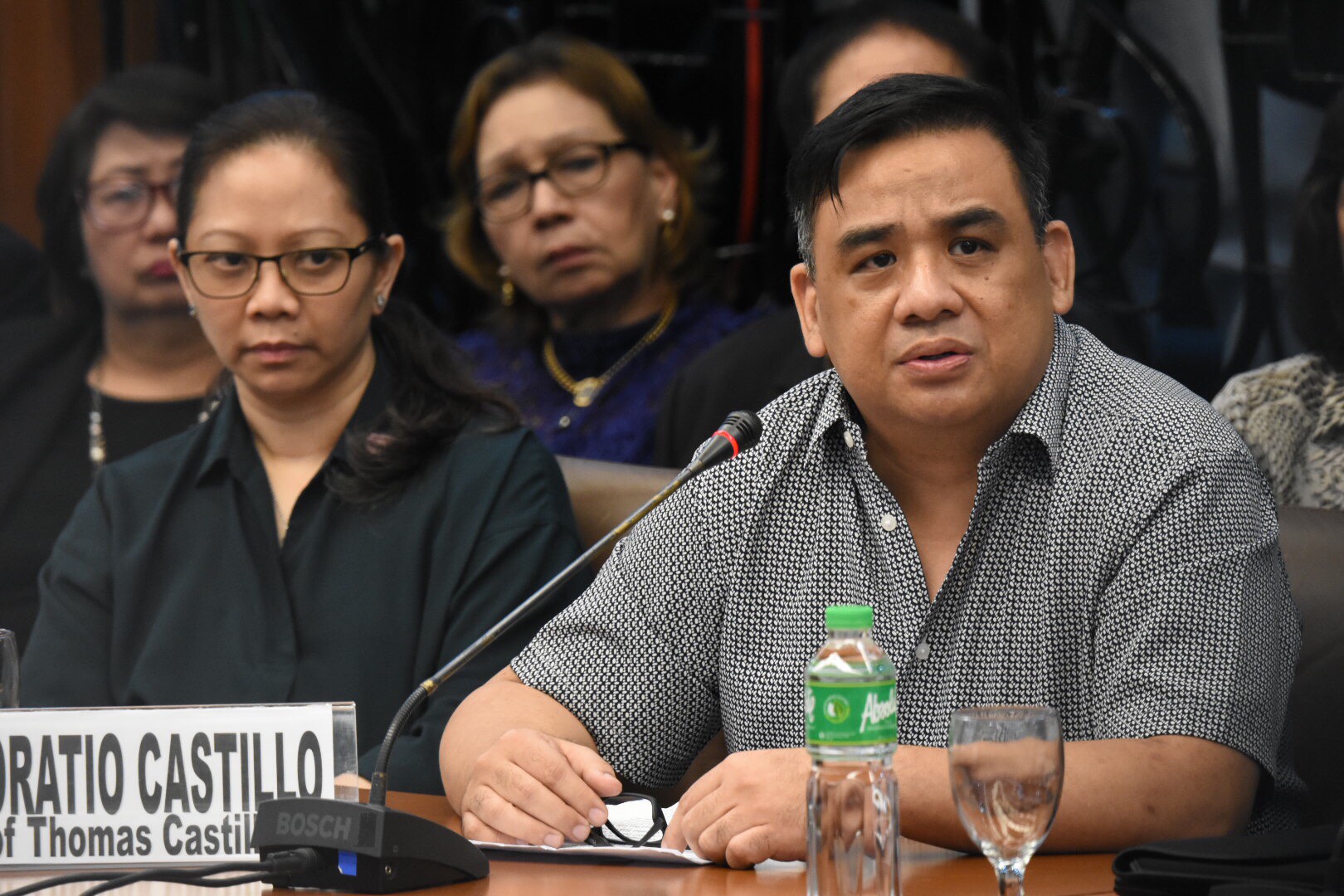 MANILA, Philippines – The parents of Horacio “Atio” Castillo III, the University of Santo Tomas (UST) freshman law student who died due to hazing, condemned the Aegis Juris fraternity during a Senate hearing on their son’s death.

Horacio Jr and Carmina Castillo also faced for the first time John Paul Solano, the primary suspect in the killing, who claims he brought their son to the hospital upon the request of other fraternity members.

Reading from a prepared statement on Monday, September 25, Atio’s father decried how the organization treated their son “like an animal.”

“We are no different from other parents. We live our lives for our children, wishing to always shield them from harm, to shelter from injustice… We will forever be tormented that the Aegis Juris invited [our son] only to treat him like an animal,” an emotional Castillo said.

“After killing and dumping him, they only informed us on September 18 or a day later. We want to know the truth of what happened,” he added. “Only the Almighty God can judge you. But your actions now, whether of courage or cowardice, will forever define you, your fraternity.”

Castillo said Atio had big dreams, which their family shared. His aspirations were abruptly ended by violence.

“The boy we had cherished, who brought us so much pride and joy, he had many hopes and dreams. He wanted to be a lawyer, a senator, and even justice of the Supreme Court. We dreamed all of this with him. We are devastated,” Castillo said.

He recalled that their son told them he would be home from a “welcome ceremony” by morning of Sunday, September 17.

They waited in agony and despair and even looked for their son at the UST Hospital.

“Nightfall came… it was already 9 pm, we were really, really, really worried. At 10 [pm], my wife said we should go to UST Hospital, maybe Atio is confined there. Immediately we got up and proceeded to the UST Hospital. He wasn’t there,” Castillo said.

Later that night, the parents received an anonymous text message, telling them that their son was at “CGH,” which was not clear to them at first.

Upon realizing it was the Chinese General Hospital near UST, they rushed there on Monday morning, September 18. The nurses did not know their son’s name until they described him as a “medium-built 22-year-old boy from UST.”

“What they said was that we have here a person of that built. The nurse I was talking to said that person was wearing a UST political science shirt,” Castillo said.

Castillo urged other fraternity members to come forward, as he vowed they “will not stop, will not let any stone unturned, any resources untapped” until they find justice for their slain son. (READ: Facebook Messenger chat may give clues to Castillo’s hazing death)

He also urged other UST students and classmates of their son to speak up and shed light on the case. (READ: DOJ offers protection to witnesses in killing of Horacio Castillo III) – Rappler.com