Duterte to ICC: ‘If you find me guilty, go ahead’

Feb 9, 2018 11:15 PM PHT
Mick Basa
Facebook Twitter Copy URL
Copied
Duterte taunts the Office of the Prosecutor of the International Criminal Court (ICC) which recently launched a preliminary examination to determine whether there is sufficient evidence to file a case under its jurisdiction 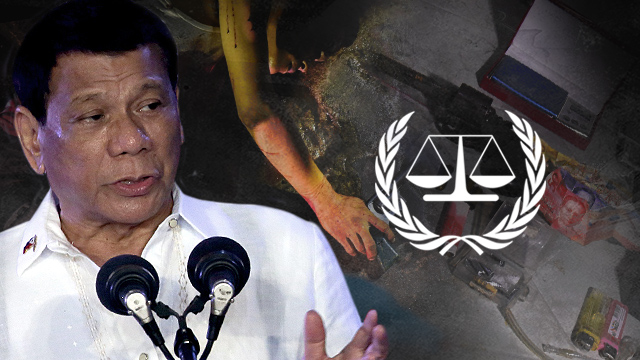 DAVAO CITY, Philippines – President Rodrigo Duterte on Friday, February 9, welcomed an international tribunal’s first step to determining whether it could prosecute him for his alleged involvement in the killings done in the country’s war against drugs.

“I welcome you. And if you find me guilty, go ahead. So be it,” he said at a press conference at Matina Enclaves in Davao City.

Duterte was taunting the Office of the Prosecutor of the International Criminal Court (ICC) which recently launched a preliminary examination to determine whether there is sufficient evidence to file a case under its jurisdiction.

“I don’t want imprisonment. I beg of you to find a country where they execute,” Duterte told reporters in a press conference in his hometown Davao City.

Earlier, ICC Prosecutor Fatou Bensouda said her office has been keeping an eye on the Philippines since July 2016 at a time the country began its campaign against drugs.

The Palace since then has welcomed the move, saying the President “is sick and tired of being accused.”

On Friday’s press conference, Duterte challenged the ICC, saying, “Are you worried about the lives of the criminals? Then take a look a the miserable (problems) of our country.”

He continued, threatening that he would withdraw the Philippines from the ICC, the world’s first treaty-based permanent international criminal court that aims to end impunity.

Article 127 of the Rome Statute states that withdrawal of any state party from the ICC will only take effect a year after the secretary-general of the United Nations is notified through a letter. Criminal investigations and proceedings will still go through as long as they commence prior to the date on which the withdrawal became effective. – with reports from Jodesz Gavilan/Rappler.com